We look at the widespread impact of the government shutdown on Native American communities, as the Indian Health Service goes understaffed and a federally funded food delivery program to Indian reservations has halted. Democratic members of Congress held a hearing Tuesday on the effects of the shutdown on health, education and employment in Native communities. We speak with Mark Trahant, editor of Indian Country Today and member of the Shoshone-Bannock Tribes.

AMY GOODMAN: This is Democracy Now! I’m Amy Goodman, as we continue to look at the devastating impact of the longest government shutdown in U.S. history, now turning to Native America, communities feeling its effects at a disproportionate rate, Native Americans reporting shortages of medicine as the Indian Health Service goes understaffed, while a federally funded food delivery program to Indian reservations has halted.

In a recent letter sent to President Trump, a coalition of Native groups wrote, “On tribal lands, the federal government assumed the responsibility to provide basic governmental services like health care, public safety, and education as a part of its treaty negotiations with tribal nations. The Bureau of Indian Affairs (BIA) and the Indian Health Service (IHS), the primary agencies responsible for providing these services, either directly or through compact and contracts with tribal governments, are both currently hamstrung by the shutdown,” they wrote.

Democratic congressmembers held a hearing Tuesday on the effects of the shutdown on health, education and employment in Native communities. Aaron Payment, chair of Sault Ste. Marie Tribe of Chippewa Indians, spoke at the hearing.

AARON PAYMENT: This shutdown violates the trust responsibility to tribal governments and adds to the trail of broken treaties. Federal agencies that provide critical government services to our nations are caught up in unrelated politics over funding for a southern border wall. Meanwhile, our tribal welfare hangs in the balance. No matter who is at fault, the shutdown threatens to abrogate the treaty and trust obligation to tribes. Federal funding that tribes receive is woefully inadequate to begin with, yet is based on the cessation of 500 million acres of land that American Indian tribes ceded to the federal government. My tribe and four other tribes in Michigan, in the 1836 Treaty of Washington, ceded 14 million acres of land in exchange for our rights to hunt and gather and fish, and health, education and social welfare, into perpetuity. Tribes prepaid, in full, for our federal funding. Since we cannot foreclose on the land, we expect the federal government to fulfill the treaty and trust responsibility. I’m here to remind the Trump administration that your mortgage payment is due.

AMY GOODMAN: For more, we go to Washington, D.C., where we’re joined by Mark Trahant, editor of Indian Country Today, member of the Shoshone-Bannock Tribes.

Mark, describe what’s happening as a result of the shutdown to Indian country.

MARK TRAHANT: It really is, across the country, a pretty significant, devastating impact. And health would be a great one, where people are worried about access to medicine, access to basic services. The Indian Health Service is still operating, but folks are not being paid. It’s getting harder to refer people outside of the system.

MARK TRAHANT: Most of the employees across the board at the—the Indian Health Service is the largest employer in Indian country, direct employer, over 10,000 people. It’s interesting we mentioned the Coast Guard earlier, but there are actually seven uniformed branches of the United States. And three of those branches, the Coast Guard, the NOAA officers and the Public Health Service are all in different aspects of this shutdown. And in many reservation clinics, it’s the Public Health Service that has physicians and dentists and some of the other folks serving tribal members.

AMY GOODMAN: And what do you think about the fact that the whole shutdown is based on President Trump wanting to build this wall on the southern border?

MARK TRAHANT: It really is crazy, especially when you think that it’s not a $5.7 billion project, it’s just a down payment. And if this is to go end to end, it’s going to be a much longer term, because we’re really talking about $25 [billion] or $30 [billion] or $40 billion. And this dispute is not going to go away unless there’s a resolution. And that’s why I think it’s so important that the conversation get broader than just what it is.

AMY GOODMAN: You know, we just played that clip from the congressional hearing. What difference does it make that we have this first, just this month? Two Native American women, for the first time, have entered Congress. You have Deb Haaland from New Mexico as well as Sharice Davids from Kansas. The significance of this?

MARK TRAHANT: The significance of that was just striking. For the first time involving a Native community, that leadership of the House Democrats turned to these two Native American congresswomen, Sharice Davids and Deb Haaland, and said, “Why don’t you ask the questions first?” And so, it started with a frame of here’s what Indian countries think, defined by Indian country. And if you think of the long narrative of this country, that is just a shift in many, many ways, that’s—it’s inspiring. That part of the story, I think, is, wow, this is the way it should have been a long time ago.

AMY GOODMAN: This is Kerry Hawk Lessard, executive director of Native American Lifelines, which offers health services in Baltimore and Boston, addressing the hearing on Tuesday.

KERRY HAWK LESSARD: The partial government shutdown is having dire consequences for American Indian healthcare, including urban Indian people and urban Indian health. The federal government has an affirmative obligation to provide healthcare to our people. This trust responsibility stems from treaties and long-standing U.S. policy and jurisprudence. The shutdown of IHS is directly at odds with that obligation. … The impact of an IHS shutdown is that already chronically underfunded facilities are forced to make extremely difficult decisions without any other options. Facilities will not be able to provide care to patients.

AMY GOODMAN: So, Mark Trahant, final comment on what you feel people need to understand about how this government shutdown, in all aspects—education, food, health, employment, treaty obligations—is affecting Native America?

MARK TRAHANT: It’s hard to understate how important the role of the federal government is in a tribal community—and you’re already dealing with a very poor community, in many cases—and to have that money stripped out of a community, that circulates, even not just the payroll, but so many other ways, to have that taken away so suddenly.

I mean, one of the things that was striking in Chairman Payment’s testimony was how poorly planned the shutdown was. During the last shutdown, the Bureau of Indian Affairs and other agencies started talking to tribes early, pre-paid a lot of the bills, tried to arrange for things so that there would be a mitigation. This time it just happened. It happened so suddenly because it was after Trump changed course. And that really added to the misery, I think, of what’s going on.

Indian Health is a great example because it’s already so underfunded. It’s the lowest-cost health system in the country. And taking resources out of that just makes it worse.

AMY GOODMAN: Mark Trahant, thanks so much for being with us, editor of Indian Country Today, member of Shoshone-Bannock Tribes.

This is Democracy Now! When we come back, we go to the first day of hearings for the EPA chief-designate Andrew Wheeler, who is a coal—former coal lobbyist. Stay with us. 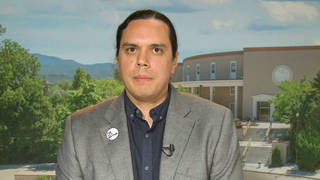