Regime Change Is Not the Answer: Rep. Ro Khanna Speaks Out Against U.S.-Backed Coup in Venezuela

More information has come to light about the direct U.S. role in an attempted coup in Venezuela. The Wall Street Journal reports Vice President Mike Pence called opposition leader Juan Guaidó on the night before he declared himself to be president, pledging U.S. support for his actions. Venezuelan President Nicolás Maduro has accused the United States of attempting to wage a coup. Meanwhile, U.S. Secretary of State Mike Pompeo has named Elliott Abrams to be his special envoy to Venezuela. Abrams is a right-wing hawk who was convicted in 1991 for lying to Congress during the Iran-Contra scandal, but he was later pardoned. Abrams defended Guatemalan dictator General Efraín Ríos Montt as he oversaw a campaign of mass murder and torture of indigenous people in Guatemala in the 1980s. Ríos Montt was later convicted of genocide. Abrams was also linked to the 2002 coup in Venezuela that attempted to topple Hugo Chávez. We speak to Ro Khanna, Democratic congressmember from California.

AMY GOODMAN: We begin today’s show looking at Venezuela, where President Nicolás Maduro has accused the United States of attempting to wage a coup. Last week, the U.S. and several other nations recognized opposition leader Juan Guaidó, the president of the National Assembly, to be Venezuela’s president. Israel and Australia have become the latest countries to recognize Guaidó. Meanwhile, Britain, Germany, France and Spain have announced they, too, will recognize Guaidó, if Maduro does not call for new elections within eight days. President Maduro has rejected the request but says he’s open to dialogue with the opposition.

Meanwhile, more information has come to light about the direct U.S. role in the attempted coup. The Wall Street Journal reports Vice President Mike Pence called Juan Guaidó on the night before he declared himself to be president, pledging U.S. support for his actions.

SECRETARY OF STATE MIKE POMPEO: Elliott’s passion for the rights and liberties of all peoples makes him a perfect fit and a valuable and timely addition. … Elliott will be a true asset to our mission to help the Venezuelan people fully restore democracy and prosperity to their country.

AMY GOODMAN: Elliott Abrams is a right-wing hawk who was convicted in 1991 for lying to congress during the Iran-Contra scandal, but he was later pardoned by President George H.W. Bush. Abrams defended Guatemalan dictator General Efraín Ríos Montt as he oversaw a campaign of mass murder and torture of indigenous people in Guatemala in the 1980s. Ríos Montt was later convicted of genocide. Abrams was also linked to the 2002 coup in Venezuela that attempted to topple Hugo Chávez.

The Democratic leadership in Congress has largely supported the Trump administration’s actions, but there have been some voices of dissent.

Welcome back to Democracy Now! Can you respond on what has taken place in Venezuela and the U.S. role in that, from Vice President Pence to Secretary of State Pompeo to national security adviser John Bolton?

REP. RO KHANNA: Well, it’s as if we never learned our lesson. We should have learned by now that the effort for regime change doesn’t work and that we never plan for whether it’s going to be successful and what comes next. This was the mistake we made in Syria. The entire Washington consensus was that if we supported the rebels, somehow they would topple Assad. Now, Assad was a brutal war criminal, but that was ineffective. And what it led to was Assad actually escalating the bombing and more civilians dying.

The same situation applies here. Look, I’m not going to defend Maduro’s policies. There have been, in my view, unfair elections and hyperinflation. But there is absolutely no plan that would suggest that any effort at regime change would be successful, and there is no plan for what would happen after a civil war, which would just lead to more mayhem and violence.

AMY GOODMAN: And this information that came to light in The Wall Street Journal, reporting Vice President Mike Pence called Juan Guaidó the night before he declared himself president of Venezuela, pledging U.S. support for his actions, Congressman Khanna?

REP. RO KHANNA: Well, the Democrats should be appalled by that and criticizing that. I mean, for all of our legitimate concerns about Russian interference in our elections, where we get concerned if a journalist appears on Russian television and a member of Congress talks to them, imagine if someone were calling the opposition in our country. We would be furious, justifiably furious. And so, it makes no sense that our vice president would be calling and interfering in politics in Venezuela.

What we ought to be doing is working through international institutions and laws, calling for human rights, but not getting involved in a potential civil war. And again, this is no defense of Maduro. Everyone recognizes that there have been extrajudicial killings there, that his economic policies have led to hyperinflation. But the reality is that when we have intervened, in places like Syria, in places like Libya, what has—the consequence has been that things have gotten worse. And for some reason, the people who have led all these interventions are still able to dictate American foreign policy. It’s almost as if failure is the qualification to be part of dictating what we should be doing in Venezuela.

AMY GOODMAN: And so, what are you calling for in Congress? Among those who have criticized what the U.S. administration is doing—well, you have Dick Durbin, senator, Nancy Pelosi actually supporting Guaidó. But then you have people like yourself, Ilhan Omar and others, Bernie Sanders, also critical of the Venezuelan government but critical of what the U.S. is doing. What are you demanding in Congress right now?

Second, we do have a pathway for a solution. Everyone knows that the only way that we are going to see greater progress in Venezuela is to have a negotiated settlement with the parties, to have an honest broker. Uruguay, Mexico, the Vatican are trying that. The United States can lend credence to that effort and be involved in that effort of trying to come to a negotiated settlement.

And finally, these sanctions are not working. Even people completely opposed to Maduro’s policies have said that the sanctions are only making matters worse. They’re hurting the poorest of the poor in Venezuela. And we need to really look at ending those sanctions.

AMY GOODMAN: Congressmember Khanna, before we go, the government shutdown, the longest in U.S. history. President Trump did not get funding for his border wall, but the effects of the shutdown and the possibility that in three weeks he’ll shut the government down again?

REP. RO KHANNA: Well, it was a total wasted effort that hurt ordinary Americans. I mean, if he was going to ultimately cave, there was no reason for hundreds of thousands of workers to have gone without a paycheck. Millions of contractors aren’t going to get back pay. And I’m concerned that on February 15th he’s going to try to declare a national emergency. Now, I heard yesterday Senator Rubio and Senator Blunt saying that a national emergency would be a bad idea. But the question is: Is that just going to be rhetoric, or are they actually going to stand up for the Constitution? Because Congress and the Senate can pass a joint resolution—it requires a veto-proof majority—if the president does declare an emergency, to overrule that emergency. And I would like the Republicans who are legitimately telling the president not to go down that road to say that they would actually vote against him to overturn that emergency, or we’re going to have another crisis in this country.

AMY GOODMAN: Ro Khanna, we want to thank you for being with us, Democratic congressmember from Silicon Valley, from California, leading critic of U.S. military interventions abroad. This is Democracy Now! Back in 30 seconds.

AMY GOODMAN: That’s Eine kleine Nachtmusik by Mozart, performed by the Rivne Symphony inside a mall in Rivne, Ukraine, that I taped in December. Sunday was International Holocaust Remembrance Day. During the Holocaust, Rivne, Ukraine, was the site of the Sosenki Forest Massacre, where the Nazis murdered over 23,000 Jewish men, women and children between November 7th and 9th, 1941. Rivne is the birthplace of the mother of Leonard Bernstein, the conductor of the New York Philharmonic; the mother of the late Israeli writer Amos Oz; as well as the birthplace of my grandmother, Sonia Bock, born in Rovno in 1897. 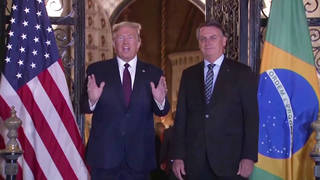