In Colombia, hundreds of thousands of people took to the streets Thursday in the largest national strike the country has seen in years. Labor unions, students, teachers, indigenous and Afro-Colombian activists joined in peaceful marches across urban and rural Colombia as anger mounts against right-wing President Iván Duque and his Cabinet. The protests were triggered by Duque’s proposed labor reforms and cuts to the pension system, as well as a recent military airstrike against a camp of alleged dissident rebel drug traffickers which killed eight children. Police responded to the movements with repressive tactics and tear gas in the cities of Bogotá, Cali and Medellín. Colombia’s borders with Venezuela, Ecuador, Brazil and Peru were shut down in response to the national strike. Indignation against Duque’s government has brewed since the U.S.-backed president took office in August 2018, and social activists have continuously denounced Duque’s sabotage of Colombia’s historic peace accords, which were signed in 2016 after half a century of war. We speak with longtime activist Manuel Rozental, who joins us from Cali, Colombia. He has been involved with grassroots political organizing with youth, indigenous communities, and urban and rural social movements for four decades.

StoryJul 21, 2021Colombia Erupts in Protest Again over Right-Wing Gov’t Tax Plans Even as “Solidarity Is Criminalized”

AMY GOODMAN: We begin today’s show in Colombia, where hundreds of thousands of people took to the streets Thursday in the largest national strike Colombia has seen in years. Labor unions, students, teachers, indigenous and Afro-Colombian activists joined in peaceful marches across urban and rural Colombia as anger mounts against right-wing President Iván Duque and his Cabinet. Their peaceful movement was met with police repression and tear gas in Bogotá, Cali and Medellín. In Bogotá, riot police fired tear gas at protesters who blocked major transportation routes. Others gathered in Bogotá’s historic Simón Bolívar Plaza, singing the national anthem in unison, where they were also met by police forces shooting tear gas.

A government-imposed curfew was reported in the city of Cali, the capital of the Cauca region. The Colombian borders with Venezuela, Ecuador, Brazil and Peru were shut down in response to the national strike. The protests were triggered by Duque’s proposed labor reforms and cuts to the pension system, as well as a recent military airstrike against a camp of alleged dissident rebel drug traffickers which left eight children dead. This is one of the protesters in Bogotá.

PATRICIA RIANO: [translated] This is the sentiment of the people. The people are bored of social injustice. They’re killing our social leaders, our cultural identity. Our indigenous communities are in danger. And the economic, political and labor reforms do not benefit the Colombian people.

AMY GOODMAN: Indignation against Duque’s government has brewed since the U.S.-backed president took office in August of 2018. Social activists have continuously denounced Duque’s sabotage of Colombia’s historic peace accords, which were signed in 2016 after half a century of war, as well as the endemic of killings of indigenous, Afro-Colombian and other social leaders under his administration. Since the signing of the peace accords, at least 700 social leaders have been murdered in Colombia.

For more, we go to the city of Cali, Colombia, where we’re joined by longtime Colombian activist Manuel Rozental. He has been involved with grassroots political organizing with youth, indigenous communities, and urban and rural social movements for four decades, exiled several times to Canada for political activities.

Manuel, welcome back to Democracy Now! I hope we can keep you on the line. I know that the line is a little tricky right now, the internet. But if you can talk about what happened across Colombia yesterday?

MANUEL ROZENTAL: It’s unprecedented, without any doubt. There were millions — not thousands, millions — of Colombians marching yesterday. We were at three different marches in the city of Cali yesterday, and I had never seen anything like this before.

I have to clarify several things. One is, this march and this national strike was not convened by any single organization. It’s the entire people of this country who are fed up, and we just gave ourselves a date and convened ourselves to the street. So, nobody — no political party, no social movement, no group, no structure — controls this strike. It’s a sentiment we all have against a government.

And not 18 children that were killed recently in Caquetá by the armed forces of Colombia, forcing the resignation of the minister of defense, but, according to Gustavo Petro, former presidential candidate and member of the Senate, more than 300 children have been killed by the Colombian army in eight years. Close to 800 indigenous and popular social leaders have been murdered since the peace agreement in November 2016. Labor reforms [inaudible] all the [inaudible] and mafia policies linked to drug trafficking, murdering everywhere, and we are fed up.

So we marched, we mobilized, and we expressed our anger. I can tell you clearly, today President Duque and President Uribe, who is behind him, they have nothing to do in power in Colombia. Nobody in Colombia, of the people who marched yesterday, like him. He has [inaudible] —

AMY GOODMAN: Manuel, let me play Colombian President Iván Duque speaking about the role of the military in anticipation of yesterday’s national strike.

PRESIDENT IVÁN DUQUE: [translated] It is these military forces which have always guaranteed the implementation of democracy, the ones that have always guaranteed freedom of speech in our territory. I also take this as the opportunity to say that it is the military forces which should guarantee peaceful protests as an expression of democracy, but they are also the same forces that should protect our citizens so that there is no vandalism or aggressions, nor allow that anyone shall pretend to usurp the functions of the military forces.

AMY GOODMAN: If you can respond, Manuel Rozental, to what President Duque said about the military ensuring freedom of speech and peace? Manuel, we can’t hear you. Well, we’re going to try to reconnect with him in a moment, but I wanted to also ask about earlier this month, five indigenous leaders massacred in the semiautonomous indigenous reservation of Nasa Tacueyó. Among those murdered was Cristina Bautista, the chief of the area. President Iván Duque vowed to deploy 2,500 military troops to the region. He blamed dissidents of the FARC guerrilla rebel group who opposed the country’s peace accords, but police still haven’t made any arrests, and no suspects have been named in the massacre.

Since the signing of the accords in 2016, at least 700 social leaders have been murdered in Colombia, according to the Institute for Development and Peace Studies, with Afro-Colombian and indigenous activists at the forefront of the violent targeting. Earlier this month, Democracy Now! spoke with your partner, Manuel, Vilma Almendra, a Nasa-Misak woman and indigenous leader, this in a Skype interview about that massacre, and asked her what her message was to the American audience about the ongoing violence in Colombia. The U.S. government has for decades funded the war on drugs in Colombia and currently backs the government of the right-wing President Iván Duque. This was her response.

VILMA ALMENDRA: [translated] As a woman, Nasa-Misak, I would ask the people, the processes and the movements to understand that what is happening in Colombia, the war they are inflicting upon us, is precisely to guarantee the reproduction of the patriarchal, colonial and capitalist system to accumulate wealth there in the United States. Who is profiting with this blood, with death, with displacement, with the destruction of our autonomy here?

Understand that we are being subjected to war to guarantee the preservation of a system that not only exists in Colombia but in different parts of the world and that the challenge we have as peoples and movements is to try to see beyond this state that inflicts war. We need to self-organize, defend ourselves autonomously and have autonomous resistance be on the institution, which is the one that is killing us.

AMY GOODMAN: That’s Vilma Almendra. We are speaking to her partner Manuel Rozental, both Colombian activists with decades of experience in grassroots political organizing with youth, indigenous communities, urban and rural social movements. We’ll continue to cover the mass protests in Colombia, again, yesterday, with well over a million people in the streets of the country, the largest mass protest Colombia has seen in years.

This is Democracy Now! When we come back, we’ll talk about the defense of Julian Assange. Stay with us.

U.N. Rapporteur: Julian Assange Has Faced Psychological Torture; He Should Not Be Extradited to U.S.

NEXTU.N. Rapporteur: Julian Assange Has Faced Psychological Torture; He Should Not Be Extradited to U.S. 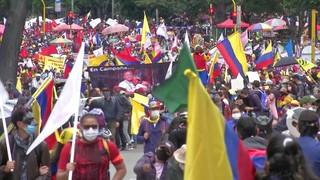