Medicare for All and tuition-free universities have been at the core of the 2020 Democratic presidential campaigns, creating a stark division between progressive candidates and their centrist counterparts. Senators Bernie Sanders and Elizabeth Warren have proposed to make Medicare for All and public universities cost-free by taxing massive corporations and the superwealthy. And earlier this year, Sanders introduced legislation that would cancel student loan debt. His plan would be paid for with a new tax on Wall Street, he says. It would also make public universities and community colleges free — a key pillar of Sanders’s 2020 education platform. These proposals are not radical ideas in Sweden, a country that has built one of the world’s most extensive social welfare systems. In Sweden, healthcare costs are largely subsidized by the state. Daycare and preschool programs are mostly free. College and university are free. Public transportation is subsidized for many users. To explain how Sweden does it, we speak with Mikael Törnwall, Swedish author and journalist focusing on economic issues at Svenska Dagbladet, a Stockholm daily newspaper. His most recent book is titled “Who Should Pay for Welfare?”

StoryAug 13, 2021“Not Going Quietly”: Paralyzed with ALS, Ady Barkan Continues Fighting for Medicare for All

As Democratic presidential candidates debate Medicare for All and making public higher education free, we turn now to look at how Sweden has built one of the world’s most extensive social welfare systems. Here in Sweden, healthcare costs are largely subsidized by the state. Daycare and preschool programs are mostly free. Higher education is free. Public transportation is subsidized for many users.

To look at how Sweden does it, we’re joined by Mikael Törnwall. He’s a Swedish author and journalist focusing on economic issues at Svenska Dagbladet, a Stockholm daily. His most recent book is titled Who Should Pay for Welfare?

AMY GOODMAN: It’s great to have you with us. So, we just have a few minutes here to explain a lot of issues that I think are very misunderstood in the United States. You’ve lived in the U.S. You live here in Sweden. Talk about Medicare for All. Talk about your healthcare system. How is it paid for?

MIKAEL TÖRNWALL: So, it’s almost entirely paid for by taxes. And I know that scares a lot of you guys, but the things we pay, for me at least, I pay almost equivalent in healthcare taxes than you would pay via your employer for health insurance. But what I also get by that is that I don’t have any copayments to talk about. The maximum copayment for healthcare in Sweden is a few hundred dollars a year.

AMY GOODMAN: Explain your own personal situation. What happened with your daughter?

MIKAEL TÖRNWALL: Yeah, that happened a few years ago. It was before we moved to the U.S. She got ill, and she had a brain tumor, fortunately not a deadly one. She got operated on by one of the best surgeons in Europe.

AMY GOODMAN: How old was she?

MIKAEL TÖRNWALL: She was 12. She got excellent care afterwards. We stayed as a family at the hospital with her for a week. And she then had follow-up care for several years. She had to go to a doctor every few months. And we paid nothing for that.

MIKAEL TÖRNWALL: Because she’s a child until 18. You don’t pay anything for healthcare.

AMY GOODMAN: So then you come to the United States, and you’re shocked.

MIKAEL TÖRNWALL: Yeah. And what happened there was she needed — for some reason, she needed to go to a hospital in an ambulance. And they asked, “What healthcare company do you have?” And since we are from Sweden, we had a very small one that wasn’t covered, and I had to pay with a credit card to get her to the hospital.

AMY GOODMAN: So, you’re watching the presidential debates. Every corporate network journalist who hosts one of these debates, they usually ask a question about healthcare, and they say, “Are you going to raise taxes?” Talk about how the Swedish people feel about this, because you’re talking about an issue that unites people across the political spectrum in Sweden.

MIKAEL TÖRNWALL: Yeah. Nobody, not even the most conservative parties, would like to get rid of this system. And I think there are two reasons for that. One is that — or two misconceptions, also, in the U.S. One is that it costs us a lot of money in terms of taxes. Yes, it does. We pay way higher taxes in Sweden than in the U.S. But we are way lower expenses for copayments for healthcare, health insurance, daycare, saving for children’s college and so on. We don’t need to bother about that. So, the higher taxes, for most people, is more than offset by lower costs for other stuff.

AMY GOODMAN: So you say this makes Sweden far more competitive, while the U.S. says, “No, this is much too expensive.”

AMY GOODMAN: You say it’s too expensive not to do this.

MIKAEL TÖRNWALL: I would say at least it would make a country more competitive to make sure that everybody who is smart enough has access to the best education, and everybody who needs healthcare gets that, because then they will be able to be part of the workforce instead of worrying about health. And you, as everybody else in the West, need to compete with better and better companies in China, in India, and the best way to do that is not with an unhealthy, undereducated population.

AMY GOODMAN: Well, talk about school. You have Bernie Sanders and some others talking about free college.

MIKAEL TÖRNWALL: Yeah, we have free college. We don’t pay any tuition for any university in Sweden. Even the best ones that could compete on a global level, you can’t have any tuition, which means that everybody who has the grades to join these universities can do it. And they obviously then take jobs in our global companies and helps them compete on a global scale.

AMY GOODMAN: And talk about overall welfare, the issue, and what you think are the greatest misconceptions about Sweden.

MIKAEL TÖRNWALL: Well, sometimes they describe Sweden as a paradise, that everything works perfectly in Sweden. It doesn’t. You need to understand that everything doesn’t work perfectly. But there is a difference. You don’t need to worry too much about money. Everybody can send their kids to daycare because it’s affordable. Nobody needs to worry — “Will I go bankrupt if I get sick?” — because healthcare is almost free. And if you’re smart enough and study hard enough in high school, you will be able to go to university.

AMY GOODMAN: And how do you answer questions here like, “Why should rich kids go to school for free?”

MIKAEL TÖRNWALL: That is a debate that is not easy. Some people would say that: Why should they? But we decided, I guess, basically, it’s the only way to make it simple. Everybody has access to the basic part of welfare, as we see it, rather than checking your income, because that opens up all kinds of cheating.

AMY GOODMAN: Well, I want to thank you so much for joining us.

And that does it for our show. If you want to see our three days of coverage from here in Stockholm, Sweden, go to democracynow.org. Special thanks to Stockholm’s Open Channel, Stockholm’s only independent, grassroots, non-commercial TV station committed to free speech. The Öppna Kanalen carries Democracy Now! four times per day.

And we want to thank our crew here, Lars Erik Nyman, who is the chair of the Open Channel, Larry Berger, Peter Carlsson, Mia Högfeldt, Kent Wirstam and Jacob Bjelfvenstam. Special thanks to our Democracy Now! team here in Stockholm: John Hamilton, Denis Moynihan, Charina Nadura, Libby Rainey, Nermeen Shaikh, and back in New York, the whole team, including Robby Karran and Hany Massoud.

Tune in Friday as we begin our live coverage from Madrid, Spain, for the U.N. climate summit. We’ll be there for the next week. Tune in to democracynow.org. Democracynow.org is here because of all of you. We thank you so much. I’m Amy Goodman. Thanks so much for joining us, from Stockholm, Sweden. 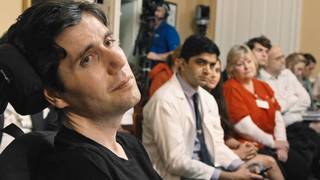