Tensions are escalating between the nuclear-armed rivals India and Pakistan. Pakistan claims it has shot down two Indian military jets and captured a pair of Indian jet pilots, and India claims it has foiled an attempt by Pakistan to bomb military installations inside India. This comes a day after India carried out airstrikes inside Pakistan for the first time since 1971. India claimed it was targeting a camp of the militant separatist group Jaish-e-Mohammed, which claimed responsibility for a recent attack in the Indian-administered region of Kashmir that killed more than 40 Indian soldiers. India accused Pakistan of being directly involved in plotting the bombing. Pakistan denied the claim. Meanwhile, there are reports that Pakistani and Indian ground forces have exchanged gunfire in more than a dozen locations. We speak with physicist, nuclear expert and disarmament activist Zia Mian. He is co-director of the Program on Science and Global Security at the Woodrow Wilson School of Public and International Affairs, Princeton University. He is the co-author of “Unmaking the Bomb: A Fissile Material Approach to Nuclear Disarmament and Nonproliferation.”

StoryApr 16, 2020Pandemic Is a Portal: Arundhati Roy on COVID-19 in India, Imagining Another World & Fighting for It

JUAN GONZÁLEZ: Tension is continuing to escalate between the nuclear-armed rivals India and Pakistan. Pakistan is claiming it has shot down two Indian military jets and captured a pair of Indian jet pilots. Meanwhile, India says it has foiled an attempt by Pakistan to bomb military installations inside of India. This comes a day after India carried out airstrikes inside Pakistan for the first time since 1971. India alleges it was targeting a camp of the militant separatist group Jaish-e-Mohammed, which claimed responsibility for a recent attack in the Indian-administered region of Kashmir that killed more than 40 Indian soldiers. India accused Pakistan of being directly involved in plotting the February 14th bombing; Pakistan, however, denies the claim.

AMY GOODMAN: Meanwhile, there are reports that Pakistani and Indian ground forces have exchanged gunfire in more than a dozen locations. India has also reportedly conducted four ground raids on Kashmiri separatist leaders. Earlier today, Pakistan announced it was shutting down its airspace and grounding all civilian planes. Pakistani Army spokesman Asif Ghafoor announced the news.

ASIF GHAFOOR: [translated] The airspace is shut due to the current situation. I would say that Pakistan’s response is not a retaliation, but it is a demonstration of our capability, capacity and will, staying within the domain of responsibility, as a state which has the potential. We do not want to escalate the situation.

PRIME MINISTER NARENDRA MODI: [translated] I want to assure you, our country is in safe hands. I will not let the country bow. I take an oath upon the soil that I won’t let this country be erased.

JUAN GONZÁLEZ: The United States, Russia, China and the European Union have urged the nuclear rivals to show restraint. India and Pakistan are believed to have around a hundred nuclear warheads, and have fought three wars since 1947. The Bulletin of Atomic Scientists has warned, quote, that “computer models have predicted that the physical impacts of a nuclear exchange between India and Pakistan, or even a single strike on a large city, would be devastating.”

AMY GOODMAN: We’re joined right now by Zia Mian, a Pakistani-born physicist, nuclear expert and disarmament activist. He’s co-director of the Program on Science and Global Security at the Woodrow Wilson School of Public and International Affairs at Princeton University. Professor Mian is co-author of Unmaking the Bomb: A Fissile Material Approach to Nuclear Disarmament and Nonproliferation.

Professor Zia Mian, welcome to Democracy Now! Can you respond to this latest escalation? While there is this split screen between Michael Cohen and North Korea, the summit in Vietnam, you have this very serious escalation between two nuclear powers, India and Pakistan.

ZIA MIAN: Well, the escalation in fighting between India and Pakistan is a grave source of concern for people all over the world, but it’s part of a larger and ongoing crisis that surges into the news every so often. And so, for many people, including those in the United States, this is something that they’ve seen before, and so they don’t expect it necessarily to escalate into an all-out war with the kind of catastrophic implications that we expect war between nuclear-armed states to have.

JUAN GONZÁLEZ: Professor Mian, could you talk about the February 14th attack that occurred inside of Indian-administered Kashmir and the supposed reason by the group known as JEM that claimed responsibility?

ZIA MIAN: Jaish-e-Mohammed, which is translated as the Army of Muhammad, the prophet of Islam, goes back to 2000. It’s a radical Sunni militant group that has been fighting, with support from the Pakistani Army and its intelligence service, ISI, against India in Kashmir ever since then and has launched many, many attacks into Indian Kashmir and even into India proper. So this is just the most recent of a long line of attacks by Jaish-e-Mohammed.

But the larger issue, I think, is not this one particular attack and how Narendra Modi’s Hindu nationalist government in Delhi has tried to respond to it to show that it’s strong, because they’re having an election in India, and so the prime minister and his party wants to prove how strong and tough they are. The real issue that we need to talk about is the fact that this level of violence between India and Pakistan has continued for a very, very long time and that it’s not so much the military-on-military violence, but the fact that large numbers of civilians along the Line of Control, that divide Indian Kashmir and Pakistani Kashmir, are caught in this endless barrage of artillery and firing across there, which claims civilian casualties on a regular basis, and also the fact that no one seems interested in thinking about what the future of this conflict and these people trapped in Kashmir between these two states determined to resolve their issues by force—I mean, what’s the future going to be like for these people?

ZIA MIAN: The United Nations basically stopped talking about Kashmir and trying to find actively any kind of solution a very long time ago, because it became clear that neither the Indians nor the Pakistanis were willing to respect what the Kashmiris might actually want. And both of them have resisted any solution that doesn’t give them what they want. And so, the international community has basically thrown its hands up and walked away from the issue.

What we need to focus on now is, A, to return to a ceasefire situation. So, in 2003, India and Pakistan agreed a ceasefire along the Line of Control in Kashmir because of the level of violence and the threat of war. And so, the first thing to do is to restore the ceasefire. Both sides need to step back, stop the shelling, and park their airplanes on the ground and stop the movement of tanks and troops that are now being reported along their international border. What we have to do is to make sure this doesn’t escalate any further and no civilians continue to be harmed by the level of violence that we see on an increasing basis with each passing hour. And it’s only in a situation where the fighting stops that we can begin to think about how do we take this forward.

AMY GOODMAN: Zia, I also wanted to go back to that issue of these two nuclear-armed countries both refusing to renounce first strike. What does that mean?

ZIA MIAN: Well, India and Pakistan are just like all the other nuclear weapon states. They believe that what they do with their nuclear weapons and how they threaten each other, and potentially the rest of the world, is a matter only for them to decide. In that way, they’re no different from the United States and Russia, Britain, France, China, Israel or North Korea. They think that they are above international opinion, that they are above international law and that they can threaten to use nuclear weapons with impunity. And we’ve seen, just in the last few days, that they, both the leaders of India and Pakistan, have made veiled nuclear weapon threats. But this is no different from what Vladimir Putin and Donald Trump do. And this is just part of how nuclear weapon states parade themselves on the international stage. And it’s only when the rest of the world decides that the real issue is the issue of states having nuclear weapons and threatening catastrophic mass violence, that this has to stop.

JUAN GONZÁLEZ: Well, Professor, I wanted to ask you, in terms of this whole issue of Pakistan being a sponsor of Jaish-e-Mohammed—you’ve raised the issue in the past of all these proxy groups that Pakistan is supporting. Iran has claimed involvement by Pakistan in terrorism over there, and as well as Afghanistan. Could you talk about this proxy movement that Pakistan has continued to support, which has sown so much instability in the region?

ZIA MIAN: Pakistan has a history, going back to its founding in 1947, of using proxy fighters as a way to increase its capacity to wage war against its neighbors, when it’s felt that it has to do that. So, it’s used proxies in Kashmir against India. There are militant groups based in Pakistan that have attacked Iran. There was an attack just last week on a bus of Iranian Revolutionary Guard troops that killed about 20 Iranians, and the Iranians have said that Pakistanis were involved in that attack. And as we know, ever since 9/11, there have been militant groups based in Pakistan who come across the border into Afghanistan and carry out terrorism there.

And so, this is a long-established practice in Pakistan, that it means that they can use force and not be held directly accountable, because it’s not their soldiers fighting in most cases. But this is par for the course. When you have armies in charge of countries, which is what is the case in Pakistan for most of its history, then they look for ways in which they can use military thinking, military strategy, to carry out foreign policy, rather than diplomacy. And what we have in Pakistan is a militarized state that uses violence as a normal tool of statecraft.

AMY GOODMAN: Zia Mian, we’re going to break and then ask you about what’s happening in Iran and also the North Korea summit. Zia Mian is a physicist, nuclear expert, disarmament activist, a professor at Princeton University. Stay with us. 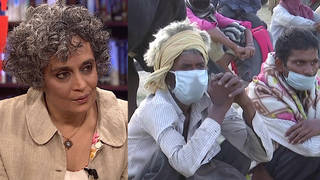 Pandemic Is a Portal: Arundhati Roy on COVID-19 in India, Imagining Another World & Fighting for It