Iranian President Hassan Rouhani is reportedly refusing to accept the resignation of his foreign minister, Mohammad Javad Zarif, who quit suddenly in a surprise move announced via Instagram Monday. Zarif played a central role in the negotiations leading to the 2015 Iran nuclear deal. Last year, President Trump withdrew from the landmark deal despite international condemnation of the move and U.N. inspectors saying Iran was adhering to the agreement. Zarif did not offer any reason for his resignation, simply writing, “I sincerely apologize for the inability to continue serving and for all the shortcomings during my service.” We speak with Medea Benjamin, co-founder of CodePink and author of several books, including “Inside Iran: The Real History and Politics of the Islamic Republic of Iran.” She met with Zarif in Tehran just hours before he announced his resignation. We also speak with physicist, nuclear expert and disarmament activist Zia Mian. He is co-director of the Program on Science and Global Security at the Woodrow Wilson School of Public and International Affairs, Princeton University.

JUAN GONZÁLEZ: We turn now to Iran, where President Hassan Rouhani has reportedly refused to accept the resignation of his foreign minister, Mohammad Javad Zarif, who quit suddenly in a surprise move announced via Instagram Monday. Zarif played a central role in the negotiations leading to the 2015 Iran nuclear deal. Last year, President Trump withdrew from the landmark deal, despite international condemnation of the move and United Nations inspectors saying Iran was adhering to the deal. Zarif did not offer any reasons for his resignation, simply writing, quote, “I sincerely apologize for the inability to continue serving and for all the shortcomings during my service.”

AMY GOODMAN: Foreign Minister Zarif met with a CodePink delegation in Tehran, Iran, just hours before he announced his resignation. We turn right now to Medea Benjamin, who was in Tehran, met with the foreign minister.

And if you can talk about what he said, Medea, and why you’re in Iran right now, what the foreign minister said to your delegation?

MEDEA BENJAMIN: It was quite amazing to have a chance to speak for an hour and a half to the foreign minister and have him tell us, really, a series of histories of negotiations or deals that have been made with the United States over many years and how they have been violated, and how this kind of violations has created a sentiment among many Iranians that you just can’t trust the United States.

Zarif put his reputation on the line in negotiating the Iran nuclear agreement. And he told us that in 2015, when it was signed, there was jubilation in Iran, and about 80 percent of the Iranian people were in favor of the agreement. Since then, with Trump pulling out and the economic conditions worsening because of the reimposition of sanctions, the Iranian people are asking, “What did we get out of this deal?” And the popularity has dropped to 51 percent. He told us he was under tremendous pressure from the conservatives in Iran to pull out of the deal. He wants to keep it going. And he also faulted the Europeans for not really coming to the aid of Iran in trying to save the businesses in Europe from being able to trade with Iran.

JUAN GONZÁLEZ: Medea, could you talk about your people-to-people delegation there in Iran and what you’ve been able to see of the situation in the country, given the U.S. sanctions?

MEDEA BENJAMIN: Well, first, let me say how difficult it was to get here. We have 28 members on the delegation. And we had to wait months and months, first hearing we got the visas, we didn’t get the visas, we got the visas. It’s very difficult. But, of course, what the Iranians say to us is that it’s impossible for them to get to the United States. We met a woman last night who is a twin, and her twin sister is in the U.S., and she can’t go visit her twin sister. So, we are very grateful that we finally did get the visas.

And we have had a series of incredible meetings. We met yesterday with the special adviser on foreign affairs to the head of the parliament here. We went to the parliament. We met with delegates, both women parliamentarians as well as parliamentarians who represent different minority groups, like Assyrians and Armenians. We also had a free-ranging, wonderful meeting with the Iranian students and professors at the University of Tehran.

AMY GOODMAN: And I wanted to bring in Princeton University professor Zia Mian on the significance of Zarif in the negotiations, what happened with President Trump pulling the U.S. out of the nuclear deal, and how that undercut the foreign minister, and what—if, in fact, he does follow through on the resignation, even though the Iranian president has not accepted it, what that could mean.

ZIA MIAN: Well, the history of U.S.-Iranian nuclear diplomacy for the last 20 years has been one where most of the time the two leaderships and the key possible negotiators have been out of step. So, when Zarif and Rouhani and others tried to negotiate in the early 2000s, the George Bush administration said, “No, we don’t want to talk to the Iranians.” When Iran got a hard-line president, and President Obama wanted to negotiate, the Iranians wouldn’t talk. And we had this brief window where you had President Obama and John Kerry on the U.S. side, and you had President Rouhani and Foreign Minister Zarif on the Iranian side, and I think it’s fair to say that if it had not been for that combination, we would not have got a nuclear deal between the United States, the international community and Iran.

But the fact is that with President Trump the agenda has gone back to hostility towards Iran, and the American goal is now regime change. What they don’t want to see is Iran become fully integrated into the international community, which is what Foreign Minister Zarif and President Rouhani have been trying to do for a long time now. And by breaking out of the nuclear deal, by trying to make sure that the deal collapses completely, by putting more sanctions on Iran, by trying to force Iran to violate the deal, the U.S. hope is to create the conditions for regime change. And what this is doing is undermining and potentially destroying the possibility of democratic reform in Iran. And that only then allows the United States to say, “We told you so. These people are incapable of reform and change, therefore we have to use whatever means are necessary to create regime change.” This is all part of a long-standing right-wing agenda in the U.S., led by people like Bolton and Pompeo and others, to try and force regime change in Iran. And unfortunately, the moderates and reformists in Iran, like Zarif, have had to pay the price for this.

AMY GOODMAN: We want to thank you both for being with us. And, Professor Zia Mian, we want to ask you to stay with us, because we’re going to end the show on what’s happening in North Korea, the latest developments on the summit.

dream hampton on Making “Surviving R. Kelly” & the Grassroots Activists That Helped Bring Him Down

NEXTdream hampton on Making “Surviving R. Kelly” & the Grassroots Activists That Helped Bring Him Down 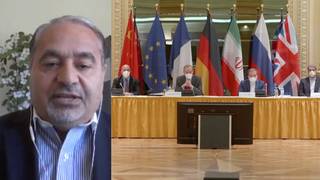