Protesters shut down traffic outside New York City Hall Wednesday, partially blocking access to the Brooklyn Bridge, staging a die-in to demand radical action on climate change and remaining in the streets until the police arrested at least 62 people. The protest was just one of a series of demonstrations being staged around the world this week by Extinction Rebellion, a global movement taking direct action to demand drastic government action to combat the climate crisis. Protesters say the demonstration is just the beginning of a growing resistance movement, and more actions can be expected later this week.

REV. CHELSEA MacMILLAN: I’m Reverend Chelsea MacMillan, and this is Extinction Rebellion. We are joining rebels all over the world, standing up for climate change. We need to declare a climate emergency and take swift action to change the course of human history right now. … We’re about to get arrested. We’ve been blocking this road. And we’re here to show New York City that we’re serious, that we need to do something now and we need to do something fast about climate change.

EXTINCTION REBELLION ACTIVIST 1: How long are we going to let these profit-driven systems drive our extinction? We have less than 12 years!

EXTINCTION REBELLION ACTIVIST 1: There’s an emergency with the climate, and most people don’t know the gravity of the situation, really. Watch climate videos.

NEW YORK CITY POLICE DEPARTMENT: This is the New York City Police Department. You are unlawfully in the roadway and obstructing vehicular traffic. You are ordered to leave the roadway and utilize the available sidewalk.

EVE MOSHER: My name is Eve Mosher, and I’m here with Extinction Rebellion. We’re here to get our New York City and New York state government to recognize that climate change is the most urgent issue of our time and that they need to act accordingly. The science shows that we have to make drastic reductions, and we have to make those reductions now. And so we’re out here asking them to act like—Mayor de Blasio has said it is an emergency, and we want him to act like it’s emergency.

Extinction Rebellion has four demands. In the U.S., we have the demand that the government and the media tell the truth about the urgency of climate change. We are asking for them to act now to maintain the ecosystem and get us to net zero by 2025, which is very aggressive. We’re also asking for citizens’ assemblies. We don’t trust the government to do this on their own; we need oversight from citizens. And in the U.S., we’re asking for a just transition, that we pay attention to the fact that we’ve caused harm to entire communities with our environmental economy—extractive economy. And we want something done about that.

BEN SHEPARD: I’m Ben Shepard of Brooklyn, New York. We’re here to demand that the mayor declare a climate emergency. I’m the father of two girls. I want them to have a future in New York City. But it looks like the city is going to be flooded, underwater, unless the mayor declares emergency. I’m prepared to get arrested so my kids will have a future. The only way change ever happens in this country is if people put their bodies on the line. 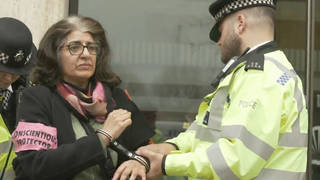