We look at the fight in Congress over disaster aid for Puerto Rico since it was ravaged by Hurricane Maria, one of the deadliest storms in U.S. history. On Monday, two competing disaster relief bills stalled in the Senate. A companion to a January package passed in the House failed after Republicans objected to the lack of relief funding for recent flooding in the Midwest. Another Senate bill supported by Republicans fell short of the 60 votes needed. It contained just $600 million for Puerto Rico’s food stamp program, a number Democrats say is far too low as many Puerto Ricans are still recovering from the devastation of 2017’s Hurricane Maria. Democrats also say aid should cover rebuilding and other forms of disaster relief. Trump responded Monday night on Twitter that “Puerto Rico got far more money than Texas & Florida combined, yet their government can’t do anything right, the place is a mess–nothing works.” We get response from New York Congressmember Nydia Velázquez, who has served in the U.S. House of Representatives since 1993. She is the first Puerto Rican woman to be elected to Congress and is the former the chair of the Congressional Hispanic Caucus.

JUAN GONZÁLEZ: We begin today by looking at the fight in Congress over disaster aid for Puerto Rico since it was ravaged by Hurricanes Maria and Irma in 2017. On Monday, two competing disaster relief bills stalled in the Senate as Democrats and President Trump continue to fight over federal relief funds for Puerto Rico. A companion bill to a January package passed in the House failed after Republicans objected to the lack of relief funding for recent flooding in the Midwest. Another Senate bill, supported by Republicans, fell short of the 60 votes it needed. It contained just $600 million for Puerto Rico’s food stamp program, a number Democrats say is far too low as many Puerto Ricans are still recovering from the devastation of 2017’s Hurricane Maria. Democrats also say aid should cover rebuilding and other forms of disaster relief.

AMY GOODMAN: That was President Trump’s tweet. Well, last week, Trump told a meeting of Republican lawmakers that Puerto Rico had received too much disaster aid. Senator Marco Rubio told reporters Trump said the aid would, quote—”is way out of proportion to what Texas and Florida and others have gotten.” But a study by the Universities of Michigan and Utah found federal aid to Puerto Rico was slower and less generous after Hurricane Maria than federal aid received by Texas and Florida after Hurricanes Harvey and Irma. Hurricane Maria was one of the deadliest storms in U.S. history.

San Juan Mayor Carmen Yulín Cruz tweeted Monday, “Pres Trump continues to embarrass himself & the Office he holds. He can huff & puff all he wants but he cannot escape the death of 3,000 on his watch. SHAME ON YOU!” the San Juan mayor tweeted.

Well, for more, we go to Washington, D.C., to speak with Congressmember Nydia Velázquez, Democrat of New York, who has served in the U.S. House of Representatives since 1993. She’s the first Puerto Rican woman to be elected to Congress, the former chair of the Congressional Hispanic Caucus.

Congressmember Velázquez, welcome back to Democracy Now! Thanks so much for joining us. Can you respond to President Trump’s repeated attacks on Puerto Rico, demanding that aid be cut?

REP. NYDIA VELÁZQUEZ: Good morning, and thank you, Amy and Juan, for having me.

Well, the president again is trying to masquerade his ineffective response to Puerto Rico and again lie about the money that Puerto Rico has been receiving. And that is true. Puerto Rico has only—I believe that it has been close to $40 billion that has been obligated, but only two weeks up to maybe a month ago, Puerto Rico wasn’t able to get the money that was appropriated. I believe that only close to $11 billion has been—has made its way to Puerto Rico. So, the $90 billion that the president made reference to is the estimate that has been put together by insurance companies and the government of Puerto Rico about the damages that Puerto Rico suffered through Maria and Hurricane Irma. So, again, he doesn’t have the facts right, and he comes to Congress. It’s just alarming for the president of the United States to come to the Senate and target a system to the most vulnerable American citizens in Puerto Rico. It is shameful. And he cannot get away with this.

I blame the Republican leadership. I blame Rick Scott, the senator from Florida, and Marco Rubio for not standing up for the American citizens in Puerto Rico. They said that they will be the senators representing the interests of Puerto Rico. They lack the spine to stand up to the president of the United States and call out his lies.

JUAN GONZÁLEZ: Well, Congresswoman, I wanted to ask you further about the aid. The Washington Post last year had reported that Florida received more money in disaster relief for its citrus industry, $2.3 billion, than Puerto Rico received initially to rebuild its entire electrical grid. Puerto Rico got about $2 billion in that initial package. And now, the oranges, obviously, of Florida are important to the United States, but they are not critical to life, whereas the electrical grid of Puerto Rico obviously is critical to the functioning of the entire society. I’m wondering, this disparity, even of comparing the aid to, for instance, Texas and Florida, when the death toll in Puerto Rico could only be compared to Hurricane Katrina—that’s the only disaster of this magnitude—and yet Trump continues to sort of equate it with what was given to Texas and Florida after Hurricane Harvey. I’m wondering your concern about what’s happening with the rebuilding of the electrical grid in Puerto Rico?

REP. NYDIA VELÁZQUEZ: Well, when we talk about almost 3,000 lives that were—that die, that were lost during Hurricane Irma, many of them happened in the aftermath of Maria because of the lack of power in Puerto Rico. So, in order to rebuild the economy, in order to make sure that people’s lives are protected, we need to restore the power grid. And so, for the president to compare oranges to the lives of Puerto Rico shows you that he doesn’t value the lives of the people in Puerto Rico. For him, brown people are not deserving of our commitment of the federal government to show up and assist and provide the resources.

JIM ACOSTA: Does it feel that way sometimes? Are you dealing with a bully?

GOV. RICARDO ROSSELLÓ: If the bully gets close, I’ll punch the bully in the mouth.

AMY GOODMAN: “I’ll punch the bully in the mouth,” Rosselló said. In response, Trump told reporters, “I’ve taken better care of Puerto Rico than anyone ever.” President Trump has still not acknowledged that more than 3,000 people died in Puerto Rico after the hurricane. Is that right, Congressmember Velázquez, that he has not admitted this latest—the latest figures, which could be actually more than 4,000?

REP. NYDIA VELÁZQUEZ: That is more troubling, is the fact that he instructed Mick Mulvaney and Secretary Carson—and this is information that was provided to The Washington Post by a deputy assistant—that the president wanted to make it difficult for any single dollar to go to Puerto Rico, that instead it should go to Texas. Again, this president is cruel, when he doesn’t recognize that, under our watch, 3,000 lives were lost. But that is not enough, and he continues to be a bully, and he continues to lie. It’s just shameful. It’s cruel. It’s heartless. He has no empathy for children who could die because we, the richest country in the world, is incapable of doing what is right for American citizens in Puerto Rico.

REP. NYDIA VELÁZQUEZ: Well, as you know, Juan, yes, I voted reluctantly. We didn’t have a legal framework. Puerto Rico didn’t have the right to file for bankruptcy. And we were concerned that lacking that, that Puerto Rico will end up in federal court, that a judge will move to seize public assets or sell public assets in order to honor the good faith that they put into, for example, the GOs. But in that legislation also, we added language that will require for the oversight board to conduct an audit. And they waited too long to do it, and it shows that $6 billion were issued illegally. Now, we sent a letter yesterday requesting that on top of that, that they will add up the fees and commissions that were paid at the time that they issued those bonds, and that that should be also declared illegal.

I am not happy about the fact that the oversight board has focused more on paying creditors rather than promoting economic development and that many of the measures have been austerity measures. And so, they need to do a better job. They still have time to right the wrongs of some of the decisions that they have made, and we will continue to put pressure. But my take is, they should discharge the debt and cancel the debt at this point.

“The System Is Rigged”: Democrats Drop Corporate and PAC Money Amid Pressure from Progressives 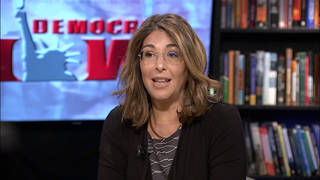