U.S. agribusiness giant Monsanto has been ordered to pay its highest damages yet in a massive lawsuit over the popular weed killer Roundup. A jury ordered Monsanto to pay more than $2 billion in punitive damages to Alva and Alberta Pilliod, a couple who were both diagnosed with non-Hodgkin’s lymphoma cancer after using Roundup on their properties for decades. Monsanto is owned by German pharmaceutical giant Bayer. The main ingredient in the weed killer Roundup, glyphosate, is said to cause the cancer. Attorneys estimate that there are thousands of similar cases against Roundup pending in courts around the country. Last year, a jury in California ordered Monsanto to pay $289 million in damages to a school groundskeeper who developed cancer after regularly using Roundup. The 46-year-old man, Dewayne Johnson, also has non-Hodgkin’s lymphoma. The EPA says that glyphosate is not carcinogenic, but other scientific studies and the World Health Organization have found that human exposure can in fact lead to cancer. We speak with attorney Brent Wisner, co-lead trial counsel for Alva and Alberta Pilliod.

NERMEEN SHAIKH: We turn now to the stunning verdict in the case against U.S. agribusiness giant Monsanto, which has been ordered to pay its highest damages yet in the third lawsuit over the popular weed killer Roundup. A jury has ordered Monsanto, which is owned by German pharmaceutical giant Bayer, to pay more than $2 billion in punitive damages to Alva and Alberta Pilliod, a couple who were both diagnosed with non-Hodgkin’s lymphoma cancer after using Roundup on their properties for over 30 years. The main ingredient in the herbicide is glyphosate and is said to cause the cancer. This is plaintiff Alberta Pilliod.

ALBERTA PILLIOD: We’ve been fighting cancer for nine years now, Al longer than me. And it was caused by Roundup. It’s changed our lives forever. We can’t do the things that we used to be able to do. And we really resent Monsanto for that fact. … We wish that Monsanto had warned us ahead of time about the dangers of using Monsanto and that there was something on the front of their label that said “Danger: may cause cancer.” At that point, we could have used Roundup, but we wouldn’t have used it. But I’m sure a lot of other people would choose to. And they weren’t giving us any choice, because, from their ads, we felt that it was incredibly safe to use.

AMY GOODMAN: Attorneys for the plaintiffs estimate there are tens of thousands of similar cases against Roundup pending in courts around the country. Last year, a jury in California ordered Monsanto to pay $289 million in damages to a school groundskeeper who developed cancer after regularly using the weed killer Roundup. The 46-year-old man, Dewayne Johnson, also has non-Hodgkin’s lymphoma. Doctors say he’s unlikely to live past 2020. Earlier this month, the EPA said glyphosate is not carcinogenic. However, other scientific studies and the World Health Organization have found human exposure can in fact lead to cancer.

Welcome back to Democracy Now! Can you start off by responding to this record verdict, Brent—$2 billion—and what this says about Monsanto?

BRENT WISNER: Well, you know, we’ve been litigating this case for over three years now. And this obviously is the third trial that has gotten to a jury. And we presented all the evidence, and we’ve been growing—we have a growing mountain of evidence that we’ve been accumulating as part of this litigation. And I think we finally had a chance to show it all and show the jury that Monsanto has engaged in essentially corporate malfeasance for the last 45 years. And in so doing, I think the jury’s punitive damage award speaks volumes about what the evidence shows. I mean, a lot of people talk about how Monsanto, you know, the EPA says it’s safe or whatnot, but the simple fact is, when you look at the evidence, it’s overwhelming, and juries are resoundingly saying “Stop it.”

NERMEEN SHAIKH: Well, I’d like to go to a statement from Bayer, quote: “Bayer is disappointed with the jury’s decision and will appeal the verdict in this case, which conflicts directly with the U.S. Environmental Protection Agency’s interim registration review decision released just last month, the consensus among leading health regulators worldwide that glyphosate-based products can be used safely and that glyphosate is not carcinogenic, and the 40 years of extensive scientific research on which their favorable conclusions are based.” Brent Wisner, your response to what Bayer has said?

BRENT WISNER: Well, it’s is the same response that they—it’s the same thing they said to the jury. It’s the same thing they’ve been saying for the last three years. And it’s just simply nonsense. The simple fact is that the EPA has got it wrong on glyphosate. We have study after study after study showing that it in fact does cause a specific type of cancer called lymphoma. And we see it happening in thousands of thousands of people across the country.

You know, currently, this administration and this EPA will not take action against Monsanto. We’ve seen the internal documents, the text messages, the emails between senior EPA officials and Monsanto employees. And the simple fact is, is they know that this EPA will not take adverse action against them. It is a travesty that this truth about it causing cancer and this awareness that we’re trying to raise has to be done in the context of litigation. We only exist—these lawsuits only exist because the EPA has failed the American public for 45 years, and Monsanto is allowed to get away with reckless conduct with essentially impunity.

AMY GOODMAN: During the trial, numerous internal Monsanto documents and emails came to light, including the July 2018 email from an analyst from the corporate intelligence firm Hakluyt. The email read, quote, “A domestic policy adviser at the White House said, for instance, 'We have Monsanto's back on pesticides regulation. We are prepared to go toe-to-toe on any disputes they may have with, for example, the EU. Monsanto need not fear any additional regulation from this administration.’” After this email became public, the Center for Biological Diversity asked the Trump administration for public records to assess the pesticide industry’s influence on the EPA’s proposal to reapprove glyphosate. Can you talk more about this, Brent Wisner?

BRENT WISNER: Well, it’s really interesting. In the middle of trial, after we had rested our case-in-chief but before closing arguments, out of nowhere, the EPA issues an interim analysis. It was written by an individual, Billy Mitchell, who doesn’t have any higher or specialized education or training. And if you read the document, it literally reads like the opening statement from Monsanto during our trial. It was Monsanto wants a report, EPA brings it. And that just shows you just that the level of capture of this agency, that essentially does not work for the American public but works for industry—these documents from these corporate intelligence agencies, they just show us just how deep it runs. And it’s not just, you know, a political thing, but it’s actually in the staffers themselves. The fact that the White House is telling Monsanto, “We have your back,” I mean, it just tells us that we’re going to have to keep fighting this fight and that we are not going to get any support or help from the public agencies that, ironically, are supposed to be protecting the public health.

AMY GOODMAN: Very quickly, Dewayne Lee Johnson, you also represented him, the school’s groundskeeper who won $289 million in damages. The Pilliods won $2 billion. But actually, what happens in these settlements? How do you arrive at these numbers? And do they actually get this? And what does it do to Monsanto?

BRENT WISNER: Well, whether or not Mr. Johnson will see the entire award, it’s an issue that is currently being fought in courts, and it’s on appeal. The Pilliods’, obviously, award was substantially bigger, and that’s a product of the fact that Mr. Johnson’s case was actually rushed to trial because of his failing health, whereas the Pilliod case, we had had time to develop the full body of evidence. So that’s one of the reasons why the number is so big.

But I think when you look at the overall situation, what these numbers say is a clear signal to Monsanto and now Bayer that they need to do something. And the simple fact is, currently, the leadership at Bayer is refusing to take responsibility for this health crisis that Monsanto created, and they’re refusing to do right by these people. And we are going to continue to file these lawsuits, take them to trial and get bigger and bigger verdicts, until they finally do right by these people.

BRENT WISNER: Well over 13,000, and those are filed lawsuits. That’s not counting the probably 20,000 or 30,000 other lawsuits that are yet to be filed. I mean, this is a health crisis that we have, and Bayer needs to sit down with these lawyers and sit down with these victims and find a way through this. But right now they’re choosing to fight. And if they want to fight, we’ll see them in court.

AMY GOODMAN: And what happens to Roundup? We have 20 seconds.

BRENT WISNER: You know, hopefully, we get a warning. We want people to know and have a choice when they use the product. Hey, does it cause cancer? They have a right to know.

AMY GOODMAN: Should it be removed from the market?

BRENT WISNER: That’s a difficult question. You know, people still smoke cigarettes. We know they cause cancer. At the end of the day, this is America. People have a right to make a choice. Whether it gets removed or not, that’s a different question. They deserve at least to know that it causes cancer.

AMY GOODMAN: Brent Wisner, we want to thank you for being with us, attorney and the co-lead trial counsel for Alva and Alberta Pilliod in a lawsuit against Monsanto. The Pilliods both developed cancer after using Roundup weed killer on property for decades. A California jury has just ordered Monsanto to pay the couple more than $2 billion in damages.

The World Just Took a Major Step to Curb Plastic Pollution, But the U.S. Refused to Join Effort 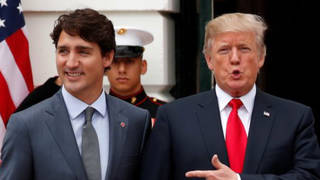