The Oregon state Legislature has been in a standoff for nearly one week, after 11 Republican lawmakers fled the Capitol Thursday to avoid voting on a landmark climate change bill. Some are believed to be hiding out in Idaho. Right-wing militias supporting the rogue GOP legislators have threatened violence, which led the remaining lawmakers to shut down the state Capitol in Salem. The climate crisis bill aims to decrease emissions by implementing a statewide cap-and-trade model. Without at least two of the rogue Republican senators present, Oregon Democrats, who control the state Senate and House of Representatives, don’t have the necessary quorum to vote on the legislation. We speak with Oregon Democratic state Representative Karin Power. She is co-chair of the state’s Joint Committee on Carbon Reduction and co-sponsor of the cap-and-trade bill.

AMY GOODMAN: This is Democracy Now! I’m Amy Goodman, as we turn to Oregon, where the state government is in a standoff after 11 Republican lawmakers fled the Capitol Thursday to avoid voting on a landmark climate change bill. Some are believed to be hiding out in Idaho. In an unbelievable turn of events, threats of violence from right-wing militias supporting the rogue Republican legislators then led the remaining lawmakers in the Capitol to shut down the state Capitol building in Salem. It’s now been nearly a week since all of Oregon’s Republican senators went into hiding to prevent voting on the bill, which aims to decrease emissions by implementing a statewide cap-and-trade model. Without at least two of the rogue Republican senators present, Oregon Democrats, who control both the state Senate and House of Representatives, don’t have the necessary quorum to vote on the legislation. Oregon Democratic Governor Kate Brown sent out the state police to track down the senators last week, but they have not returned to the Capitol.

This is Oregon Republican Senator Brian Boquist, one of the lawmakers who fled the Capitol, speaking last week before the standoff began.

SEN. BRIAN BOQUIST: Sending the threat out, like, “Oh, we’re going to have special session,” or “I’m going to send the state police to arrest you.” Well, I’m quotable. So here’s the quote. This is what I told the superintendent: Send bachelors and come heavily armed. I’m not going to be a political prisoner in the state of Oregon. It’s just that simple.

For more, we go to Portland, Oregon, where we’re joined by Oregon Democratic state Representative Karin Power. She’s co-chair of the state’s Joint Committee on Carbon Reduction and co-sponsor of the cap-and-trade bill.

Welcome to Democracy Now! What is going on in your state?

AMY GOODMAN: Republican legislators, apparently, some have fled to Idaho, and you’ve got the far-right militias threatening the state Capitol, so it was shut down this weekend?

REP. KARIN POWER: Yes. And our Democratic leadership in both the House and the Senate issued a statement last week condemning any threats of violence towards our state police and comments that would make our state Capitol unsafe. And the Senate Republican leadership has set out to the media that they are not welcoming help from the militia, that their senators are out of state. But they have not condemned it as strongly as I, myself, and I think others, would have liked, but they have distanced themselves from those militia comments, as well.

AMY GOODMAN: But explain what is going on. So, they’re in Idaho. And how did far-right militias threaten the state Capitol?

REP. KARIN POWER: So, earlier in session, the Senate Republicans walked out on their job to halt progress on passing a really significant landmark education funding bill, as well. We have underfunded our schools in Oregon for about 20 years. When they walked out, our governor and the Senate Democratic leadership negotiated two bills, that didn’t move forward this session, in exchange for their return to business for the rest of session. Now they’ve walked out again, less than just a few weeks later.

And I think the clip that you played earlier from Senator Boquist perhaps led to some of these militia groups stepping in to presumably defend our senators, who are now out of state. But I think at least one other senator, late last night, said publicly that any threat of violence towards us as members, towards the public, is unacceptable.

AMY GOODMAN: And explain what this is all over. Talk about the climate change legislation you’re pushing for.

REP. KARIN POWER: Yeah, this is all over our climate bill. We have been working to study carbon pricing for the last, oh, almost a decade. Over the last couple years, we’ve been working intensely on a cap-and-trade bill to align with California, Quebec, formerly Ontario, along a Western Climate Initiative. For the last eight months I’ve been helping to lead a terrific committee of both Republicans and Democrats, as we’ve traveled the state to hear from citizens. It’s coalesced into a final version of the bill that was going to be voted on by the Senate last Thursday, when the Republicans walked out, denying them quorum.

REP. KARIN POWER: We are seeking to regulate the largest carbon and carbon-equivalent polluters in the state, and pricing carbon a little bit, to start with, the way that California has started, but Oregon would be the second state in the nation to price all sectors—our production, our transportation, and in our energy and utilities. It’s been a tremendous amount of work to get us this far. We have a number of groups in all major utilities in support. And it’s really just incredibly disappointing that with the climate crisis before us, we were unable to take this last step and get it to our governor’s desk.

AMY GOODMAN: So, what happens now? Oregon Democrats have tweeted out a “wanted” poster for the missing GOP senators last week. “Wanted: Fugitives from Justice (And Their Jobs). Have you seen these people? If you find them, do not harm them! Oregon needs them back at work.” Five seconds, Karin.

REP. KARIN POWER: Sure. Our session ends June 30th, this Sunday. So, if they don’t come back, all bills will be dead.

AMY GOODMAN: Well, I want to thank you for being with us.

REP. KARIN POWER: We have a continuing budget resolution, I believe, that will—

AMY GOODMAN: We’re going to continue with Part 2 of our discussion, and we’ll post it online at democracynow.org. Karin Power, Democratic state representative. 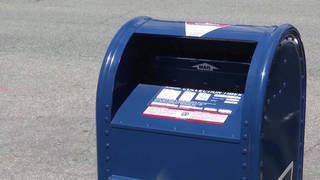