Less than a week after Republican lawmakers in Oregon fled the Capitol to avoid voting on a landmark climate change bill, Senate Democrats said Tuesday that they did not have enough votes to pass the legislation. The news came after right-wing militias threatened violence in support of the rogue GOP legislators, causing a brief shutdown in the state Capitol in Salem. We spoke to Oregon Democratic state Representative Karin Power before the news about the bill broke Tuesday.

AMY GOODMAN: This is Democracy Now!, democracynow.org, The War and Peace Report. I’m Amy Goodman, as we bring you Part 2 of our discussion of what’s going on in Oregon, the state government in a standoff after 11 Republican lawmakers fled the Capitol Thursday to avoid voting on landmark climate change legislation. Some of these legislators are believed to be hiding out in Idaho. In an unbelievable turn of events, threats of violence from right-wing militias supporting the rogue GOP legislators led the remaining lawmakers to shut down the state Capitol in Salem, Oregon.

Oregon Democrats tweeted out a “wanted” poster for the missing senators last week. It reads: “Wanted: Fugitives from Justice (And Their Jobs). Have you seen these people? If you find them, do not harm them! Oregon needs them back at work,” it said.

I want to go to Oregon Senate President Peter Courtney, who, on Friday, read from a letter to Governor Kate Brown requesting help from the Oregon state police to compel Republican lawmakers to return and then beg them to come back.

SENATE PRESIDENT PETER COURTNEY: This is the saddest day of my legislative life. … I beg and beseech my fellow legislators to come to the floor. I need you. The Legislature needs you. The people of Oregon need you. … If you’re mad and you’re angry, upset, take it out on me. Say things about me. Come at me. Don’t do this to people of Oregon. Don’t do this to this branch. You’re too good. You’ve been chosen. I’m begging you to come back. I don’t want to send the state police. Oh, you—I—it’s the—I don’t. I don’t. I have no other choice.

AMY GOODMAN: So, again, that was Oregon state Senate President Peter Courtney, reading from the letter to the Oregon governor, Kate Brown.

Still with us in Portland, Oregon, is the Oregon Democratic state Representative Karin Power, co-chair of the state’s Joint Committee on Carbon Reduction and co-sponsor of the cap-and-trade bill.

So, if you can explain what happens now? You need at least two Republicans to not vote for the bill that you have put forward, but to be present for a quorum. All the Republicans are gone?

AMY GOODMAN: And your session ends on the 30th, this Sunday. What exactly does that mean? This legislation would be dead?

REP. KARIN POWER: This and all other bills that we’ve been working on, at the end of session, are dead. We have a paid family leave program that would be statewide that is ready to go, passed off the House floor. We are working on other big pieces of legislation, referring out to the voters an increase in tobacco taxes to help pay for our healthcare programs—things that people care very deeply about, things over on the Senate side that even our House Republicans care very deeply about. We are hoping they come back to do their jobs before the end of the week.

AMY GOODMAN: So, if you can talk more about your cap-and-trade bill that you’ve put forward, and also address climate activists on the left who have criticized the bill as another, interestingly, handout to industry, saying cap-and-trade programs don’t do enough to move away from dependence on fossil fuels? Your response?

REP. KARIN POWER: That’s the difficulty within energy transition. Our tribes here in Oregon, our farmworker union have worked closely with us to make sure that we’re investing the proceeds in our impacted communities that are going to need it most, people least able to afford climate change, our rural communities and our coastal communities. We don’t have major industry carve-outs, the way that perhaps other legislation has been proposed in the past. And we’ve done our best to craft a strong bill to signal that transition, while still understanding that our lowest-income Oregonians can barely afford their energy bills as is. And so we’ll be crediting them back the gas increased prices and holding their utility bills harmless. We’re doing what we can to signal that this is a climate crisis. We have to act now and soon, but can’t leave people most affected behind.

AMY GOODMAN: Republicans say the bill will have a disastrous effect on jobs and the state’s economy. How do you respond to that?

REP. KARIN POWER: We commissioned an independent economic analysis of the legislation earlier in session and found that it should increase our state’s GDP above and beyond baseline by an additional 2.5% by 2050. And the firm found that they estimate that moving to clean energy and energy independence should create more than another 50,000 jobs over the next couple decades.

AMY GOODMAN: Talk about the right-wing militias. What is their role in all of this? I think this will shock many across the country, that, on the one hand, you had all the Oregon state Republican senators fleeing en masse—apparently a number of them went to Idaho—so that they won’t provide the quorum needed for you all to vote for these climate change bills and others. Where do the militias come into this?

REP. KARIN POWER: The way it looked to me is, the Senate Republicans walked out to prevent the vote on the climate bill, and the militias’ offers of assistance came in after they left. And obviously, it has stirred up for them, nationally, a lot of press, which is deeply disturbing to highlight that segment of any of our states’ population and give them more air time. I’m glad that our Senate Republicans have declined their offers for help.

It is, you know, deeply disturbing to me that that sort of anti-government uprising would happen over a climate bill that we’ve spent months listening from the public. We’ve listened to public testimony for 22 hours. We visited four different cities outside of Salem. And it’s been an incredible public process, unlike most other pieces of legislation we haven’t seen. The idea that we’ve shut out the public is simply untrue and feeds into this narrative that they have to leave, that they have no other choice, when we’ve been working on this literally for years together in earnest.

AMY GOODMAN: And finally, just to explain how Oregon’s system works, you’re a state representative, but it’s the state senators who have fled en masse. How does this bill have to be approved to become law?

REP. KARIN POWER: This bill would need to be voted on by the Senate, approved and then sent to the governor’s desk. Our House continues to do our work. I’ll be heading there later today to continue voting on bills. In the event that the Senate Republicans come back to provide quorums so our government can work again, we want to be ready. But they have effectively ground our government to a halt as they are protesting this vote on a climate bill that’s incredibly important for our state and also for the country.

AMY GOODMAN: Was it already passed in the House?

REP. KARIN POWER: Yeah. After six-and-a-half hours of floor debate last Monday night, it passed our House 36 to 24, on a strong but party-line vote, and was over in the Senate ready to be read and voted on last week.

AMY GOODMAN: Are you afraid there could be violence because of the militias’ threats?

REP. KARIN POWER: That’s part of the reason why our state police opted to close the Capitol this week, to help de-escalate some of the tensions that had arisen after these militia comments were made publicly and online. We were back at work yesterday, and I felt entirely safe in the building. There’s a big difference between regular people coming to protest policies, who disagree with you, and these sort of fringe elements. And I just am very grateful for our state police to help manage the situation for everybody’s public safety there. It is our people’s Capitol.

For those who want to see Part 1 of this discussion, go to democracynow.org. I’m Amy Goodman. Thanks so much for joining us. 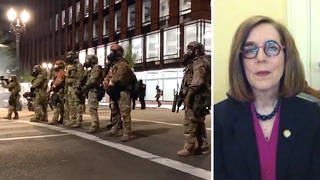