Immigration jails along the southern border are facing heightened scrutiny following horrific reports of dirty and unhygienic conditions at a detention center in Clint, Texas, and other facilities. We speak with government whistleblower Dr. Scott Allen, who was hired in 2014 to inspect facilities where immigrant families are incarcerated, who says degrading conditions for jailed migrants date back to Obama’s presidency. He is calling for more government transparency about conditions in immigration facilities, saying, “I think most Americans, if they were confronted with the humanity of what we are doing here, would be outraged and would not tolerate it.” Allen is still on contract with the Department of Homeland Security’s Office of Civil Rights and Civil Liberties. He and fellow whistleblower Dr. Pamela McPherson were recently awarded the 2019 Ridenhour Prize for Truth-Telling and are represented by the non-profit Government Accountability Project.

StoryDec 03, 2021“The Facility”: Meet the Former Prisoner Who Details Fight for His Life Inside ICE Jail During COVID

JUAN GONZÁLEZ: We’re joined now by Dr. Scott Allen, a government whistleblower who was hired in 2014 to inspect family facilities where immigrant families are incarcerated. He’s still on contract with the Department of Homeland Security’s Office of Civil Rights and Civil Liberties. He and Dr. Pamela McPherson were shocked at what they observed during their inspections, and raised concerns internally. Last year they contacted lawmakers to speak out against family separation and family detention, and continue to do so now, after their concerns were ignored by the Trump administration. They were recently awarded the 2019 Ridenhour Prize for Truth-Telling.

Welcome to Democracy Now!, Dr. Allen. Can you tell us what you have found and why you’ve decided to speak out? You are still on contract.

DR. SCOTT ALLEN: That is correct, Amy. And thank you for having me. What Dr. McPherson and I have been advising our government for—really, going back to 2014, but more intensively over the course of the last year, is that a policy that prioritizes confinement of children over care of them is deeply flawed. A lot of the chaos you’re seeing on the border with the detention of children and their families is a predictable outcome of these flawed policies. And we made specific warnings against these practices, really, from the very first days.

We first inspected the very first family detention facility in 2014 in Artesia, New Mexico. That experience was very important in illustrating that it’s very difficult to keep children safe in detention. We found that in spite of mobilizing significant resources and personnel, that the facility struggled to keep children safe, and, in fact, did not have adequate pediatricians or qualified health professionals to identify problems that were occurring right in front of their eyes.

JUAN GONZÁLEZ: And, Doctor, of course, this started under President Obama, the first family detention centers, and have been ramped up now under President Trump. And your sense—these facilities often are in rural, isolated areas, where it’s very hard not only, as you say, to get the proper medical professionals there, but also to have any kind of accountability from the general public or even journalists, as well. Could you talk about the problems you’ve had in being able to get the word out about what’s going on?

DR. SCOTT ALLEN: Well, yeah. There have been problems all the way through with transparency of these facilities. They are run more like secured facilities that you might think would be appropriate for organized crime members or even terrorists, something where there’s a great security threat. These young parents and their very young children do not represent that type of threat. And if indeed we were treating them humanely, we would be very open and transparent about how we do that.

But, in fact, the accountability mechanisms, of which the Office of Civil Rights and Civil Liberties that I work for is a part of, as well as other accountability mechanisms like the Office of the Inspector General or oversight by Congress, we would have to say that they have all failed to keep children safe. And the evidence is now well reported in the news with the unfortunate news of child deaths, that we predicted early on and warned the government were a very likely outcome of these policies, as well as the deteriorating conditions that children are held under, such as the reports we’re getting out of the Clint facility.

AMY GOODMAN: So, when you raised concerns that children would die in Artesia—this was in New Mexico—

DR. SCOTT ALLEN: So, as I said, the Artesia story was a very important one for us, because it sort of illustrated, in very stark terms, the dangers of trying to rapidly stand up facilities that will house young and particularly vulnerable children. Remember, these are children who have often been traumatized already, and the harmful effects of trauma are cumulative over a lifetime. So they’re a very vulnerable population of children. They’re also often in poor physical health. And the idea of congregating children together, when they’re often not vaccinated, is a public health disaster. So, we saw that there were a number of problems in keeping the children safe.

And probably the most poignant examples that we documented is we looked at weights. I pulled the charts of every child there, and I looked at their weights across the course of their stay and was really surprised to see that a significant number of children, who probably entered the facility to some extent malnourished, given their perilous journeys, were not gaining weight in the facility, which is what you’d expect if it were a healthy and nurturing facility, but they were in fact losing weight, which is a really disturbing marker that we did not expect.

And in reviewing these cases, we found the case of one infant, an 18-month-old, who had been suffering from a diarrheal illness and had become quite dehydrated. The mother kept presenting the child to the physicians. The problem was that the physicians were being rotated in on temporary duty assignment from adult facilities. They were physicians who didn’t have a lot of experience in treating children. And they totally missed the fact, over a course of multiple doctor visits, that the child lost a third of its body weight, 10% being sort of the usual panic moment for clinicians to send the child to an emergency room for intravenous hydration. So, when we identified this case, we were able to say to the government it was a miracle this child did not die of a very easy-to-diagnose and very easily treatable and common medical condition, that we told them that they were playing with fire here, that the challenges of keeping vulnerable children safe in these environments were enormous, and that if they continued, and particularly if they expanded, the risk of losing a child, or more than one child, was very high.

JUAN GONZÁLEZ: Dr. Allen, I wanted to ask you about—you filed comments on the Trump administration’s proposed rule changes under the Flores settlement, which currently limits to 20 days the amount of time that a child can be kept in—can be detained, to indefinite detention. Could you talk about your concerns about this indefinite detention, given the kinds of conditions that you’ve already witnessed?

DR. SCOTT ALLEN: Well, yes. It’s a very important point. First let me start by saying that, as physicians, we are keenly aware of decades of literature that show us that the confinement of children in and of itself is harmful to their health, leading to increased risks down the road, lifelong increased risks, of depression, anxiety, post-traumatic stress disorder, and even physical health problems, like heart disease and diabetes. This is well known. That’s a result of confinement itself, the toxic stress of isolation from community. But this is exacerbated when the confinement is indefinite. The additional stress imposed by uncertainty of the future can increase the trauma. All of that harm is known, before you even get to the types of things we’ve just been talking about. If you can’t provide the necessary supports to care for a vulnerable child population, the harms can be exacerbated. This is what really distressed us, is that in addition to the known harmful effects of confinement, we knew that the government would struggle under the best of circumstances to be able to provide adequate resources to keep these children safe. And, in fact, everything that’s followed has confirmed that worry.

AMY GOODMAN: Dr. Allen, are you calling for more whistleblowers?

DR. SCOTT ALLEN: I think accountability and transparency is important. To some extent, I think the reason that a year after my colleague and I made these disclosures about the terrible conditions we had documented, the dangers to children, that it’s a year later—and I appreciate the fact that the public is once again paying attention and expressing outrage, but I think the challenge is that we’re relying on reports, on accounts, but we’re not seeing, as the public, what’s going on inside these facilities. Remember, for those of us who do get to visit these facilities and enter them, we’re looking into the eyes of young mothers. We’re looking into the eyes of young children who are suffering under these policies. And we see the human cost. I think most Americans, if they were confronted with the humanity of what we are doing here, would be outraged and would not tolerate it.

AMY GOODMAN: Scott Allen, we want to thank you for being with us, medical doctor, whistleblower, hired in 2014 to inspect facilities where immigrant families are incarcerated, on contract currently with the Department of Homeland Security’s Office of Civil Rights and Civil Liberties, speaking out today about what he’s seen on the inside. 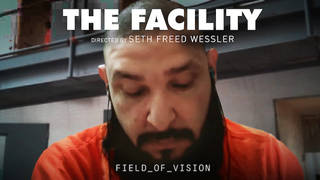 “The Facility”: Meet the Former Prisoner Who Details Fight for His Life Inside ICE Jail During COVID