Juan González: There Are Refugees in Desperate Need of Help in Airports Across the United States

Co-host Juan González was at the Dallas/Fort Worth airport this past Sunday, where he encountered Central American refugee families recently released from detention centers. The families, who were from Guatemala, El Salvador and Honduras, had been left there by Immigration and Customs Enforcement without guidance or a translator to help them navigate their flight information. The families were likely traveling to cities where they could reunite with loved ones already in living in the U.S. In the case of the Guatemalan families, most of them didn’t speak Spanish, but indigenous languages. None of them spoke English. They had no money and received no assistance from American Airlines employees. Several airport staff, mostly maintenance workers and others, said they have been trying to assist the stranded Central American refugees, providing them with food, blankets and other aid. This is a common scene at major airports around the country.

AMY GOODMAN: Well, Juan, it’s great to have you back after your trip to Dallas, but can you explain what happened to you in the airport on Sunday or on Monday, when you tried to return home?

JUAN GONZÁLEZ: Right. Well, this was actually Sunday. On Sunday afternoon, my wife and I were returning from a conference in Dallas. And we were boarding a flight to Newark airport, when the flight had to—after being on the tarmac for an hour and a half, had to come back to the gate. There were a lot of thunderstorms. But then the entire power, apparently, in the traffic control system at DFW airport went down, so all flights, for several hours, that were coming out of the airport had to be brought back to the gate. So there was pandemonium in general at DFW airport.

But right on our flight, we noticed that there were several other passengers who appeared to be Central Americans, obviously couldn’t speak English, didn’t know what was going on. And so we sort of tried to help them try to figure out where to go to try to rebook their flights. It turns out they were all Central American refugees who had just been released from detention centers and were being basically shipped by the federal government to relatives somewhere in other parts of the United States. There was a young Salvadoran woman with a 4-year-old and a 2-year-old son—2-year-old sons. There was a Honduran man with a teenage son. There was a Guatemalan woman with her young son. And in the case of the Guatemalans, they barely—not only didn’t they speak English, they didn’t even speak much Spanish; they were talking basically in indigenous languages to each other.

And so, we tried to help them out, but they were totally lost, bewildered. They had no money. They didn’t know—most of them looked like they had never been in an airplane before, and so they didn’t even know how to figure out who to talk to or what to do. So, we spent several hours trying to help them.

JUAN GONZÁLEZ: No, these were individual employees, maintenance people and others, who have been now for months trying to assist these stranded Central American refugees, trying to provide them food, blankets, whatever they could. They were doing it all on their own time and pulling money out of their own pocket to try to assist these folks. The airlines wanted to ship them to Minneapolis or to Miami or to Greensboro to stay overnight in those areas, to get new flights to go wherever they were trying to head to. And as the employees started telling me this, they said this is happening every single day, and especially in the hub airports, like Denver and Dallas and Chicago. When storms, these summer storms come and there are outages and plane cancellations, these migrants are completely lost. And no one is assisting them. No one is helping them.

So, on top of the problems they have coming up through the border into the United States, then dealing with detention, once they are released, they are now confronting this total chaos in the system, because the government is just sending them on their way with no money and no help. Particularly the young woman with two, a 2-year-old and a 4-year-old, no stroller, all their possessions basically in knapsacks and bags, and to deal with two children, and have come from Central America, and now even in the United States having no help, it’s just astonishing. And, of course, the average air traveler or tourist, just going back and forth, doesn’t even notice what’s going on right in front of our very eyes. This is happening in airports across the country today and has been happening for months. And I just think if anyone who speaks Spanish who’s in one of these airports and sees someone who’s completely lost, any help you can give them, I think, would be appreciated.

AMY GOODMAN: And this is just a reminder. We were there a year ago in Texas. And each airport we were in, including Dallas, we saw a number of children holding those telltale plastic bags. When we would approach, when there was an adult, they would come over and say, “Get away from these children.” They would say we could not talk to them. But the sign is those plastic bags for the kids.

JUAN GONZÁLEZ: Right. It’s just astonishing that this is happening in the United States in 2019.

AMY GOODMAN: Well, we’re going to go to break, and when we come back, we’re going to talk to Clara Long of Human Rights Watch, who was just at the Clint detention center, if you want to call it a jail for children, where children are taking care of children. She’ll describe the filthy conditions there. The news was, yesterday, 300 kids taken away. And now the news is a hundred are being brought back in. Stay with us. 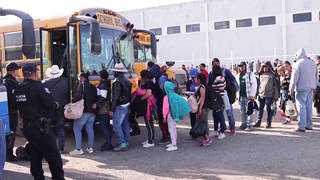