Ryan Grim: Tom Perez Was Elected Head of DNC Thanks to a “Silent Coup” in Puerto Rico in 2017

As Puerto Ricans celebrate the imminent departure of disgraced Governor Ricardo Rosselló, we speak with Intercept reporter Ryan Grim about how Democratic National Committee Chair Tom Perez benefited from what’s been described as a “coup” within the Democratic Party in Puerto Rico. In his recent book, Grim revealed pro-statehood politicians—including some Republicans—quietly took over the Puerto Rico Democrats in 2017 and then offered full support for Perez in exchange for his support for statehood. This helped give Perez enough delegates to beat Keith Ellison in the race to head the DNC.

StoryDec 12, 2017Rep. Gutiérrez on Passing the DREAM Act, Deaths in Puerto Rico & His Aspirations for the Presidency

AMY GOODMAN: But, Ryan Grim, I wanted to end with Puerto Rico. We just see the Puerto Rican governor has announced that he is resigning because of mass protests for almost two weeks. You, though, in your book, first revealed an interesting aspect of what’s taking place in Puerto Rico, fitting it into Democratic politics in the United States, when you said that Tom Perez, head of the DNC, the Democratic National Committee, actually won his position based on a deal he made with Puerto Rican Republicans. Can you explain?

RYAN GRIM: Well, the island’s partisan politics are extraordinarily scrambled, and Republican and Democrat don’t mean the same thing there as they do here. And the parties are more divided along, you know, statehood or not statehood. But they still have the basic apparatuses of party structures, and so they have delegates to the Democratic National Committee.

So then they reached out to Tom Perez and said, “Look, if you come out for statehood at some point, then we’ll give you the entire island’s DNC votes for DNC chair.” He was currently running against Keith Ellison at the time. Ellison later reached out to Luis Gutiérrez and said, “Hey, can you help me, you know, connect me to some people on the island?” Gutiérrez reached out and found out: Whoa, there’s been a coup. All of our people have been tossed off. All of these folks are now with Perez.

The DNC, for very good reasons, had never in the past come out with a position on statehood. And Perez waited about six months after he won the DNC chair race, until he officially came out on behalf of statehood. And it was actually him coming out for statehood that was criticized by a former New York city councilwoman, who was then called a ”puta” in these Telegram text messages by Rosselló. And that was one of the key things that people were objecting to when those text messages came out. So, in a bizarre way, some of it goes back to this strange DNC coup that helped elevate Tom Perez to become DNC chair.

AMY GOODMAN: Well, I want to thank you so much, Ryan Grim, for being with us, Washington, D.C., bureau chief for The Intercept, edited and wrote the introduction to a volume titled The Mueller Papers, also the author of the new book, We’ve Got People: From Jesse Jackson to Alexandria Ocasio-Cortez, the End of Big Money and the Rise of a Movement. You can go to democracynow.org for the interview we did with him when the book came out.

When we come back, we go to London, where thousands took to the streets yesterday to protest the new prime minister, Boris Johnson. We’ll be back in a minute. 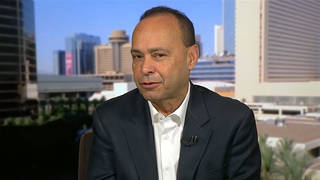 Rep. Gutiérrez on Passing the DREAM Act, Deaths in Puerto Rico & His Aspirations for the Presidency