In ongoing fallout from the Trump administration’s decision to pull out of the Iran nuclear accord, the International Atomic Energy Agency confirmed on Monday that Iran has begun enriching uranium above the level agreed to by the 2015 nuclear deal. Iran has threatened to continue to increase their production of enriched uranium if European signatories of the nuclear deal do not help ease the impact of the U.S. sanctions. We speak with Trita Parsi, executive vice president of the new think tank, the Quincy Institute, and author of “Losing an Enemy: Obama, Iran, and the Triumph of Diplomacy.”

JUAN GONZÁLEZ: Well, fallout from President Trump’s decision to pull out of the Iran nuclear deal continues to grow. On Monday, the International Atomic Energy Agency confirmed Iran has begun enriching uranium above the level agreed to by the 2015 nuclear deal. Iran’s actions come in response to devastating U.S. sanctions, which have been tightened even though Iran had been adhering to the terms of the deal.

AMY GOODMAN: Iran has threatened to continue to increase their production of enriched uranium if European signatories of the nuclear deal do not help ease the impact of the U.S. sanctions. A top French diplomat is heading to Tehran today to discuss the situation, to try to defuse it. Meanwhile, Iran has criticized Britain for recently seizing an Iranian oil tanker last week.

We’re joined by Trita Parsi, executive vice president of the new think tank, the Quincy Institute. His most recent book is titled Losing an Enemy: Obama, Iran, and the Triumph of Diplomacy.

Welcome back to Democracy Now!, Trita. Can you talk about the significance of what’s happening in the wake of President Trump pulling out of the Iran nuclear agreement, this latest French diplomat going to Iran, the oil tanker of Iran being seized, and Iran in continuing to and increasing enriching uranium?

TRITA PARSI: So, this was highly predictable. There was no one who could expect that Donald Trump could walk out of this deal, breach it, violate it, force others to violate it, and then expect that the Iranians would forever live up to it. So, this is not a surprise. If there’s anything that is a surprise, it is that it’s taken the Iranians one year to start taking some of these measures.

Now, it is important to note that these measures are obviously not in any way, shape or form positive. We should not be in this situation in the first place. But they’re also not a massive proliferation risk at this point. These are small steps. They’re easily reversible. And it’s clearly aimed at signaling the Europeans to start living up to the deal rather than just making political statements in favor of it. Whether that will work or not remains to be seen.

It is interesting that the French are going to Tehran. Perhaps the French should actually come and visit Washington, where the actual problem lies, and make sure that they can convince the Trump administration to stop sanctioning countries that are actually adhering to a U.N. Security Council resolution.

JUAN GONZÁLEZ: Well, Trita, some U.S. experts have estimated that Iran’s so-called breakout time, the time required for them to develop enough fissile material for a bomb, is at perhaps two to three months. Could you comment on that estimation?

TRITA PARSI: I’ve not seen any credible estimation that would put it at that. Under the deal, it was quite strict that the Iranians would only be able to have a breakout of a minimum of one year. There’s nothing that has changed in what the Iranians are having. Even them having slightly more LEU than what was permitted under the deal doesn’t change that in such a dramatic way. So, I find that I’m rather skeptical of that analysis, and it seems to smack of the type of threat inflation that the administration is favoring in order to constantly move this issue toward a confrontation.

AMY GOODMAN: And can you talk about the significance of the oil tanker being taken by Britain, apparently at the behest of the United States?

TRITA PARSI: This is an unprecedented move. The legality of it is quite questionable. The former Swedish prime minister tweeted about that just the other day, pointing out that even if there were any sanctions on the European side, Europe does not impose its sanctions in an extraterritorial way. That’s what the United States has been doing for the last two decades. The Europeans do not impose their own laws on other countries outside of their territory.

None of this is in any way, shape or form good, but we have to remind ourselves we’re only in this situation as a result of Donald Trump unresolving a resolved issue. This issue was resolved. Everything was working. The Iranians were adhering to the deal. And we’re only in this crisis situation right now because of the very unfortunate decision of pulling out of the nuclear deal.

JUAN GONZÁLEZ: And the impact on Iran of these sanctions, especially on the banking system of the country?

TRITA PARSI: Well, you can’t sanction the banking system of the country and then expect it not to affect everything else. Everything goes through banking. And as a result, the sanctions that the Trump administration has imposed on Iran, in violation of a U.N. Security Council resolution, is having a devastating effect on the Iranian economy. And as usual, it is the poorest people in the country that pay the highest price, because they’re the ones who cannot protect themselves from these type of pressures and sanctions. According to the Trump administration itself, already 80 to 90% of Iran’s economy is now under some form of American sanction. So, this is clearly as broad-based of a sanctions regime that we’ve ever seen in the history of sanctions, very, very far from the type of targeted sanctions that has been more popular to talk about. This is clearly untargeted and affecting everyone in the country, but primarily the people that are the poorest.

AMY GOODMAN: You have President Trump making history last week walking into North Korea, continuing negotiations with North Korea, even though they shot off missiles and other issues. Many hailed it as a real, very important mark of what diplomacy is all about. Do you feel Trump is not taking the same approach to Iran because North Korea has nuclear weapons, and that that’s the lesson to Iran, that if you get nuclear weapons, you will be dealt with diplomatically, Trita Parsi?

TRITA PARSI: I think it is quite clear that if the Iranians had nuclear weapons at this point, Trump would have been treating them quite differently and would have pursued a very different approach than he is. And this is the real dangerous thing. What the Trump administration is doing, through its conduct on this issue and other issues, it is signaling a lot of countries in the world that we are unpredictable, that we are dangerous, that we are not trustworthy, and that you actually need to find a way to protect yourself from us. And unfortunately, that would mean, for a lot of countries, that they need to have some form of a nuclear deterrence. That is the last conclusion we want other countries to take.

AMY GOODMAN: Trita Parsi, we have to leave it there. We thank you so much. I’m Amy Goodman, with Juan González. 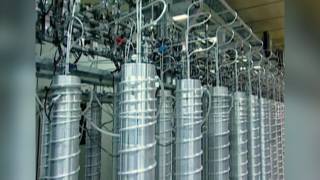