The House of Representatives has formally delivered articles of impeachment against President Donald Trump to the Senate, setting the stage for just the third Senate impeachment trial of a president in U.S. history. The articles were delivered by the impeachment managers who were named earlier in the day by House Speaker Nancy Pelosi.

Speaker Nancy Pelosi: “Make it be very clear that this president will be held accountable, that no one is above the law and that no future president should ever entertain the idea that Article I — I mean, excuse me, Article II — says that he can do whatever he wants.” 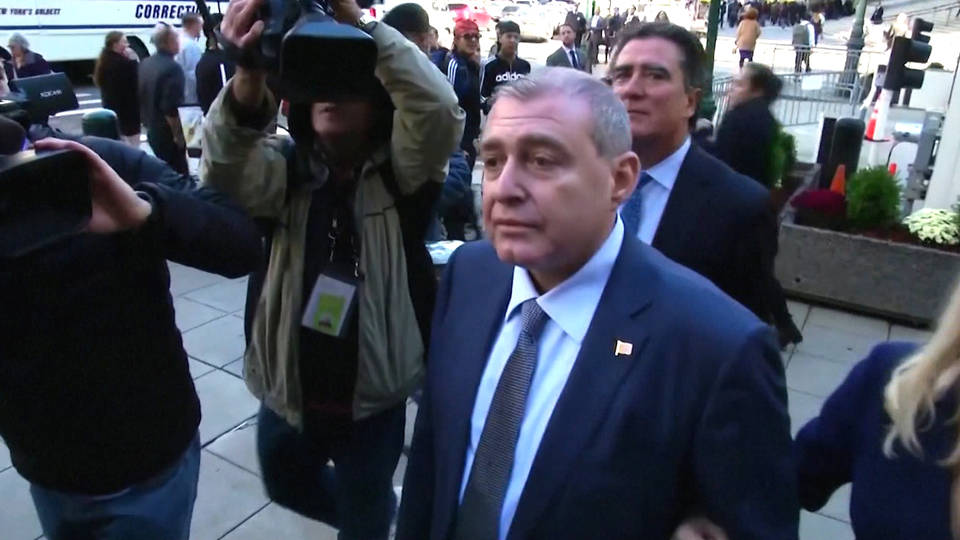 A key figure in the impeachment saga spoke publicly for the first time about his efforts to pressure Ukraine to investigate Trump’s political rival, Joe Biden. Lev Parnas, a Soviet-born businessman and former associate of Trump’s lawyer, Rudy Giuliani, said in interviews with The New York Times, MSNBC and CNN that the president was fully aware of his activities. This is Parnas speaking with MSNBC’s Rachel Maddow.

Rachel Maddow: “What do you think is the main inaccuracy or the main lie that’s being told that you feel like you can correct?”

This week, House Democrats released text messages Parnas exchanged with Robert Hyde, a Republican congressional candidate from Connecticut, in which the two have threatening exchanges about Marie Yovanovitch, the U.S. ambassador to Ukraine. In the text messages, Parnas and Hyde discuss how Yovanovitch was under surveillance. After headlines, we’ll have the latest on the Ukraine scandal and the impeachment of President Donald Trump. The Pentagon says U.S. troops have resumed joint operations with Iraqi soldiers, ending a 10-day pause that came after President Trump ordered the assassination of Iranian General Qassem Soleimani. He was killed near Baghdad International Airport in a drone strike on January 3. This comes less than two weeks after the Iraqi parliament ordered all U.S. troops to leave Iraq. On Capitol Hill, the top government watchdog for Afghanistan reconstruction told lawmakers Wednesday that U.S. officials have routinely lied to the American public throughout the U.S.-led war in Afghanistan, now in its 19th year. Special Inspector General John F. Sopko was testifying to the House Foreign Affairs Committee.

Last month, The Washington Post published excerpts from a confidential trove of documents that revealed how senior U.S. officials have repeatedly lied about the war’s progress while hiding evidence the war had become unwinnable. 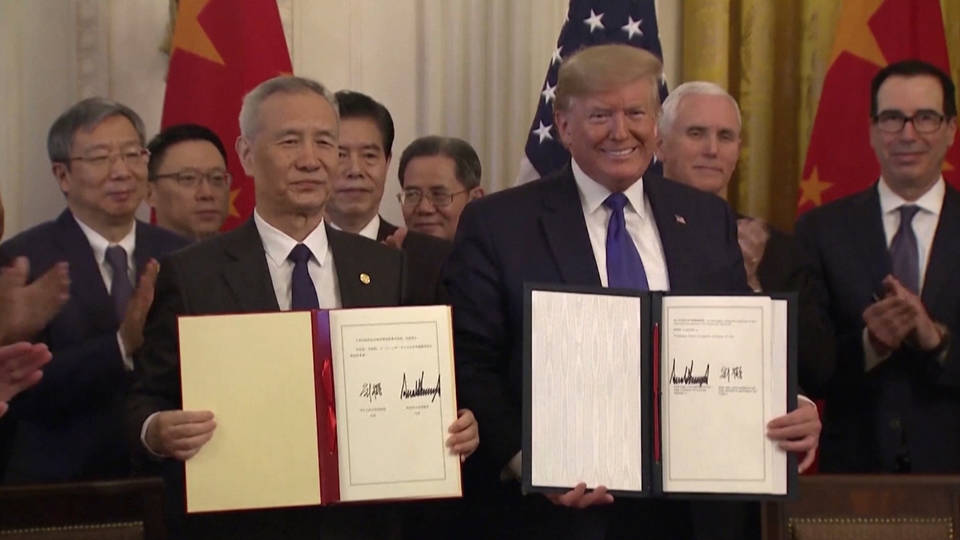 President Trump on Wednesday signed a deal with China that partially ends the trade war he began a year-and-a-half ago. Under the so-called Phase 1 agreement, China agreed to stronger protections for U.S. technology firms’ intellectual property rights and trade secrets. China also agreed to increase imports of U.S. goods by $200 billion by the end of the year. This comes as the U.S. Senate is expected to pass the United States-Mexico-Canada Agreement today — the replacement for NAFTA, the 1994 North American Free Trade Agreement. In Russia, Prime Minister Dmitry Medvedev abruptly resigned Wednesday along with his entire Cabinet in a surprise move that paves the way for President Vladimir Putin to remain in power after his final presidential term ends in 2024. Putin has proposed sweeping constitutional changes to expand the power of the parliament and the State Council while weakening the presidency. The Russian parliament is expected to vote today to confirm Putin’s pick for new prime minister, Mikhail Mishustin, a bureaucrat who runs Russia’s tax service. Later in the broadcast, we’ll have more on Russia’s political shake-up.

At Least 21 Killed in Idlib Amid Syrian, Russian Airstrikes 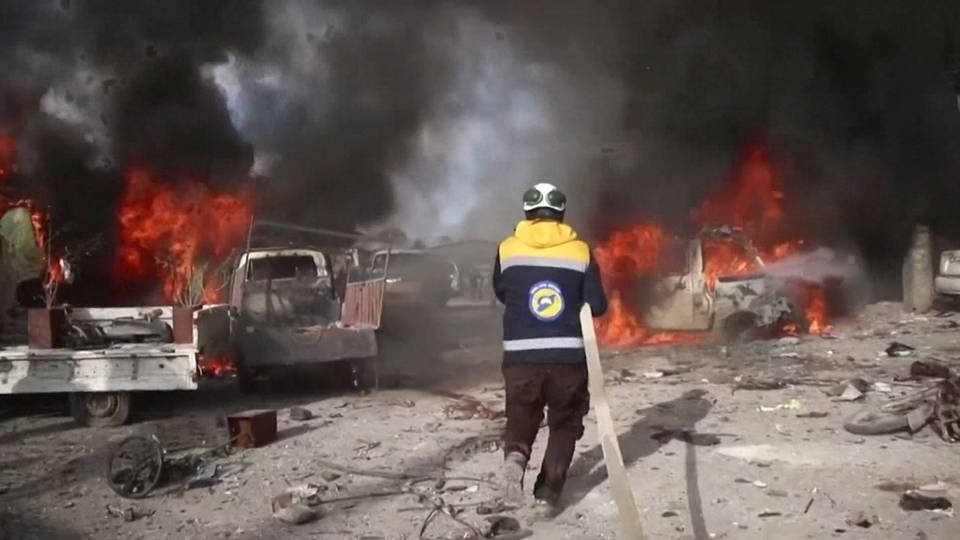 In Syria, at least 21 people have been killed in Idlib, the last rebel-held province, after Syrian forces backed by Russian jets assaulted towns across the region. In Idlib city alone, 15 people were killed when Syrian and Russian jets struck two main markets, littering the streets with bodies and debris. The violence came just days after a ceasefire agreement brokered by Russia and Turkey was supposed to take effect. 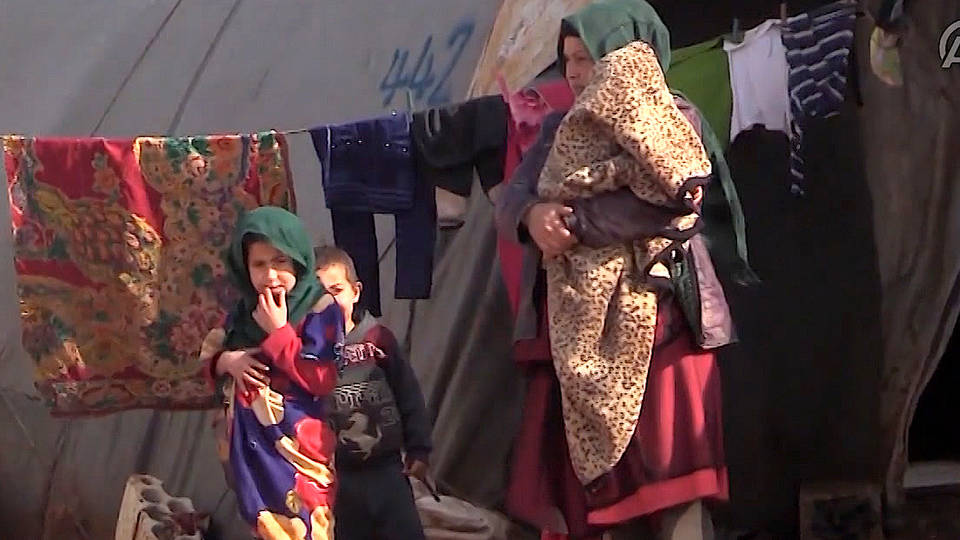 A federal judge in Maryland has blocked President Trump’s executive order granting state and local governments the power to reject refugees from resettling in their jurisdictions. The preliminary injunction will give more time to nonprofit groups to challenge Trump’s order, which they say violates the 1980 Refugee Act. The injunction overturns Texas Republican Governor Greg Abbott’s decision — made last week — to opt out of the refugee resettlement program. The American Civil Liberties Union has sued the Trump administration over its policy of sending asylum seekers at the U.S.-Mexico border to Guatemala. Under a deal last summer between President Trump and Guatemala’s now-departed President Jimmy Morales, the U.S. government began deporting Honduran and Salvadoran asylum seekers to Guatemala, denying them a right to pursue refugee status in the United States. In its lawsuit, the ACLU wrote, “The Trump administration has created a deadly game of musical chairs that leaves desperate refugees without a safe haven, in violation of U.S. and international law.” In Vermont, the Department of Motor Vehicles says it will change its policies and provide employees with anti-discrimination training, as part of a settlement with an immigrant rights group that says federal immigration officials used the DMV to crack down on politically active immigrants. Documents obtained by the ACLU and the group Migrant Justice revealed that Immigration and Customs Enforcement — ICE — used Vermont’s DMV to aid its enforcement efforts for years, dating back to the Obama administration, with DMV officials sending immigrants’ license plate information to ICE, along with personal documents, and indicating people they believed were undocumented. The DMV’s actions led to the deportation of leaders of the group Migrant Justice. Virginia lawmakers voted Wednesday to become the 38th U.S. state to approve the Equal Rights Amendment, which would guarantee equal legal protections regardless of gender. The constitutional amendment was approved by Congress in 1972 and was ratified by 35 states over the next decade — three states short of the required total needed by a 1982 deadline. President Trump’s Justice Department has argued that Virginia’s adoption of the ERA came too late, and the fate of the amendment appears likely to remain in doubt for years while courts take up the issue.

2019 Was the Second-Hottest Year on Record, Capping the Warmest-Ever Decade The 2010s were the hottest decade ever recorded, as atmospheric carbon dioxide levels soared to record levels. That’s according to a new report based on data from NASA, NOAA and other agencies, which found global surface temperatures surged by more than 1 degree Celsius — or about 1.8 degrees Fahrenheit — above pre-industrial levels. 2019 was the planet’s second-hottest year on record, surpassed only by 2016. This is climate scientist Omar Baddour of the World Meteorological Association. In London, England, climate activists with the group Extinction Rebellion held a “die-in” protest outside the corporate offices of Siemens, calling out the German company over its support for the Adani coal mine in Queensland, Australia — a major source of greenhouse gas emissions. Meanwhile, Extinction Rebellion activists in Aberdeen, Scotland, locked themselves together in a human chain to block the offices of Shell Oil Company, holding signs that read “Tell the Truth” and “Fossil Fuels Equal Extinction.” The state of Virginia has declared a temporary state of emergency ahead of a gun rights rally scheduled for Monday — MLK Day. Authorities say they believe “armed militia groups plan to storm the Capitol.”