We air highlights from the second day of questioning of President Trump’s Supreme Court nominee Amy Coney Barrett, who faced eight hours of questions on Wednesday about her views on issues ranging from climate change to voting rights to gay marriage and abortion, as Republicans race to confirm her ahead of the election and secure a 6-3 majority on the Supreme Court for conservatives.

We spend the rest of the hour — we spend now the rest of this time looking at the Senate confirmation hearing in the Senate Judiciary Committee, which is reconvening today for the final hearing for President Trump’s Supreme Court nominee Amy Coney Barrett, the right-wing judge who once clerked for Justice Antonin Scalia. If confirmed, she gives conservatives a 6-to-3 majority on the high court. Judge Barrett faced eight hours of questions Wednesday, after a marathon 11 hours Tuesday, as Republicans race to confirm her before Election Day.

We end with some of the key exchanges from Wednesday’s hearing, such as this one between Democratic Senator Kamala Harris, Joe Biden’s running mate, when Judge Barrett refused to say if she thinks climate change is happening.

SEN. KAMALA HARRIS: Climate change, as many have mentioned, is an existential threat, and its effects are all around us. Do you accept that COVID-19 is infectious?

JUDGE AMY CONEY BARRETT: I think, yes, I do accept that COVID-19 is infectious, that that’s something of which I feel like, you know, we could say you take judicial notice of. It’s an obvious fact, yes.

SEN. KAMALA HARRIS: Do you accept that smoking causes cancer?

JUDGE AMY CONEY BARRETT: I’m not sure exactly where you’re going with this, but, you know, the notice that smoking causes —

SEN. KAMALA HARRIS: It’s just a question. The question is what it is. You can answer it, if you believe, yes or no.

SEN. KAMALA HARRIS: And do you believe that climate change is happening and is threatening the air we breathe and the water we drink?

JUDGE AMY CONEY BARRETT: Senator, again, I was wondering where you were going with that. You have asked me a series of questions, like, that are completely uncontroversial, like whether COVID-19 is infectious, whether smoking causes cancer, and then trying to analogize that to eliciting an opinion on me that is a very contentious matter — opinion from me that is on a very contentious matter of public debate. And I will not do that. I will not express a view on a matter of public policy, especially one that is politically controversial, because that’s inconsistent with the judicial role, as I have explained.

SEN. KAMALA HARRIS: Thank you. Thank you, Judge Barrett. And you’ve made your point clear that you believe it’s a debatable point.

AMY GOODMAN: That’s Senator Kamala Harris questioning Judge Barrett. During two days of hearings, Judge Barrett has repeatedly refused to answer questions about her views on abortion and the future of Roe v. Wade, despite her public record opposing reproductive rights. Judge Barrett also repeatedly dodged questions on the Supreme Court’s Obergefell v. Hodges ruling, which said same-sex couples could not be denied the right to marry. This is her exchange with Democratic Senator Richard Blumenthal of Connecticut.

JUDGE AMY CONEY BARRETT: Senator Blumenthal, every time you ask me a question about whether a case was correctly decided or not, I cannot answer that question, because I cannot suggest agreement or disagreement with precedents of the Supreme Court. All of those precedents bind me now as a 7th Circuit judge. And were I to be confirmed, I would be responsible for applying the law of stare decisis to all of them.

SEN. RICHARD BLUMENTHAL: Think of how you would feel.

JUDGE AMY CONEY BARRETT: Well, Senator, you’re implying that I’m poised to say that I want to cast a vote to overrule Obergefell. And I assure you I don’t have any agenda, and I don’t — I’m not even expressing a view in disagreement of Obergefell. You’re pushing me to try to violate the judicial canons of ethics and to offer advisory opinions, and I won’t do that.

SEN. RICHARD BLUMENTHAL: And I’m not asking you hypotheticals. These are real cases. First, Brown v. Board of Education, do you think it was correctly decided? I know you told Senator Graham you thought so. I’d like you just to clarify that point.

JUDGE AMY CONEY BARRETT: Sure. So, as I said to Senator Graham when he asked me that question, I have spoken on that before. And the originalism lecture that I give — and said yes.

SEN. RICHARD BLUMENTHAL: Thank you. Let me ask you about Loving v. — the Loving case. Do you think that was correctly decided?

SEN. THOM TILLIS: I just want to make sure I heard you right in your responses to other questions. You do feel very strongly that every American should have safe access to the vote. And I, for one, hope that every registered voter in this country vote on November 11th. That may be a stretch goal, but do you agree with that?

AMY GOODMAN: For the record, Election Day is November 3rd, not November 11th. And then we turn to New Jersey Democratic Senator Cory Booker questioning Judge Barrett about her views on race.

SEN. CORY BOOKER: And this year, clearly, we’ve been grappling as a nation with a lot of these issues. And it is a part of our long-standing history. You cannot divorce the role of judges in our history over these some 200 years and how race has been a persistent part of the national narrative, grappling with deep issues of bigotry and bias, overt as well as the biases that exist. We know that many of the unjust deaths of unarmed African Americans at the hands of law enforcement have brought this even more into public — more into public concern. … I was actually asking specifically any books you can name that you’ve read on this subject, or law review articles, anything that you specifically read outside of the sentencing guidelines?

JUDGE AMY CONEY BARRETT: Well, Senator Booker, I would say that what I have learned about it has mostly been in conversations with people. And, you know, at Notre Dame, as at many other universities, it’s a topic of conversation in classrooms. But it’s not something that I can say, yes, I’ve done research on this and read X, Y and Z.

SEN. CORY BOOKER: You’re not citing articles or research that you’ve read on this issue, yet you have written here about it. And to me, that speaks — it makes me wonder and want to talk to you a little bit about your preparedness and priorities, taking the highest office in the judicial world, that deals with such long-standing issues of race and in a way that affects the totality of the lives of Americans.

SEN. BEN SASSE: What are the five freedoms of the First Amendment?

AMY GOODMAN: Some of the highlights. We’ll talk more about these hearings on Friday’s broadcast. And you can go to democracynow.org to watch the live stream of today’s final day of the hearing and all the Senate confirmation hearing for Judge Amy Coney Barrett.

That does it for our broadcast. I’m Amy Goodman, with Nermeen Shaikh. Stay safe. Wear a mask. Save lives. 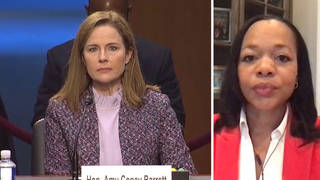