As the World Food Programme wins the 2020 Nobel Peace Prize for its efforts to combat hunger around the world, we speak with Vijay Prashad, director of Tricontinental: Institute for Social Research, who says the United Nations body is doing vital work around the world. “I couldn’t be happier that the World Food Programme won the Nobel Prize for peace, because this hunger pandemic is paralyzing perhaps 2.7 billion people,” he says.

Shortly before we went to broadcast this morning, this year’s Nobel Peace Prize was announced.

BERIT REISS-ANDERSEN: The Norwegian Nobel Committee has decided to award the Nobel Peace Prize for 2020 to the World Food Programme for its efforts to combat hunger, for its contribution to bettering conditions for peace in conflict-affected areas, and for acting as a driving force in efforts to prevent the use of hunger as a weapon of war and conflict.

DAVID BEASLEY: In my conversations with world leaders over the past many months, before the coronavirus even became an issue, I was saying that 2020 would be facing the worst humanitarian crisis since World War II for a variety of reasons, such as the war in Syria, Yemen; the deepening crises in places like South Sudan and, as Jan Egeland, I know, will no doubt set out, about Burkina Faso and the Central Sahel region; the desert locust swarms in Africa, as the Director General Qu highlighted in his remarks; and more frequent natural disasters and changing weather patterns that we’re experiencing; the economic crisis in Lebanon, which is impacting millions of Syrian refugees; DRC, Sudan, Ethiopia — and the list goes on. We’re already facing a perfect storm. So, today, with COVID-19, I want to stress that we’re not only facing a global health pandemic, but also a global humanitarian catastrophe.

AMY GOODMAN: That was David Beasley, the former South Carolina governor, is now head of the World Food Programme, speaking to the United Nations Security Council earlier this year.

For more, we’re joined by Vijay Prashad, director of the Tricontinental: Institute for Social Research, author of The Poorer Nations: A Possible History of the Global South and many other books, including his latest, Washington Bullets: A History of the CIA, Coups, and Assassinations.

Vijay, welcome back to Democracy Now! Can you respond to this latest announcement, and talk about the issue of global hunger, already a catastrophic problem in the world, now accentuated by the pandemic?

VIJAY PRASHAD: Amy, good to be with you.

I couldn’t be happier that the World Food Programme won the Nobel Prize for Peace, because this hunger pandemic is paralyzing perhaps 2.7 billion people. You know, we have seen an escalation of hunger. Nobody should go to sleep hungry at night. And the World Food Programme, the U.N.’s Food and Agricultural Organization, they have been struggling to tackle this.

The hunger issue is very significant. It was there, as David Beasley correctly put it, before the pandemic. There’s been an increase in agrobusiness, moving cash crops and displacing small farmers, you know, who produce most of the world’s food. This creates a great crisis in the countryside, long before the pandemic.

During the pandemic, Amy, I don’t know if you saw this, but in Guatemala, in Guatemala City, in fact, people were flying white flags to say, “We are hungry,” as if in surrender. And David Beasley told the U.N. Security Council we cannot let the world population surrender.

Speaking of surrender, of course, he mentioned Yemen in his remarks. The World Food Programme, Food and Agriculture, other U.N. humanitarian organizations say that half of Yemen’s 28 million people are in famine conditions. This includes almost 10 million children, in a war that Saudi Arabia, United Arab Emirates, backed by arms suppliers from the United States, the United Kingdom and so on, unrelenting war against the Yemeni people, half the population in hunger.

Nothing makes me happier that the issue of hunger, which should be abolished in the modern world, is out there because of this prize. It’s a really significant day for all those on the frontlines trying to make sure that people are fed daily.

AMY GOODMAN: And, of course, it’s a very significant response to yesterday, though it was chosen well before, when the Trump administration announced it’s imposed new sanctions on Iran’s financial sector, despite opposition from European countries, who warn the move could have devastating humanitarian consequences amidst the pandemic and ongoing sanctions. Critics say the new move will likely shut off channels Iran uses to import food and medicine. The foreign minister, Javad Zarif, called it a “crime against humanity.”

VIJAY PRASHAD: This is a crime against humanity, certainly. And there is ample evidence for that. But it’s also extraordinarily cruel, Amy. I mean, I think the cruelty of it needs to be underlined. This is a moral issue as much as it’s a legal issue, you know, in the framework of international law. It’s immoral. People should be outraged by the cruelty of this action.

I mean, we are seeing these sanctions used to punish people, medicines not able to enter Iran, planes not willing to fly in because they’re afraid of secondary sanctions. I mean, this is precisely what the World Food Programme has been finding as one of the main difficulties, is they can’t get transport into countries. You know, they couldn’t get into the main port in Yemen that was being bombed. Transportation is a real challenge.

And you’ve got to say that the people in these U.N. agencies, it’s not just the World Food Programme, not just the Food and Agriculture Organization world; it’s the World Health Organization, it’s UNESCO, it’s UNICEF. There’s a reason the U.S. government is going after these U.N. agencies. And, you know, I shouldn’t be the one, Amy, explaining why the U.S. government is going after these agencies. I’d like to see the administration of the United States explain to the world why they are sanctioning, why they are going after agencies like the U.N. Children’s Fund. You know, what is their problem with the World Health Organization in the midst of a pandemic? It’s really quite heartbreaking to see this cruel policy emanating from Washington, D.C.

AMY GOODMAN: And finally, Vijay Prashad, the connection between hunger in the world and climate change? You had the vice president of the United States, Mike Pence, in his debate with Kamala Harris, who President Trump has just called a “monster” and a “communist” — when he was asked about climate change, he said, “Yes, the climate is changing.”

And when they try — and this is very significant — when Thomas Sankara in the 1980s tried to bring cooperative farming to Burkina Faso, there was a coup against him, engineered with the active participation of the French intelligence services and, most likely, with the CIA. These are goodhearted people trying to bring good into the world. They get overthrown.

And these people who are now in charge and unwilling to look reality in the eye and say, “Yes, something very significant is happening. The climate has changed in a very deleterious way. We must do something to reverse that,” they are not serious people, Amy. They seem, to me, driven by a streak of cruelty, which breaks my heart.

AMY GOODMAN: And finally, you mentioned Yemen, but the connection between war in Yemen and this massive hunger, the U.S.-supported Saudi-UAE war on the people of Yemen, with the — most recently, Jared Kushner working a deal with UAE to give them F-35 fighter planes, something that had been forbidden for years?

VIJAY PRASHAD: The U.N. Secretary-General António Guterres, at the start of the pandemic, begged the world’s belligerents, really, begged them to have a ceasefire. And he had Yemen directly in his sights. He wanted that war in Yemen to be stopped for the duration, at least, of the pandemic, if not forever.

And, you know, it’s a really hypocritical thing that you have the British arms agencies, the companies like BAE Systems, the British government, the American government continuing to arm the United Arab Emirates and Saudi Arabia, continuing to give them logistical support in this ruthless war, which is driving, as I said, 10 million children to starvation in Yemen.

AMY GOODMAN: Vijay Prashad, I want to thank you so much for being with us, director of Tricontinental: Institute for Social Research, author of many books, his latest just out, Washington Bullets: A History of the CIA, Coups, and Assassinations. We’ll have you back on to talk about that.

Coming up, we look at what’s happening in Armenia and Azerbaijan. Both sides have just agreed to hold talks in Moscow. Stay with us.

Armenia-Azerbaijan Conflict: Why Turkey’s Intervention Could Turn It into a “Proxy War”

NEXTArmenia-Azerbaijan Conflict: Why Turkey’s Intervention Could Turn It into a “Proxy War” 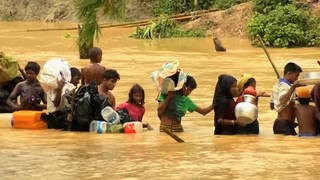