Climate and racial justice activists are mobilizing with union members and newly elected members of Congress at the headquarters of the Democratic National Committee to call on President-elect Joe Biden to address the intersecting crises of the pandemic, economy and climate change. They’re also calling for Biden to create a “corporate-free Cabinet,” following his recent announcement of aides that included people with close ties to the pharmaceutical and fossil fuel industries. Waleed Shahid, spokesperson for the progressive group Justice Democrats, says it will be important to maintain pressure on the incoming administration in order to fulfill grassroots demands. “Unlike President Obama in 2008, there is not much of a honeymoon period,” Shahid says.

Today, climate and racial justice activists are joining unions and newly elected members of Congress to call on President-elect Joe Biden to address COVID, the economy and climate change, and appoint a, quote, “corporate-free Cabinet.” Their push comes as Biden announced several new appointments Tuesday, including Louisiana Congressmember Cedric Richmond to lead the White House Office of Public Engagement. The Sunrise Movement described the appointment of Richmond as a “betrayal” because he’s the leading Democratic recipient of fossil fuel money in Congress.

This comes as the Sunrise Movement and Justice Democrats are pushing the Biden team to place progressives in key Cabinet positions. Their dream team includes Barbara Lee as secretary of state, Elizabeth Warren as treasury secretary, Keith Ellison as attorney general, Bernie Sanders as secretary of labor, Mustafa Ali as EPA administrator and Deb Haaland as secretary of interior.

It’s great to have you back with us. Can you talk, Waleed, about what the response has been to the Cabinet and the staff appointments so far? Begin with Cedric Richmond and your concerns.

WALEED SHAHID: Yeah, I think progressives are upset with the appointment of Cedric Richmond as one of the leading recipients of fossil fuel donations. He took money from the corporate PACs of Exxon, Chevron, Valero just this past year. And he is someone who his own constituents, in New Orleans, in Louisiana, have said have not taken the issue of regulating the fossil fuel industry, toxic pollution from the fossil fuel industry, and the climate crisis seriously. So, you know, we are concerned that Representative Richmond was appointed to the inner circle.

Steve Ricchetti was also appointed to the inner circle. He is a Big Pharma lobbyist, has worked for groups who oppose allowing the government to manufacture prescription drugs, and opposed Medicare for All.

And now, going forward, you know, we have heard news that Deb Haaland is being considered for secretary of the interior. You know, I think this might have been leaked in response to the progressive outcry about these two more corporate-friendly appointments.

And looking forward, we really have to keep a tight eye and scrutiny over this fight for the soul of the Biden presidency. Will they appoint all of these corporate-friendly insiders, or will they appoint significant numbers of progressives, who make up — you know, nearly 40% of the seats of Democrats in the House are members of the Progressive Caucus. And so, we think that we deserve adequate representation, if Joe Biden wants to be a unity president and represent the entirety of the Democratic coalition.

NERMEEN SHAIKH: And, Waleed, on the basis of the appointments made so far, you know, there’s been a lot of discussion about what you’ve just mentioned, the split within the Democratic Party between progressives and centrists. How do you think it’s going to go, the Biden-Harris administration? Which direction do you see them tilting in on the basis of the appointments they’ve already made?

WALEED SHAHID: So, the appointment of Ron Klain as chief of staff is an interesting one. The other two men in consideration for that, you know, one of the most prominent roles in the White House, were much more hostile to progressives, much more ideologically neoliberal, ideologically part of the conservative wing of the Democratic Party — namely, Bruce Reed and Steve Ricchetti. And so, appointing Ron Klain was a significant sign. You know, he has given statements saying that he understands that the party has become more progressive, has gone in a progressive direction, especially over the last four years.

And so, you know, we have to be optimistic, because we want Joe Biden to deliver on behalf of working families, but we have to also keep a close eye. The good thing is that unlike President Obama in 2008, there is not much of a honeymoon period, as you can tell, for Joe Biden. I think there will be a lot of scrutiny and oversight in terms of wanting more corporate-free appointments to this administration. We hope we’ll get some.

AMY GOODMAN: And can you talk about the call for Bernie Sanders to be made labor secretary? Do you see that actually happening?

WALEED SHAHID: Yeah, I think Bernie Sanders would make a great labor secretary. You know, we also — we called for three people per position that we thought would be great. Bernie Sanders is obviously one of the most tireless fighters for working families. We would also be happy to see Representative Andy Levin, who is also being considered for that role, as well as Mary Kay Henry, who is the president of the SEIU.

And having someone in all these departments dedicated to bold action, especially if Mitch McConnell controls the Republican Senate, we need people in executive positions who are going to use the full power of the federal government to move forward an agenda that actually solves people’s problems and doesn’t allow Mitch McConnell to rob the American majority from governing.

AMY GOODMAN: Finally, the protest that’s being held today, what exactly are the demands, as people gather together around the country? And your response to those Democrats and the Republicans who, you know, went from Republican to Democrat in their vote for President-elect Biden, in saying you must be quiet until the final runoff elections in Georgia?

WALEED SHAHID: Yeah, one of the really strange things is to see Democrats, some conservative Democrats, go on television and say how excited they are to bring forth a new era of bipartisanship, of working across the aisle, how they’re optimistic that Joe Biden and Mitch McConnell can strike some deals. But, you know, if you actually look across the aisle, it’s a scary situation. I mean, Mitch McConnell has amplified President Trump’s efforts to orchestrate a coup, to delegitimize the Biden victory, and therefore delegitimize the next four years of a Biden presidency. And that’s — the majority of Republicans in Congress are acting that way. And then —

WALEED SHAHID: — you know, for Democrats to allow Mitch McConnell to rob this majority of governing would be really terrible for all the Democrats who poured their heart out for Joe Biden and wanted bold action and fundamental change.

AMY GOODMAN: Waleed Shahid, I want to thank you for being with us, spokesperson for Justice Democrats. I’m Amy Goodman, with Nermeen Shaikh. Wear a mask. 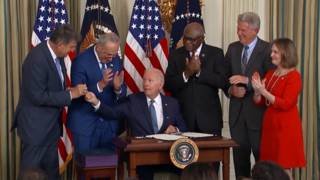