Feminism Not Militarism: Medea Benjamin on the Movement to Oppose Michèle Flournoy as Pentagon Chief

President-elect Joe Biden has introduced key members of his national security team this week, including his picks for secretary of state, national intelligence director, national security adviser, homeland security chief and ambassador to the United Nations. Biden has yet to announce his defense secretary, but progressives are already raising alarm over reports that he intends to nominate Michèle Flournoy, a hawkish Pentagon veteran with close ties to the defense industry. If nominated, Flournoy would become the first woman to lead the Department of Defense. “She represents the epitome of what is worst about the Washington blob, the military-industrial complex’s revolving door,” says CodePink co-founder Medea Benjamin. “Her whole history has been one of going in and out of the Pentagon … where she supported every war that the U.S. engaged in, and supported increases in the military budget.”

StoryJun 02, 2022Anatol Lieven on Why the U.S. Must Avoid a “Permanent Crusade Against Russia” over Ukraine

AMY GOODMAN: President-elect Joe Biden has introduced key members of his national security team, with a vow to reembrace the world, in a clear rejection of Trump’s “America First” foreign policy.

PRESIDENT-ELECT JOE BIDEN: The team meets this moment. This team, behind me. They embody my core beliefs that America is strongest when it works with its allies.

We’ll hear more about them in our next segment, but first we turn to look at a member of Biden’s national security team who has not yet been announced. We don’t know who his pick for the secretary of defense will be. Several media outlets have reported Biden planned to nominate Michèle Flournoy, but progressives, including some lawmakers, are speaking out in opposition.

If nominated and confirmed, Flournoy would become the first woman in the post. She served as undersecretary of defense for policy in the Obama administration from 2009 to 2012. After she left, she founded the consultancy firm WestExec Advisors with Tony Blinken, now the secretary of state nominee. The secretive consulting firm, with the motto “Bringing the Situation Room to the Board Room,” has many former Obama administration officials on staff, including former CIA Deputy Director Avril Haines, who helped design Obama’s drone program, is now Biden’s pick for director of national intelligence.

California Congressmember Ro Khanna tweeted, quote, “Flournoy supported the war in Iraq & Libya, criticized Obama on Syria, and helped craft the surge in Afghanistan. I want to support the President’s picks. But will Flournoy now commit to a full withdrawal from Afghanistan & a ban on arms sales to the Saudis to end the Yemen war?” Ro Khanna asked.

Well, Medea Benjamin joins us right now. She is co-founder of CodePink, author of a number of books, including Kingdom of the Unjust: Behind the U.S.-Saudi Connection; her latest book, Inside Iran: The Real History and Politics of the Islamic Republic of Iran.

Medea, welcome back to Democracy Now! In a moment, we’re going to talk about President-elect Biden’s picks. This is a person who has not yet been named, an extremely important position, the secretary of defense. Can you talk about your concerns and what’s going on behind the scenes, both in the grassroots community and among progressive lawmakers?

MEDEA BENJAMIN: [inaudible] Flournoy, yet it shows that there is some division within Biden’s people on this right now. She represents the epitome of what is worst about the Washington blob, the military-industrial complex’s revolving door. Her whole history has been one of going in and out of the Pentagon, first under President Clinton, then under President Obama, where she supported every war that the U.S. engaged in, and supported increases in the military budget, and then used her contacts in government in these kind of hawkish think tanks that she either joined or helped create. She sits on the board of a corporation that works with defense contractors. She herself has made a lot of money by parlaying these insider contacts into positioning companies to be able to get these very plush Pentagon contracts. She also sees China as an enemy that has to be confronted with higher-tech weapons, which justifies increased Pentagon spending and puts us on a dangerous path of an increased cold war with China. So, these are just some of the reasons we think she would be a disastrous pick as secretary of defense.

JUAN GONZÁLEZ: Well, Medea, she not only worked in the Defense Department under Obama, she also worked in the Defense Department under Bill Clinton and was rumored to be Hillary Clinton’s first choice as secretary of defense, had Hillary won the election in 2016. So she definitely is, as you say, part of this establishment of the military-industrial complex going way back. But could you talk about this WestExec Advisors that she helped to create? And we already have two people from that consultancy, that strategic advisory consultancy, named by Biden. She would be the third if she was chosen. What has been the role of this barely known group, outside of Washington?

MEDEA BENJAMIN: Well, that’s right. And that’s why it’s so important to look at this WestExec Advisors, first of all, to understand that it’s a secret organization [inaudible] reveal who its clients are. But we do know that it has been working with Israeli companies. It seems that they work with the United Arab Emirates. And their job is to get contracts for the Pentagon from companies, including companies from Silicon Valley. This is the worst of Washington.

Yes, he’s already picked Antony Blinken, who is the co-founder with Michèle Flournoy — bad enough. Bad enough that they brought in Avril Haines, who is part of WestExec Advisors. But this consulting firm, that seems to be Biden’s government-in-waiting, represents the kind of Washington insider revolving door, makes sure that companies have an easy in into the Pentagon, and using these insiders from both the Bill Clinton years and the Obama years — and especially the Obama years — to grease the wheels for those companies. So, you know, unfortunately, we would like to know more about WestExec Advisors, but it is, as I say, a company that won’t reveal who its clients are.

AMY GOODMAN: Reading from an article, “The website for WestExec Advisors includes a map depicting West Executive Avenue, the secure road on the White House grounds between the West Wing and the Eisenhower Executive Office Building, as a way to show what the consulting firm can do for its clients … 'quite literally, the road to the Situation Room, and … the road everyone associated with WestExec Advisors has crossed many times en route to meetings of the highest national security consequences.'” Medea, your piece in Common Dreams is headlined “Will Michele Flournoy Be the Angel of Death for the American Empire?” What do you mean?

MEDEA BENJAMIN: Well, I feel that we can go one of two ways: We continue on this route of trying to pretend that the U.S. has the right and the ability to dictate what the world should look like, which is Michèle Flournoy’s worldview, or Biden could go the other way, which is to understand that the U.S. is an empire in crisis, needs to take care of its problems here at home, like this pandemic, and has to decrease the enormous military budget that is eating up over half of our discretionary funds. And if he picks Michèle Flournoy, I think we will continue on that road of the declining empire, which will be terrible for us in the United States, because it will mean that we’ll continue these wars in Afghanistan, in Iraq, U.S. involvement in Syria, but also, at the same time, try to pivot to China, which we can’t possibly keep this empire going and try to deal with all the crises we have here at home.

JUAN GONZÁLEZ: And, Medea, you also write about Michèle Flournoy’s involvement with the Center on a New American Security, this think tank that she helped to create. Could you talk about what that’s produced and what she did there?

MEDEA BENJAMIN: Well, that is seen as one of the most hawkish think tanks. And it is one of the most well funded by precisely government and military contractors, as well as oil companies. So, it is an example, that she started herself, of leaving the administration from the Pentagon, creating — using her Rolodex to create this think tank and get it funded by the very companies that she dealt with when she was inside the Pentagon.

AMY GOODMAN: We’re going to break now. We want to thank you, Medea Benjamin, for joining us, co-founder of the peace organization CodePink, author of a number of books, including Kingdom of the Unjust: Behind the U.S.-Saudi Connection.

We’ll be joined by Bernie Sanders’ former speechwriter, David Sirota, as well as professor Barbara Ransby, to look at who was on the stage in Wilmington, Delaware, the choices that President-elect Biden has made so far. Stay with us. 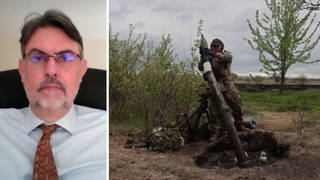 Anatol Lieven on Why the U.S. Must Avoid a “Permanent Crusade Against Russia” over Ukraine