Acclaimed poet and activist Nikki Giovanni has a new collection of poems called “Make Me Rain,” a celebration of her Black heritage, as well as an exploration of racism and white nationalism. In the poem “Vote,” Giovanni offers her thoughts on the importance of voting. It was filmed by The Meteor, a feminist collective of activists, journalists and creators, part of a daily Instagram series focusing on voting rights.

AMY GOODMAN: We end the show with the acclaimed poet and activist Nikki Giovanni. She’s out with a new collection of poems called Make Me Rain. In her poem “Vote,” Giovanni offers her thoughts on the importance of voting. This was filmed by The Meteor, a feminist collective of activists, journalists and creators, for a daily Instagram series focusing on voting rights.

NIKKI GIOVANNI: It’s not a hug
Nor mistletoe at Christmas

Saying you are
A citizen

I am a citizen

I must be able to vote

Folks vote to make us free

Good for the Folks
Good for Us
My country ’tis of thee.

AMY GOODMAN: Acclaimed poet and activist and professor Nikki Giovanni reading her poem “Vote,” which is in her new collection, Make Me Rain. Special thanks to The Meteor, a feminist collective of activists.

And a reminder: Democracy Now! will air a three-hour election night special tonight from 9 p.m. to midnight. I’ll be co-hosting with Juan González and Nermeen Shaikh. You can watch it live at our website, democracynow.org. We’ll be covering the results from the presidential election to congressional and state races, as well as ballot initiatives across the country. Democracy Now!'s election night special will feature interviews and perspectives that you won't hear anywhere else, including the voices of activists, analysts, grassroots leaders discussing how the movements on the ground will go forward following this historic election, starting at 9 p.m. through midnight Eastern time. And you can check your local station. 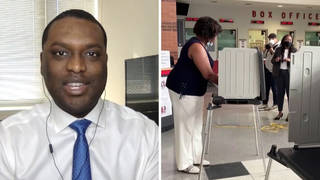