In New York, Democrats Mondaire Jones and Ritchie Torres are set to become the first two openly gay Black men elected to Congress, replacing lawmakers who are retiring after decades in Washington. Jones will represent New York’s 17th Congressional District, joining the progressive wing of the Democratic Party. He supports the Green New Deal, Medicare for All and a $15 minimum wage. “The era of small ideas is over,” Jones says. “I ran proudly on a progressive platform from the very beginning of my campaign.”

AMY GOODMAN: This is Democracy Now! I’m Amy Goodman, with Nermeen Shaikh, as we turn to New York, where Democrats Mondaire Jones and Ritchie Torres are set to become the first two openly gay Black members of Congress, replacing lawmakers who are retiring after decades in Washington. Ritchie Torres will represent New York’s 15th District in the Bronx. Mondaire Jones will represent New York’s 17th Congressional District, including Rockland County and parts of Westchester County. He is replacing the longtime Congressmember Nita Lowey. Mondaire Jones joins the progressive wing of the Democratic Party, supports the Green New Deal, Medicare for All, a $15 minimum wage — an hour.

We welcome you to Democracy Now! These are historic wins, coming as the Democrats have held on to their majority in the House but lost races in key conservative districts they won in 2018. Mondaire Jones, welcome back to Democracy Now! It was great to have you with us on election night. Can you talk about what your plans are right now? We are speaking to you on the eve of the announcement of who won the presidency today. What does your victory mean for this country?

REP.-ELECT MONDAIRE JONES: And what a joy it will be when President — the future President Biden is able to announce his victory in the coming hours or days.

With respect to my own election, it means that the era of small ideas is over. You know, I ran proudly on a progressive platform from the very beginning of my campaign, which, as you may recall, began as a primary challenge, and then it became an open seat, and anyone who had ever aspired to run for Congress relocated to the district, including the son of a bllionaire, who spent $5.4 million. People told me not to run on Medicare for All. They said it was too polarizing. In the midst of a global pandemic, it had more resonance than ever before. And so, I’m really grateful to have defied expectations and conventional political wisdom throughout the course of my year-and-maybe-four-months-long campaign.

NERMEEN SHAIKH: Mondaire Jones, you’ve spoken out about your experiences growing up, saying, for you, that policy is personal. Could you talk about that?

REP.-ELECT MONDAIRE JONES: Yeah. You know, unlike the people we’re used to seeing in our politics, I don’t come from money or from a political family. I grew up in Section 8 housing and on food stamps. And I was raised by a young single mom, who, like so many incredible women all throughout my district and all throughout this country, worked multiple jobs just to put food on the table for us.

So, when politicians in Washington debate the need for a $15 minimum wage, that’s not an abstraction for me. In fact, the $15 minimum wage, or a living wage, is a need I know to exist from first-hand experience. And by the way, my mom got help raising me from my grandparents. My grandfather was a janitor, and my grandmother cleaned homes. And when daycare was too expensive, she took me to work with her. And so, when people like Elizabeth Warren talk about the need to invest in universal childcare as infrastructure, that’s a fight I want to join when I get to Washington, based on not wanting any kid to have to go through what I went through when I was growing up.

NERMEEN SHAIKH: So, Mondaire Jones, could you talk about where election results stand now? You’ve previously advocated for election reforms, including ranked-choice voting and nationwide automatic voter registration. First, your response to how close this race has been, and then what you think the reforms you’ve advocated for — how that might change the way elections turn out?

REP.-ELECT MONDAIRE JONES: You know, we are still watching the data roll in, in these swing states, in particular, but your point is well taken. I think many of us, on November 3rd, expected the margins not to be what they were. We expected them to be more favorable, the vote count, towards Joe Biden. Of course, the absentee ballots skew heavily Democratic. And many folks who are expert in this area warned us not to freak out on November 3rd. So I’m waiting patiently with respect to that.

We’ll continue to press for democracy reforms. We have seen democracy reforms work here in New York state, where I reside. Early voting was a tremendous boon and, in fact, has saved a number of my colleagues, I think, in various parts of New York state that are more competitive than my own district here in New York 17th. And court expansion will have to continue to be part of the conversation. Obviously, if the Senate majority continues to be Republican, the prospects for a court expansion are significantly dimmer than they were just a few days ago when we expected a Democratic control of the Senate.

AMY GOODMAN: And I notice you’re using the word “court expansion,” not “court packing.” But I wanted to ask you about another issue, Mondaire, and that is — or, Congressmember-elect — the USPS, the U.S. Postal Service, shows thousands of mailed ballots missed Election Day deadlines, could be tens of thousands of ballots not getting to be counted. You’re involved in a lawsuit against the United States Postal Service yourself, that was just settled, is that right? Can you talk about the significance of this, with the postmaster general being Louis DeJoy, a megadonor to President Trump’s campaign?

REP.-ELECT MONDAIRE JONES: Absolutely. You know, I’ve been talking about how so many of our institutions have failed us these past few years, to say nothing of systems, like our healthcare system and the economic system that we have, that is rigged towards the wealthy and the well-connected and big corporations.

One of those institutions is the Postal Service. Who would have thought that I would have to sue the postmaster general and the president of the United States to suspend so-called operational changes which were meant to undermine a free and fair election this cycle? We got a nationwide injunction, maybe over a month ago at this point. And part of the relief in the Southern District of New York was the treatment of all election mail as either priority or first-class, and then the preapproval of overtime from the period spanning October 26th, I believe, through — or, 24th through November 6th. And so, these were commonsense things, in addition to weekly reports to confirm — for the district court judge to confirm compliance with his order.

But it is not surprising to me that deadlines were missed. And, of course, there has been litigation over this. If something’s in the mail and arrives within a reasonable period — if something is in the mail and it arrives, it ought to be counted. And, unfortunately, Republicans, at the state legislative level and in Congress, and even with the Supreme Court as an accomplice, have been working to undermine that basic principle that all votes should be counted.

NERMEEN SHAIKH: Mondaire Jones, your response to Trump’s accusations that the Democrats are trying to steal the elections, and to get vote counting to stop in critical states?

REP.-ELECT MONDAIRE JONES: You know, it is not — it is not anti-democratic to just want every vote to be counted. And I was casually watching cable television yesterday when I was with my brother and his wife. And, you know, I saw that at least some Republican senators also shared that view, that they publicly expressed. I think it was Mitch McConnell and Marco Rubio suggested that every vote should be counted. And so I think they’re getting tired of this president and his antics, as well.

AMY GOODMAN: What’s going to be the first thing —

NERMEEN SHAIKH: Well, one of the —

NERMEEN SHAIKH: Some of the policies you’ve advocated, Medicare for All and the Green New Deal, these are not policies that Biden has endorsed.

Medicare for All is going to continue to be a battle. Obviously, a public option would be an improvement upon the status quo. Let’s see what — let’s see what the Senate looks like. And then let’s see what Joe Biden is able to do using the office of the presidency to get Republicans to come to the table, if they maintain their majority in the Senate.

AMY GOODMAN: Mondaire Jones, we want to thank you for being with us, Democratic congressmember-elect for New York’s 17th Congressional District, one of two openly gay Black members of Congress, the first, making history in this country.

That does it for our show. You can track the presidential election, see the latest vote count, state by state, at democracynow.org. 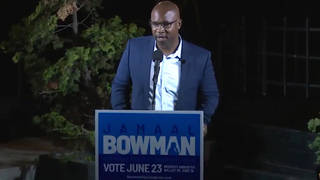