In what could be one of the biggest progressive upsets of the year, Jamaal Bowman, an African American former middle school principal, appears headed to victory over 16-term Democratic Congressmember Eliot Engel in Tuesday’s New York primary election. The race has not been called, but Bowman has a large lead over Engel, the powerful chair of the House Foreign Affairs Committee known for his support of Israel. Bowman supports a Green New Deal, Medicare for All and defunding the police. We air his remarks from a campaign party late Tuesday.

StoryJun 17, 2020Meet Jamaal Bowman, the Bronx Principal Challenging One of the Most Powerful Dems in Congress

AMY GOODMAN: We begin today’s show here in New York, where Jamaal Bowman, an African American former middle school principal, appears headed to pull off one of the biggest political upsets of the year. Though the race has not yet been called, Bowman is leading by 25 percentage points over 16-term Congressmember Eliot Engel, the powerful chair of the House Foreign Affairs Committee, in the Democratic primary for the 16th Congressional District in Westchester County and the Bronx. The Associated Press reports 92% or precincts have reported results, but it’s not clear how many absentee ballots still need to be counted. Jamaal Bowman ran on a Green New Deal, Medicare for All platform and joined recent protests demanding an end to racism and police brutality. He spoke at a campaign party late Tuesday.

JAMAAL BOWMAN: I’m a Black man in America, you know, raised by a single mom, you know, spent some time in the housing projects, lived in rent-stabilized apartments, went to public schools my entire life, grew up during the crack cocaine epidemic, which hurt and ravaged many parts of my family, as well as my friends’ families, as well. You know, my best friend, who’s here tonight, I’ll never forget the night he called me, when I was out partying at a club, and told me his brother was shot and killed. And at a very young age as a Black man in America, you get to learn about death and homicide and suicide, and how it impacts not just you individually, but your community and the rest of the country.

And it was these experiences that led me to being an educator in the first place. And I served in that role as an educator with pride and passion and dignity, and tried my best to do everything I could to uplift the lives of every child that I taught and every child that I served, and to do everything I could to make sure families had what they needed and that they understood and leveraged the power of their voices.

Unfortunately, as we all know, we live in a country where, despite our financial wealth, we have tens of millions of children still living in poverty. And as an educator working for the Department of Education for 20 years, I’ve seen the impact of poverty on the lives of our kids each and every day. And poverty is not a result of children and families who don’t work hard. Our children and families work as hard as anyone else. Poverty is by political design, and it’s rooted in a system that has been fractured and corrupt and rotten from its core from the inception of America, especially over the last several decades.

So, poverty and the impact of poverty on our children, and dealing with issues of institutional racism and sexism and classism and xenophobia and everything that keeps the majority of us oppressed, is what we designed this campaign to fight against. So, tonight, as we celebrate, we don’t just celebrate me as an individual. We celebrate this movement, a movement designed to push back against a system that’s literally killing us. It’s killing Black and Brown bodies disproportionately, but it’s killing all of us. …

So, if the results continue to bear out as they are bearing out this evening and we get to Congress, it will be our job to hold Donald Trump accountable and to hold every elected official accountable that continues to be beholden to corporate interests, that continues to be beholden to the wealthy and is not fighting for the poor and is not fighting for the working class in our country, because, America, if we are truly powerful, we should use that power to create peace all over the world, to become a humanitarian leader on this planet and to make sure we have housing and jobs and fully funded schools and infrastructure and healthcare that’s exemplary and humane immigration reform and a humane restorative justice system that reinvests in communities that have been historically neglected.

AMY GOODMAN: Jamaal Bowman, speaking last night, a Black middle school principal from the Bronx who’s taken a strong lead over 16-term Congressmember Eliot Engel, chair of the House Committee on Foreign Affairs, in the Democratic primary for 16th Congressional District in Westchester County and the Bronx. To see our interview with Jamaal Bowman, you can go to democracynow.org.

This is Democracy Now! When we come back, a Palestinian man is gunned down by the Israeli military in the West Bank. We’ll speak to his cousin, the well-known scholar Noura Erakat. Stay with us. 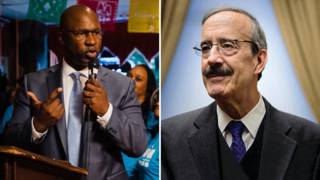