Ethiopia’s PM Won the Nobel Peace Prize A Year Ago; Now He Is Leading Nation Into Possible Civil War

Ethiopian Prime Minister Abiy Ahmed was awarded the Nobel Peace Prize in 2019 for ending the two-decade “state of war” between Ethiopia and Eritrea, with many hailing a new era of peace in the region. Just one year later, Ahmed’s military has displaced tens of thousands of civilians in an ongoing military campaign in the northern Tigray region. Thousands have died since Ethiopia declared war on the Tigray People’s Liberation Front in early November, and at least one massacre has been reported. Ethiopia has admitted federal troops fired at and detained U.N. workers in the northern Tigray region for attempting to enter areas they say are forbidden. Awol Allo, associate professor at the Keele University School of Law in the United Kingdom, was among those who nominated Ahmed for the Nobel Peace Prize, but he now says the prime minister has dashed hopes for peace in the region. “Ethiopia over the course of the last two years moved from a moment of a very high degree of hope and optimism, a vision of transformation, into a total civil war that threatened to destabilize not only the country but also the broader Horn of Africa region,” he says.

A year ago today, the Ethiopian Prime Minister Abiy Ahmed was awarded the Nobel Peace Prize for ending the two-decade “state of war” between Ethiopia and Eritrea, with many hailing a new era of peace in the region.

We turn now to look at how, just one year later, Abiy Ahmed’s military has displaced tens of thousands of civilians in the ongoing military campaign in the northern Tigray region. Thousands have died since Ethiopia declared war on the Tigray People’s Liberation Front more than a month ago. At least one massacre has been reported.

Earlier this week, Ethiopia rejected calls for an independent investigation into the violence, with a top government official saying Ethiopia, quote, “doesn’t need a babysitter.” This comes amidst a communication blackout and as Ethiopia admitted federal troops fired at and detained U.N. workers in the northern Tigray region for attempting to enter areas they say are forbidden.

MICHELLE BACHELET: The situation in Ethiopia is — I think, is really worrying and volatile. And as I had warned, it’s spiraling out of control with appalling impact on civilians. … In the Tigray region itself, fighting is reportedly continuing, in spite of government claims to the contrary. … Elsewhere in Ethiopia, there are numerous reports of ethnic profiling of Tigrayans, including in Addis. We have reports of dismissal from jobs, including in the civil service, harassment of Tigrayan journalists and hate speech against Tigrayans.

AMY GOODMAN: Well, for more, we go to London, where we’re joined by Awol Allo, associate professor at Keele University School of Law in the United Kingdom, global fellow at Princeton University. In 2019, he nominated Abiy Ahmed for the Nobel Peace Prize. His recent piece in Al Jazeera is headlined “How Abiy Ahmed’s Ethiopia-first nationalism led to civil war.”

Welcome to Democracy Now! It’s great to have you with us. You have changed your views in this last year of the man you nominated for the Nobel Peace Prize, who won it last year. Can you talk about the situation? The New York Times headline today on the front page says, “'Finish Him!' Ethiopians on the Run Describe Ethnic Slaughter.” Talk about what’s happening.

AWOL ALLO: Yeah, it’s unfortunate that Ethiopia over the course of the last two years moved from a moment of a very high degree of hope and optimism, a vision of transformation, into a total civil war that threatened to destabilize not only the country but also the broader Horn of Africa region.

I think a number of people who saw the way in which things were changing in Ethiopia when the prime minister came into power had exactly the same views that I had, that this was a very transformational figure who is committed to the ideas of peace, of reconciliation, of justice, because he consistently talked about these ideas. He mobilized them, you know, in literally every speech that he gave in the first two months of coming to office. And the, I think, commitment that he made to strike a deal of some sort with Eritrea to end the war at that time, most of us thought that that was a very bold and revolutionary move that deserved recognition of some sort.

But obviously, there were, I think — with the benefit of the hindsight, we can say that there was a lot that we didn’t know. There was a lot that I think the prime minister himself wasn’t quite clear about in terms of some of the structural challenges and uncertainties facing in the country. And I think the fact that an ideological and political difference between himself and his regime and the Tigray People’s Liberation Front led to this war, I think, shows that it wasn’t clear whether the prime minister actually had as a principle a policy of ruling out war and violence as a means of settling political dispute.

NERMEEN SHAIKH: Awol Allo, could you talk — could you give us some historical context for this conflict? I mean, the TPLF, the Tigray People’s Liberation Front, they dominated for decades the ruling coalition in Ethiopia. They constitute only 6% of the population. What is the source and origin of the conflict between the Abiy central government and the Tigray people?

AWOL ALLO: So, the difference between the two is primarily political, in the sense that there was a struggle over power from the moment when the prime minister came to office. And then that difference, over the course of time, evolved into an ideological difference.

So, when the prime minister came to power on the back of the Oromo protest movement that catapulted him to the office of the prime minister, that meant that the hegemony that the ethnic Tigrayans or TPLF had in Ethiopian politics came to an end. And TPLF wasn’t particularly happy with the way in which the prime minister changed some of the things, removed some officials of TPLF from power, particularly the fact that the federal government wanted some key members of TPLF to be held accountable for crimes of the past. So, those political differences over the course of time evolved into an ideological difference.

And this is something that most of us didn’t know quite clearly, in the sense that the prime minister, when he came to power, he seemed to be someone who believed in the kind of multinational federal arrangements that existed at the time in the country, which was a kind of affirmative action system put into place to redress the inequities of the past. But as time progressed, as he consolidated more and more power, he signaled an intention to centralize power, to move towards a more unitary kind of system, where regional governments, regional states, would have less and less authority compared to the center.

Now, TPLF, having been pushed from the center and now at the regional level, they wanted regional autonomy. So, the fact their regional autonomy is threatened gave the TPLF an ideological kind of path, in terms of taking on the federal government, because that is something that is supported by the vast majority of Ethiopia’s people in the south, particularly the Oromos. So, that is where the conflict between the two took on an ideological form.

And then, over the course of time, the prime minister dissolved the then-ruling coalition, creating his own party. The coalition that he dissolved is a coalition that is constituted of four ethnic-based parties. The party that he established in place of that coalition is what — you may call it pan-Ethiopian party, that does not have an ethnic distinction within it. But it’s the party, at the same time, that is incompatible with some of the predominant mode of political organizing and mobilization that existed in the country, so so many people raised questions as to the viability of that kind of structure, at least especially its ability to win a democratic election. So, when the prime minister established that new party, TPLF refused to join that party, and then the prime minister removed a few individuals who were part of his Cabinet from TPLF from the Cabinet.

NERMEEN SHAIKH: And, Awol, right now, of course, we’re in the midst of the COVID-19 pandemic. Could you talk about what the effect of the ongoing conflict has been on the healthcare system in the Tigray region, and of course the fact that the highest-profile Tigrayan abroad is the present head of the World Health Organization, Dr. Tedros, who has been accused by Ethiopia’s military chief of siding with the Tigray region?

AWOL ALLO: I think, fortunately, the pandemic doesn’t seem to be having the same level of impact that it is having here in the Western part of the world. Maybe because this has to do with data issues, and this is a broader debate as to why the pandemic is not having the same impact in Africa as it is in the Northern Hemisphere, but the pandemic itself is really not something that is discussed much in the public domain.

But the fact that this war has been prosecuted in the midst of a complete information blackout, and the fact that the hospitals and health centers in the Tigray regional states have not received any supplies and have been running out of emergency supplies, I think that is certainly having a considerable impact on the ability of health providers to provide care for those who are badly in need. And that is a view that is being expressed by humanitarian agencies working specifically on healthcare issues, including the ICRC and United Nations —

AMY GOODMAN: Awol Allo, we’re going to have to leave it there, but we will certainly continue to follow the situation. Awol Allo, associate professor at Keele University School of Law, speaking to us from London. This is Democracy Now! I’m Amy Goodman, with Nermeen Shaikh. Be safe. Wear a mask. 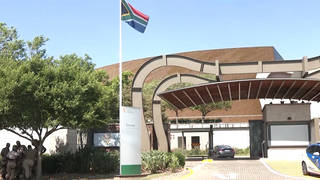