California Is 40% Latinx. In Alex Padilla, It Will Finally Have Its First Latinx Senator

California Secretary of State Alex Padilla has been named by Governor Gavin Newsom to replace Vice President-elect Kamala Harris in the U.S. Senate, making history as the first Latinx senator to represent the state. Padilla was first elected to public office at 26, when he joined the Los Angeles City Council, and went on to serve two terms in the state Senate, followed by two terms as the state’s secretary of state. “This is really a reflection of the historic importance of Latinos,” says Fernando Guerra, professor of political science at Loyola Marymount University. He is also the director of the Center for the Study of Los Angeles.

StoryAug 13, 2020Was Kamala Harris a Progressive Prosecutor? A Look at Her Time as a DA & California Attorney General

California Governor Gavin Newsom has appointed California’s Secretary of State Alex Padilla to replace Vice President-elect Kamala Harris in the U.S. Senate. Padilla will make history as the first Latinx senator to represent California, a state with a population that’s 40% Latinx. He was first elected to public office at 26 years old when he joined the Los Angeles City Council. He went on to serve two terms in the state Senate, followed by two terms as the state’s secretary of state. Alex Padilla is the son of Mexican immigrants. In a video posted by Governor Newsom to Twitter, Padilla talked about how his family’s background has shaped his political work.

SECRETARY OF STATE ALEX PADILLA: I can’t tell you how many pancakes my dad flipped or eggs he scrambled trying to provide for us, or the many, many years of my mom cleaning houses, doing the same thing. It’s why I try so hard to make sure that our democracy is as inclusive in California as we built. And it’s a hell of an important perspective to bring to Washington.

AMY GOODMAN: Alex Padilla is a close ally of Governor Gavin Newsom. He has not taken a public stance on popular progressive issues such as Medicare for All, the Green New Deal, abolishing ICE — that’s Immigration and Customs Enforcement.

For more on his appointment, we go to Los Angeles, where we’re joined by Fernando Guerra. He’s a professor of political science at Loyola Marymount University, where he’s also director of the Center for the Study of Los Angeles.

We welcome you to Democracy Now!, Professor Guerra. It’s great to have you back after a number of years. Can you start off by talking about the significance of this appointment and who Alex Padilla is, someone you’ve known for many, many years?

FERNANDO GUERRA: Well, obviously, the significance is very historic and symbolic that Latinos now have this position. There’s been tremendous amount of Latino political mobilization, and you’ve seen Latino mayors, like Antonio Villaraigosa; lieutenant governor; secretary of state, like Alex Padilla. You’ve seen Latinos be the head of the Legislature as speaker or as a president pro tem of the Senate. Really, the only two positions that Latinos haven’t gained in modern times is the U.S. Senate, which they’ve never held in California, and governor. There was a Latino governor back in the 1870s. But this is really a reflection of the historic importance of Latinos.

Also politically, you know, we think about Latinos are 40% of the population, and they’re also a significant number of the electorate. It is because of Latino political mobilization that California is deeply blue. Without that Latino mobilization, California would be purple, and maybe even red, and would change the whole dynamics of national politics. You know, I remind people that for many presidential elections, Republicans always won California. It wasn’t until 1992 that Democrats started winning, and barely winning, because of — we all know the Ross Perot factor there. But after that, it really depended on the Latino vote. And the Latino vote is the backbone of California being Democratic, which becomes the backbone of the Democrats having a chance in the Electoral College. And so, it’s a historic significance, but also political significance.

JUAN GONZÁLEZ: And, Professor Guerra, Alex Padilla, from what I can tell, is part of this whole sort of generation of key Latino leaders in California — and I include in that Antonio Villaraigosa; Gil Cedillo, the city councilman from L.A.; Xavier Becerra; Kevin de León — who all came, sort of, of age in the fight against Proposition 187 in the mid-'90s and really began to exercise their leadership. But he's not necessarily one of the most progressive of this group. Could you talk about his sort of political leanings?

FERNANDO GUERRA: Sure. You are right, and it’s a great point. Alex Padilla is part of the original resistance to the Republican anti-immigrant policies of the early 1990s. Many of your viewers remember, in 1994, there was a proposition in California, Proposition 187, which was anti-immigrant, anti-Latino. Out of that resistance came people like Kevin de León, Gil Cedillo, Fabian Núñez and Alex Padilla. At that time, Alex Padilla was a young 20-year-old who had just graduated from MIT with an engineering degree, and he had started his career in engineering and decided to get involved in the public sector. And he grows out of 1994, as do a ton of progressive Latinos.

But you’re right in terms of his politics. He is much more moderate. He is not a progressive in the same sense that an AOC or someone like that. Now, he will not be against the New Green Deal. He will not be against abolishing ICE. But I don’t think he will be in the forefront of those issues. I think the most important issues to him are going to be, yes, immigrant rights, yes, equity in economics and education, and, most importantly, voting rights, because that is his one area of expertise.

JUAN GONZÁLEZ: And in terms of — there was a whole lot of jockeying within the political forces in California on Gavin Newsom. There were those who wanted an African American woman, either Barbara Lee or Karen Bass, to replace Kamala Harris. What’s your sense of how Gavin Newsom dealt with those competing pressures on him?

At the end of the day, he understood the historic significance for Latinos. He also had other variables, number one, that Alex Padilla has been a strong ally of the governor for many years. Not only did he endorse him for governor in 2018, Alex Padilla actually endorsed Newsom for governor in 2010, when Newsom was thinking about running against Jerry Brown. Also, you know, they share a lot of the same perspective.

In addition, he also thinks that Alex Padilla can hold the seat in 2022. You don’t want, as a governor, to appoint somebody, and then they quickly lose the seat. He’s held statewide office before, and he’ll have a good shot at staying in that seat in '22. He'll definitely have the [inaudible]. He’ll have [inaudible]. He’ll probably have Vice President Kamala Harris’s endorsement. Now, he is vulnerable to a progressive candidate, like Congressman [Ro Khanna], someone like that, and so he has to be careful. But again, he will be a strong ally of Biden. He will be very much in the liberal Democrat, but don’t expect him to be the leader of progressives.

AMY GOODMAN: So, to replace Alex Padilla as California secretary of state, Gavin Newsom has named state Assemblywoman Shirley Weber. If confirmed, she would become the first Black secretary of state in California’s history. If you can comment on this, and what this means for the landscape of the Senate to have a — if you wouldn’t say progressive, would you say liberal Democratic Senator Alex Padilla —

AMY GOODMAN: — when you look at the other Latinx senators, from Cruz to Rubio to Menendez?

FERNANDO GUERRA: Yeah. And so, yes, he’s going to be a moderate. He’s going to be a lot more liberal than the Latino U.S. senators that exist. You have two Cubans, in Cruz and Rubio, who are also Republican. But you have now four Democrats — Menendez and in Nevada and a new one in Luján in New Mexico. He will, I think, be more progressive than any of those.

AMY GOODMAN: Well, I want to thank you, Fernando Guerra. We’ll be getting back in touch with you, professor of political science at Loyola Marymount University, director of the Center for the Study of Los Angeles.

That does it for our show. On [Thursday], tune in to our documentary Four Days in Western Sahara; on Friday, our interview with the late John le Carré. Remember, wearing a mask is an act of love. I’m Amy Goodman, with Juan González. 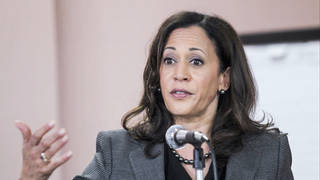