“This Is How Black People Get Killed”: Dr. Susan Moore Dies of COVID After Decrying Racist Care

As the United States reports record deaths and hospitalizations from COVID-19 in the final days of 2020, we look at how the pandemic that ravaged the country this year has shone a stark new light on racism in medical care. In a viral video recorded by Black physician Dr. Susan Moore, she describes racist treatment by medical staff at a hospital in Indianapolis and says they did not respond to her pleas for care, despite being in intense pain and being a doctor herself. In the video, Dr. Moore says she had to beg to receive pain medication and the antiviral drug remdesivir, and accuses a doctor at Indiana University Health North Hospital of ignoring her pleas because she was Black. “I put forth, and I maintain: If I was white, I wouldn’t have to go through that,” she says. Dr. Moore died December 20, just over two weeks after she posted the video. She was 54 years old.

AMY GOODMAN: As the United States reports world record deaths and hospitalizations from COVID-19 in the final days of 2020, we look at how the pandemic that’s ravaged the country this year has shone stark new light on racism in medical care.

We begin with a now-viral video recorded by Black physician Dr. Susan Moore and posted to her Facebook earlier this month, in which she describes racist treatment by medical staff at a hospital in Indianapolis who did not respond to her pleas for care despite being in intense pain and being a doctor herself. Dr. Moore says she had to beg to receive the antiviral drug remdesivir and pain medication, and accuses a doctor at Indiana University Health North Hospital of ignoring her pleas because she was Black.

This is Dr. Susan Moore, as she summoned the energy to speak from her hospital bed, days before she would die. She had an oxygen tube in her nose.

DR. SUSAN MOORE: At that time I had only received two treatments of the remdesivir. He says, “Ah, you don’t need it. You’re not even short of breath.” I said, “Yes, I am.” Then he went on to say, “You don’t qualify.” I must have, because I’ve gotten two treatments.

And then he further stated, “You should just go home right now. And I don’t feel comfortable giving you any more narcotics.” I was in so much pain from my neck. My neck hurt so bad. I was crushed. He made me feel like I was a drug addict, and he knew I was a physician. I don’t take narcotics. I was hurting.

Well, next thing I know, I’m getting a stat CT of my neck with and without contrast. The CT went down a little bit into my lungs, and you can see new pulmonary infiltrates, new lymphadenopathy all throughout my neck. And all of a sudden, “Yes, we will treat your pain.” You have to show proof that you have something wrong with you in order for you to get the medicine. I put forth, and I maintain: If I was white, I wouldn’t have to go through that. …

The other thing that that white doctor, Bannec, said was that if I stayed, that he would send me home Saturday at 10 p.m., in the dark. Who does that? On a week — who does that? … This is how Black people get killed, when you send them home, and they don’t know how to fight for themselves. I had to talk to somebody, maybe the media — somebody — to let people know how I’m being treated up in this place.

And he gladly told me, “I know you’re a doctor.” And he didn’t want the Black doctor to have no medicine, nothing, and then had the nerve to say it’s because of him, the nurse, that I got the medicine. “Really? Because of you? No. How about because I had that stat CT of my neck, where it showed all of that lymphadenopathy and infiltrates? Yeah, you didn’t know about that? You didn’t get that in the report?” That’s what I said. Mm-hmm. Mm-hmm. To being Black up in here, this is what happens.

AMY GOODMAN: Dr. Susan Moore died due to complications from COVID-19 on December 20th, just over two weeks after she recorded this video and posted it to her Facebook page. She was 52 years old. Her 19-year-old son Henry Muhammed is now left to care for her parents, who are both suffering from dementia.

The president and CEO of Indiana University Health issued a statement in response to her death, saying the technical aspects of the treatment she received, quote, “may not have shown the level of compassion and respect we strive for in understanding what matters most to patients,” unquote.

Dr. Moore’s chilling message has been compared to the video of George Floyd begging for his life as he was killed by Minneapolis police.

When we come back, we’ll speak to two leading Black women doctors fighting racial disparities in healthcare. They co-wrote a piece in The Washington Post titled “Say her name: Dr. Susan Moore.” Stay with us. 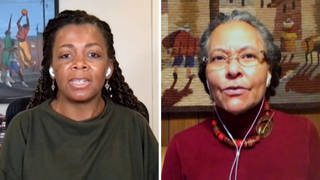