Puerto Rico’s financial control board has struck a deal with bondholders to shed about $24 billion from its general obligation debt. The deal announced Sunday will cut the island’s outstanding general obligation debt from $35 billion to about $11 billion; however, the island would have to pay about $3.8 billion upfront. The agreement will still need to be approved by Puerto Rico’s Legislature. Puerto Rico’s financial control board filed for bankruptcy in 2017 to attempt to restructure $129 billion in debt. The board, which is often referred to as “La Junta,” is an unelected board that runs much of Puerto Rico’s economic affairs and has for years been plagued by corruption allegations. We speak with Democracy Now! co-host Juan González.

AMY GOODMAN: Juan, before we begin with our top story, can you talk about what’s happened in Puerto Rico with the issue of the debt?

JUAN GONZÁLEZ: Yeah, Amy. This is interesting. I’m reading the articles that have come out in the last couple of days about this, and it’s being portrayed as a victory for Puerto Rico in lowering its debt. But what I read of the actual details of the plan is quite the opposite. The island — you cannot pay back debt for which you don’t have money to pay. So the entire debt of $70 billion has been questionable. And, in fact, the control board had offered these bondholders only about 29 to 30% on the dollar. Now they’re getting, with this deal, a much better deal from the financial control board. This is actually a victory for some of the bondholders, especially the vulture funds, because the control board had actually said that it believed that at least $6 billion, the most recent debt of Puerto Puerto, was actually illegally issued. And that’s the money that the vulture funds came in and the hedge funds grabbed in 2012, 2014. Now they’re going to get money back. And, in fact, Puerto Rico has to not only pay $11 billion over 20 years, but it’s got to put up $3.8 billion upfront. In other words, as soon as you sign the deal, you’ve got to give the bondholders $3.8 billion in cash. So, the vulture funds are now making out with this.

AMY GOODMAN: And explain what vulture funds are.

JUAN GONZÁLEZ: The vulture funds are the ones who came in and swooped up debt at the very end, in the last few years, when Puerto Rico really was issuing debt that everyone knew it could never pay. And the vulture funds came in, and as the value of the bonds dropped dramatically, they scooped up the debt at very low prices. So, I think that — similarly to what they did in Argentina and Greece and other countries that went into financial collapse. So, it seems to me that this new settlement — and again, it’s only a settlement for $35 billion of debt. There’s still another $35 billion in bondholders and another $50 billion that’s owed to the pension funds that still has to be resolved. This is a win, it seems to me, not only for the bondholders, but specifically for the vulture funds. And the Legislature of Puerto Rico still has to vote on this, and we’ll see what happens. But those who portray this as a victory for Puerto Rico are not really paying attention to the details of the agreement.

AMY GOODMAN: And, of course, we’ll continue to cover this in the days to come. 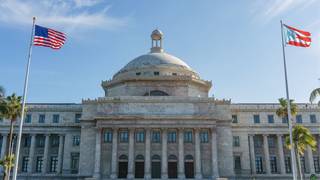