Europe is the epicenter of coronavirus, and Spain now has the second most cases in Europe, with more than 2,000 new cases in 24 hours and the number of deaths doubled. We’ll go to Madrid for an update, where more than half of the country’s cases have been reported. This comes as the Spanish government announced it is nationalizing hospitals and private healthcare companies to better manage the pandemic. We are joined by María Carrión, a freelance journalist and former Democracy Now! producer who is also executive director of FiSahara and co-founder of Nomads HRC, which focus on human rights in Western Sahara.

AMY GOODMAN: We begin today’s show in Spain, which is now the second European country to impose a nationwide lockdown, after 2,000 new coronavirus cases were confirmed in the last 24 hours and the number of deaths doubled. Spain now has the second most cases in Europe after Italy, the fourth highest number worldwide, with more than 11,000 infections and nearly 500 deaths. Spain’s Interior Minister Fernando Grande-Marlaska announced the country was shutting down to slow the spread of coronavirus.

FERNANDO GRANDE-MARLASKA: [translated] From 0100 GMT this evening and until the declaration of the state of emergency is concluded, only Spanish citizens, residents in Spain, cross-border workers and those who prove force majeure or situation of extreme poverty will be allowed to enter national territory by land.

AMY GOODMAN: As the European Union prepares to vote on a proposal to shut all external borders and impose a 30-day continent-wide foreign travel ban, Portugal has already suspended all passenger air and rail traffic with neighboring Spain until April 15th. At the border checkpoints, Spain is now allowing only Spaniards, residents of Spain, cross-border workers and diplomats to enter the country.

AMY GOODMAN: This comes as the Spanish government announced it’s nationalizing hospitals and private healthcare companies to better manage the pandemic. Over the weekend, the Spanish people came outside to cheer medical workers in the streets as the country prepared to shut down. And the Spanish government has just announced a moratorium on mortgage payments and guarantee that basic services — that’s water, gas, electricity — will not be shut off for nonpayment during the crisis.

María, it’s great to have you with us. I talked to you just after the shutdown of your country. Why don’t you just take us through it? We only have a few minutes. But what happened this weekend, after you had last weekend, International Women’s Day, tens of thousands of women marching in the streets? And then, this past Sunday, tell us what the government did.

MARÍA CARRIÓN: Well, the government of Spain decreed a state of emergency. And it’s not the ordinary state of emergency for natural disasters. It goes beyond. It gives the government, the central government, extraordinary powers. It has taken control of basically police, health facilities and both public and private initiatives. It has taken control of all of that in order to manage the crisis. So, as you said in the lede, that includes a temporary nationalization of the private healthcare sector.

We are now confined to our homes. There’s just a few exceptions. And it’s what’s happening basically in every country that’s shutting down. So we’re allowed to go get basic things like food, to go take care of dependents, to go — we can go to our jobs if our jobs cannot be contained inside homes and we cannot work remotely. You can obviously go to the drugstore, the pharmacy, and you can also go to the doctor if it’s very important. People have actually cleared the streets. Spain is now a ghost country, in a sense. You hardly see anyone on the street unless they’re going to their jobs. The weekend was especially illustrative of this, because most people were home anyway. On Monday, yesterday, you saw a few more people out in the streets and on the trains commuting to work. But the streets have definitely cleared out.

Four ministries are now in charge of managing the crisis: the Health Ministry, which is basically appropriating private facilities, as well, to manage — and resources, to manage the crisis; the Interior Ministry, which is kind of like homeland security and the FBI in the United States, now controlling all police forces, including autonomous regional police forces in the Basque Country and in Catalonia; the Defense Ministry, which has put basically the military installations and personnel at the disposal of central government for this; and the Transportation Ministry, which handles public transportation and decides how much of it shuts down, and also highways and roads, that obviously have to be managed, as well, because most of us cannot go anywhere.

AMY GOODMAN: So, María, talk about —

MARÍA CARRIÓN: So, what does this mean? It means that —

MARÍA CARRIÓN: Well, yes. Basically, Pedro Sánchez’s wife has tested positive, and so he’s in quarantine. Pablo Iglesias is one of the three vice presidents of the country, and he belongs to the Podemos, Unidas Podemos party. It’s a coalition government, so it’s Socialist and Unidas Podemos, which is the party that was born out of the Indignados movement after the financial crisis. So, Pablo Iglesias’ partner, who’s also a minister, minister of equality, has tested positive. And also people in — two regional leaders, Quim Torra of Catalonia and the president of Madrid, Isabel Ayuso, have tested positive and are in quarantine, as well. A lot of these women actually were at the feminist march of last — of almost two weeks ago, on March 8th. We don’t know, of course, if that was related. So, yes, there are a lot of people in leadership who are in quarantine.

And in fact, there’s right now an ongoing Cabinet meeting, an urgent Cabinet meeting, to determine the economic, the fiscal measures that will be taken, the way that financially they’re going to be supporting families and businesses and so on, and is taking place remotely to protect all of the Cabinet ministers from getting infected. And this is —

AMY GOODMAN: And the head of the conservative party, the Vox party, María?

MARÍA CARRIÓN: Yes. Both the head and his deputy were at this huge gathering, party gathering. This is Vox, the extreme right-wing party that won about 50 seats in parliament in Spain in the last elections. And they’re very anti-immigrant and have been — they’re on record saying, “We have to keep immigrants out because they bring epidemics into the country.” Now they’re both infected. This is Santiago Abascal and Javier —

AMY GOODMAN: And isn’t it true that one of them was at CPAC in the United States, the Conservative Political Action —

AMY GOODMAN: Oh, was in Washington.

MARÍA CARRIÓN: Yes, yes, and then came back and was tested positive. So, yes, a lot of people in leadership and even in these parties who claim that it’s immigrants bringing in viruses are now having to self-quarantine.

And really, today, the most important thing that’s happening, because the first round of measures — this decree happened over the weekend, but today is where everybody is waiting to hear exactly what the government is going to do to help people whose lives have shut down, who have been temporarily laid off or fired from their jobs, who don’t know how they’re going to be paying their mortgages. They don’t know how they’re going to be paying their rent. Basically, what you just announced, the moratorium on mortgages, just is like five minutes ago was announced, but there’s a whole round of measures that they need to basically agree upon. This is a coalition government, and it’s their first enormous test of unity, because Podemos, of course, is to the left, and they are really pressing for a more generous package for working people especially. We’re all remembering the 2008 financial crisis and how banks were bailed out but people were not. And we were just recovering from that in terms of, you know, especially the most vulnerable people, and especially —

AMY GOODMAN: María Carrión, we’re going to have to leave it there, and most importantly to talk about the most vulnerable in Spain and throughout the world, which will bring us to our next segment, where we’re going to go into the San Quentin prison. The U.S. has the largest prison population proportionately in the world. María Carrión, former Democracy Now! producer, now living in Madrid, Spain, where she is a freelance journalist and head of FiSahara. I’m Amy Goodman. We’ll be back in a sec.

AMY GOODMAN: Spaniards from their balconies and homes while on lockdown.

Inside Prison Amid Coronavirus Pandemic: Incarcerated Journalist Says Millions Behind Bars at Risk 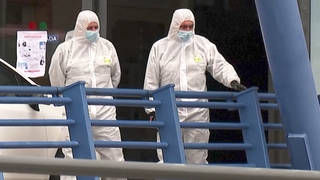