We go to Madrid, Spain, one of the epicenters of the pandemic in Europe, where health workers account for nearly 14% of the country’s infections. Many face limited availability of protective equipment. So many people have died that Madrid’s municipal funeral home has stopped collecting bodies. A large ice rink is now being used as a makeshift morgue, and the government plans to extend the state of emergency by another 15 days in order to stop the spread of the coronavirus. “If Madrid was a country, it would actually be fifth in terms of death rate in the entire world,” says María Carrión, journalist and former Democracy Now! news producer.

AMY GOODMAN: We turn now to Spain, one of the epicenters of the pandemic in Europe, with over 47,000 confirmed cases and nearly 3,500 deaths — the second-highest number in the world after Italy. The number of new infections in Spain has multiplied at a rate of 20% in the last 24 hours. Health workers account for nearly 14% of Spain’s infections. Many face limited availability of protective equipment. So many people have died that Madrid’s municipal funeral home has stopped collecting bodies. A large ice skating rink is now being used as a makeshift morgue. Not far from the rink, the venue for last year’s U.N. climate summit, the IFEMA, has been converted into a hospital ward with thousands of beds. Spain’s government has opened an investigation after soldiers found unattended bodies in some of the nursing homes the military has been disinfecting. As Spain faces its second week of lockdown, the government plans to extend the state of emergency by another 15 days in order to stop the spread of the coronavirus.

For more, we go to Madrid for an update from María Carrión, former Democracy Now! producer, journalist in Spain, head of FiSahara, a film festival that airs in the Sahrawi refugee camps of Algeria.

It’s great to have you back, María. You’ve been now on lockdown for two weeks with your family in the heart of Madrid, which is the epicenter of the epicenter, Spain, as it’s fast surpassing Italy in its rate of infection. Talk about what’s happening now and what the president is about to announce.

MARÍA CARRIÓN: Well, as you mentioned, this is ground zero in Spain for number of deaths and infections. We have over 1,500 deaths in Madrid. So, if Madrid was a country, it would actually be fifth in terms of death rate in the entire world, between Iran and France.

So, this is day 12 of the lockdown. Everybody seems to be following it, with very few exceptions. Hospitals are beginning to be overrun with cases of coronavirus. The ICU units are at capacity. And we have a scarcity of every kind of material that you can possibly imagine. So this is a repeat of what happened both in China and in Italy. Catalonia, the region of Catalonia, is also hard hit. It now has the highest infection rate, new infection rate, in the country. And as you mentioned, 14% of healthcare workers, at least, have been infected, which has taken out over 5,000 people from giving care. They do not have the protective gear, as I was hearing Sean and Kelley speak. The same thing is happening here, as well. People are having to either recycle their gear or simply just make their own with whatever is lying around at home.

So, today, Parliament is — an empty, almost empty Parliament will be convening, so via online, telematic vote. They will be debating the extension of the state of exception. The president of Spain, Pedro Sánchez, will be speaking and explaining why this needs to be extended. And we’re expecting, of course, for everybody to vote for this measure and keep everyone at home, except for certain workers that can still leave their home.

AMY GOODMAN: And both he and the vice president, Pablo Iglesias of Podemos, both of their partners are COVID-19-positive?

MARÍA CARRIÓN: Their partners are COVID-19-positive, and they have gone in and out of isolation. They have broken their quarantine a few times to attend meetings, but now meetings are all at a distance. There are a lot of politicians infected. We talked about this a few days ago. And, of course, the list is just increasing of politicians in Spain who are either in quarantine, because they’ve been very close to virus infections, or actually have tested positive and either at home or in hospital. Garzón, we still don’t know — Baltasar Garzón, the very renowned judge, we still don’t know if he is positive, but it is a suspected case because he has all the symptoms and was hospitalized for respiratory distress.

The most vulnerable people here, Amy, are the ones that are really of concern. You mentioned the nursing homes where these bodies were found. In the news yesterday, they were interviewing health workers, caregivers in these and other nursing homes. And the director of one of these homes, the Maravillas center in Madrid, was running a fever, sick, but still at work and crying, because she said that she didn’t have backups. She suspected all of her staff was infected, but they could not stop working and caring for the elderly patients, most of which, they feared, were also infected, and some of which had already died. So, this, you know, hearing Sean and Kelley talk about how these are preexisting problems, here, too, nursing homes have been a problem for a long time, understaffed, underfunded. These are publicly financed but privately run facilities where oversight is not very good. And so we’re seeing a result of this: Our elders are dying.

JUAN GONZÁLEZ: María, I wanted to ask you about other vulnerable populations, those in the prisons of Spain, as well as the migrants. There’s a huge migrant population, especially from Northern Africa, in Spain. What’s the situation with migrants who are perhaps in detention or in precarious living situations?

MARÍA CARRIÓN: Some centers are letting some people go, but it’s still a pending issue. There’s not enough being done both in these migrant centers, where people are being held, and also in prisons, jails and prisons in Spain. This is something that has not yet been dealt with.

JUAN GONZÁLEZ: And I wanted to ask you, The New York Times had a very — an amazing article today talking about medical doctors in the United States apparently hoarding potential treatments, especially these drugs chloroquine and [hydroxychloroquine] that President Trump has been touting, that these doctors have been prescribing them all around the country for themselves and their family members, in essence, hoarding them. And now pharmacists are complaining that actually doctors are involved in this. Do you have any examples of health professionals there sort of looking out for themselves rather than their patients?

MARÍA CARRIÓN: Very few, actually. I don’t think people are paying much attention to Trump from here, so those drugs have not been hoarded, that I know of. At the very beginning of the crisis, we did hear about certain doctors hoarding face masks and taking them out. There was one doctor who took all of the face masks in the hospital and took them to his village and gave them to his neighbors. But that’s not generally the case, or at least it’s not being reported on.

AMY GOODMAN: And, María, if you could talk about the IFEMA? We were just with you, working at the convention center, which has now been turned into a massive hospital — ironically, the place where the U.N. climate summit was, and we’ve been dealing with this issue of the connection of climate crisis to these viruses that we’re seeing increasingly. And also the skating rink, which is very personal for you, being used as a morgue?

MARÍA CARRIÓN: Yes, indeed. IFEMA was converted into what is now Spain’s largest hospital. It has over a thousand beds, including also intensive care units. And it doesn’t just bring in patients, coronavirus patients, who, for the most part, are not the most serious of cases; it also has opened a section for the unhoused. So there’s about 150 beds for people who do not have shelter or are being kicked out of shelters when — in the morning, and they need a place to be and healthcare. So, IFEMA has transformed itself and is now just full of beds, and hundreds of people sleep in one same wing. That’s one thing.

The ice rink is actually a big mall. It’s located close to IFEMA, as you say, but, not only that, very close to my daughters’ school. It is a place where they’ve gone ice skating, where they regularly meet with their friends and have lunch. There’s movie theaters. They have celebrated birthdays. And we, all of a sudden, saw all these hearses enter this place. And so, my older daughter Gabriela said, “I don’t think I could go there again with my friends.”

AMY GOODMAN: María, we’re going to be touching back with you. María Carrión, former Democracy Now! producer living in Madrid, Spain, where she’s a freelance journalist. She has been holed up with her two daughters and her partner for the last two weeks. María runs three kilometers a day in her apartment, and it’s not large. That doesn’t even compare to the man in France who just ran a marathon on his balcony.

This is Democracy Now! When we come back, we go to Puerto Rico to speak with the mayor of San Juan, Carmen Yulín Cruz. Stay with us.

AMY GOODMAN: “The Awakening” by Mike Longo, legendary jazz pianist known for playing with Dizzy Gillespie. He has died at the age of 83. The cause? The coronavirus.

NEXT“People Go Before Money. This Is About Saving Lives,” Says San Juan Mayor on Pandemic in Puerto Rico 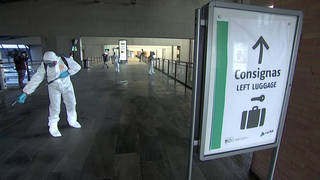