Puerto Rico announced a record $787 million financial package to fight the economic impact of the coronavirus pandemic Monday, as the island’s death toll hits two with 39 cases reported. The pandemic follows a series of devastating earthquakes in Puerto Rico earlier this year and comes as the island continues to deal with fallout from Hurricane Maria, which devastated Puerto Rico’s infrastructure and killed at least 3,000. “One of the things that I think is evident is that with the Trump administration and FEMA, we have to continue to remind them, time and time again, that we are people and that we deserve to be treated with the same sense of justice, urgency and dignity as anybody else,” says our guest, San Juan Mayor Carmen Yulín Cruz.

AMY GOODMAN: This is Democracy Now!, democracynow.org, The War and Peace Report. I’m Amy Goodman, with Juan González, as we head to Puerto Rico, which just announced a record $787 million financial package to fight the economic impact of the pandemic. It’s a bigger package than any U.S. state so far, comes as the island’s death toll hits two, with 51 cases reported. Measures include a three-month moratorium on mortgage payments and other loans; bonuses for essential service providers such as medical staff and police; new tablets and educational tools to improve remote education. Governor Wanda Vázquez said Puerto Rico’s public sector employees will keep getting paid, and small businesses and self-employed workers will receive cash to cope with the crisis. She ordered an island-wide curfew and the closing of nonessential businesses. The pandemic follows a series of devastating earthquakes in Puerto Rico earlier this year and comes as the island continues to deal with the fallout from Hurricane Maria, which devastated Puerto Rico’s infrastructure and killed at least 3,000 people.

For more, we’re joined on the telephone by San Juan Mayor Carmen Yulín Cruz. And co-hosting with us from his home in New Brunswick, New Jersey, is Juan González.

Mayor Cruz, welcome back to Democracy Now! Can you talk about what’s happening now in Puerto Rico? I understand you’ve just opened a drive-by testing center.

MAYOR CARMEN YULÍN CRUZ: Yes, that is correct. First of all, I hope everybody’s safe and staying home as much as you can. It is important to break the cycle down and ensure that those that are most vulnerable are less in the line of fire, so to speak. One of the things that we have been doing since January at the municipality is ensuring that we kept abreast of what was happening. So it gave us a little leeway to purchase masks for our first responders and for anyone that we knew — doctors and nurses — were going to be on the line of fire. It is very important that they have the equipment so that they don’t get sick, and reduce the amount of doctors with coronavirus, because, you know, if you lose your doctors and you lose your nurses and your lab technicians, who’s going to take care of everybody? So we started working on that. As you know and you mentioned, we started a curfew in Puerto Rico. The 9th of March, we started taking measures in San Juan.

On March 13th, we signed a contract with Quest laboratories, that provided us with an amount of tests, the PCR. Those are the testing that it’s a swab that goes in your nostrils, in both nostrils, and it has a 95% effectiveness ratio. So, we needed to have a way that would be fast and quick for people that have symptoms. That’s very important. Amy, people have to have symptoms. Now, there are, of course, vulnerable populations, like people on dialysis or cancer patients or HIV patients, which we are monitoring on a daily basis, from what we called clínica vida, which is — we call it our life clinic, where our HIV adult and pediatrician patients, we are calling them on a daily basis to see if they have any symptoms. So we have established, let’s say, a priority, because we don’t have — as anybody else in the world, we don’t have as many testing kits as we would like them to have. These tests are sent to California. It takes about four days after they get there, which they get during one day. And we are already starting to receive results. In the case of San Juan, only one person has been positive from our testing at the municipality. And, of course, we are sending those numbers to the state and to the CDC. It’s been very effective. We thought we were going to have 25 patients a day, Monday, Tuesday and Wednesday. Monday of this week was our first official day. On the —

AMY GOODMAN: Yulín, we have a bad connection, but I want Juan to get one more question in before we move on. Juan?

JUAN GONZÁLEZ: Yes, Mayor, I wanted to ask you about the federal package that’s being crafted, voted on hopefully today, in Congress. Often the congressional bills either exempt Puerto Rico or reduce payments to Puerto Rico compared to other states. Do you have any sense yet of whether the proposals in the Senate and in this package will include, for instance, the $1,200 payments to every American, $500 for every dependent, and also extended unemployment benefits, whether those will apply to Puerto Rico, as well?

MAYOR CARMEN YULÍN CRUZ: We have been told that they would, and we are currently checking on that. As you know, the bill was approved yesterday. But one of the things that I think is evident is that with the Trump administration and FEMA, we have to continue to remind them, time and time again, that we are people and that we deserve to be treated with the same sense of justice, urgency and dignity as anybody else is. This past weekend, FEMA exempted everybody from the Buy America First, and they did not exempt Puerto Rico, they did not exempt Washington, D.C., and they did not exempt any of the other territories. And frankly, we had to raise hell. And I want to thank Nydia Velázquez for being a very clear voice in that area, and Bennie Thompson, the congressman that chairs the Homeland Security Committee, for being strong voices for the people of Puerto Rico. I just don’t know why one has to continue, here in Puerto Rico and in the states, to tell the Trump administration that people go before money and that this is about saving lives. It is not about politics.

AMY GOODMAN: Carmen Yulín Cruz, we thank you so much for being with us, mayor of San Juan, Puerto Rico. We hope to touch base with you soon with a clearer phone line.

Calls Grow for Sen. Burr to Resign After He Sold $1.7 Million in Stocks & Downplayed COVID-19 Risks

NEXTCalls Grow for Sen. Burr to Resign After He Sold $1.7 Million in Stocks & Downplayed COVID-19 Risks 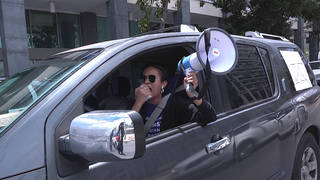