On Thursday in Puerto Rico, activists in dozens of cars held a “Caravan Por La Vida,” or “Caravan for Life,” through San Juan to demand the government provide more COVID-19 tests and sufficient resources for people to stay at home during the pandemic. At least 92 people have died from COVID-19 in Puerto Rico, and last week the island was reporting a testing rate lower than any U.S. state, at an abysmal average of 15 tests a day for every 100,000 people. No one in Puerto Rico has received $1,200 checks from the government, according to San Juan Mayor Carmen Yulín Cruz. Police stopped the caravan and said their sound trucks were illegal. When organizer Giovanni Roberto demanded that police describe the laws they were breaking, he was arrested. Roberto was released later in the night, and his charges of obstruction of justice were dropped. We hear voices from the protest. Special thanks to Democracy Now! correspondent Juan Carlos Dávila.

StoryMar 25, 2020“People Go Before Money. This Is About Saving Lives,” Says San Juan Mayor on Pandemic in Puerto Rico

AMY GOODMAN: This is Democracy Now!, democracynow.org, The Quarantine Report, as we end today’s show in Puerto Rico, where Governor Wanda Vázquez announced Thursday that certain sectors of the economy will reopen Monday as the island begins to ease out of a strict lockdown that began in mid-March. At least 92 people have died from COVID-19 in Puerto Rico. There are more than 1,500 confirmed cases. But as of last week, Puerto Rico was reporting a testing rate lower than any U.S. state, at an abysmal average of 15 tests a day for every 100,000 people.

On Thursday, activists in dozens of cars held a “Caravan for Life” through San Juan to demand the government provide more COVID-19 tests and sufficient resources for people to stay home. Police stopped the caravan. This is some of the voices.

PAOLA APONTE COTTO: [translated] My name is Paola Aponte Cotto. Part of our demands include that unemployment benefits are approved faster. For example, establishing 24/7 phone lines to help the people. With the food stamps, we demand the automatic approval of food stamps. Another demand is to freeze the prices, which have been inflated. And it is unacceptable that this hasn’t been regulated by the consumer agency. Another thing is that right now the message of the private sector is to open the economy, when in Puerto Rico the statistics are not being managed properly in order to know how many people are infected, and while we really need that massive tests are made.

PAOLA APONTE COTTO: [translated] This is what we do: feed people. Feed. Since week number one, we’ve done it with great effort, taking strict safety measures, so that our people may not suffer any needs. Today they arrested one of our comrades in a caravan, very well organized and safe, which sought to show that human lives are first. And people need that the aid reaches them. People need to eat.

PROTESTER 2: [translated] The caravan had coordination. It had security protocols. The stopping points of the caravan were publicly known. And it was the police that decided to block their transit. And beyond it, they put our lives at the risk of contagion.

AMY GOODMAN: That’s voices of the Caravan of Life. And this is San Juan Mayor Carmen Yulín Cruz.

MAYOR CARMEN YULÍN CRUZ: No one in Puerto Rico has received the $1,200 from the federal government. We are having problems with the local $500 that the governor said that it was going to distribute. There’s more than 130,000 unemployment requests that have not been filled. The same thing with people getting food stamps.

AMY GOODMAN: Special thanks to Democracy Now! correspondent Juan Carlos Dávila in Puerto Rico. The organizer of the Caravan for Life, Giovanni Roberto, was arrested by police during the caravan and then later released.

That does it for our broadcast. Democracy Now! is working with as few people on site as possible. The majority of our amazing team is working from home. With Juan González, I’m Amy Goodman. Stay safe. 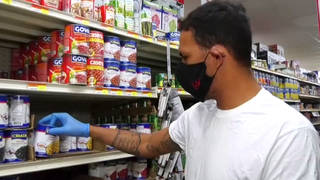