No Longer Downplaying Virus, Trump Says Up to 240,000 Will Die in U.S. from COVID-19
The White House coronavirus task force projected Tuesday between 100,000 and 240,000 people will die of COVID-19 in the United States — but only if the strictest quarantine measures are kept in place. President Donald Trump, who this week extended social distancing guidelines through the end of April, said the worst is yet to come.

President Trump said without efforts to mitigate the spread of coronavirus, up to 2.2 million Americans could die of COVID-19. The grim assessment stood in stark contrast to Trump’s repeated claims in recent weeks that the virus was “under control” and that it would “miraculously” go away by April.

As of today, April 1, the United States has the highest number of COVID-19 cases in the world, with over 188,000 people infected and over 4,000 dead. And the true rate of infection is certain to be far higher due to a critical shortage of test kits.

The Intercept reports that prisoners at the Rikers Island jail are being offered $6 an hour and personal protective equipment if they agree to dig mass graves at a public cemetery on Hart Island. The coronavirus continues to spread rapidly at Rikers, where at least 167 prisoners and 137 staff members have tested positive.

As Confirmed U.S. Cases Top 188,000, Unhoused People Forced to Sleep in Las Vegas Parking Lot
Nationwide, the United States has confirmed over 188,000 cases of COVID-19 and over 4,000 deaths. California hospitalizations have doubled over the past four days, with intensive care cases tripling in that time. California health officials predict the state’s peak of COVID-19 cases will be lower than New York’s because stringent social distancing policies were adopted sooner. In Las Vegas, 500 unhoused people were displaced from a Catholic Charities’ homeless shelter after a resident tested positive for COVID-19. City and county officials have since set up an open-air encampment, painting lines on the pavement of the Cashman Center parking lot to keep unhoused people six feet apart. Meanwhile, thousands of Las Vegas hotel rooms remain empty during the lockdown.

Chicago COVID-19 Nurse Quits over Critical Lack of Personal Protective Equipment
In Chicago, a COVID-19 unit nurse said she resigned Monday after hospital administrators barred her from wearing an N95 protective mask she brought with her to work. The nurse, Imarís Vera, posted this video on social media.

Imarís Vera: “I had my own N95 mask. I told my manager, 'I understand we're short on supplies, but let me protect myself. Let me feel safe. I have family that I have to come home to.’ And the way things are looking, this isn’t going to get any better. America is not prepared, and nurses are not being protected.”

In Austin, Texas, 28 young adults tested positive after a spring break trip to southern Baja California in Mexico, with dozens more under public health investigation. Meanwhile, Russia has promised to deliver a planeload of personal protective equipment and other medical supplies after President Trump placed a call to Vladimir Putin Monday.

Fed Economists: U.S. Unemployment Could Reach Record 32% in June
Federal Reserve economists are warning the coronavirus pandemic could push the U.S. unemployment rate above 32% by the end of June — higher than the peak jobless rate of 25% during the Great Depression. The news comes as thousands of tenants around the country are calling for immediate rent cancellation. Later in the broadcast, we’ll hear from an organizer of today’s April 1 “rent strike,” and we’ll hear from UPS drivers and Amazon employees organizing for safer working conditions amid the pandemic.

Congressional Hispanic Caucus Demands Release of All Jailed Immigrants Amid Pandemic
The Congressional Hispanic Caucus has joined thousands of medical professionals and immigration rights groups in demanding Immigration and Customs Enforcement, ICE, release all prisoners from immigration jails. At least four asylum seekers and five ICE agents have tested positive for COVID-19, raising fears for more than 37,000 immigrants jailed in crowded facilities across the U.S.

In Louisiana, The Intercept reports women jailed at the privately owned South Louisiana ICE Processing Center are terrified that they have been exposed to a person ill with the coronavirus. The women flashed handmade signs to a “video visitation” camera describing an Ecuadorian woman who worked in the kitchen who was given oxygen and carried away on a gurney after presenting symptoms consistent with COVID-19.

Meanwhile, more than 80 immigrant prisoners at the Northwest Detention Center in Tacoma, Washington, continued their hunger strike to protest conditions inside the privately owned facility, demanding their immediate release, reunification with their families and temporary humanitarian visas. On Tuesday, supporters surrounded the immigration jail in a caravan, honking car horns in support of the hunger strikers.

California plans to release 3,500 nonviolent prisoners on parole in the next 60 days to try to reduce prison overcrowding. Although California’s total prison population is about 122,000, this would still be the largest mass release of U.S. prisoners since the pandemic began.

Captain Calls for Evacuation of Infected U.S. Aircraft Carrier: “Sailors Do Not Need to Die”
In Guam, the captain of the USS Theodore Roosevelt pleaded with U.S. Navy officials to allow thousands of sailors to disembark to prevent the spread of the coronavirus aboard the nuclear-powered aircraft carrier, where more than 100 sailors have tested positive. Captain Brett Crozier warned in a letter to the Navy’s Pacific Fleet, “We are not at war. Sailors do not need to die. If we do not act now, we are failing to properly take care of our most trusted asset — our sailors.” CNN reports sailors aboard a second U.S. aircraft carrier, the USS Ronald Reagan, have also tested positive.

Governor Won’t Allow Sickened Cruise Ship Passengers to Be “Dumped” in Florida
In Florida, Republican Governor Ron DeSantis has warned the operators of a pair of stricken cruise ships not to seek refuge in his state, telling Fox News he doesn’t want to “see people dumped in southern Florida right now.” Four people have died on board one of the cruise ships, and dozens more have reported flu-like symptoms. This comes as Governor DeSantis has defied calls to order all residents to remain at home, even though Florida is home to one of the nation’s largest populations of people 65 and older.

Italy Holds Moment of Silence as COVID-19 Deaths Reach 12,000
In Italy, cities nationwide observed a minute of silence at noon Tuesday to remember victims of the coronavirus pandemic. Italy has reported the world’s highest death toll from the disease — with 837 deaths in the last 24 hours alone, bringing the total to over 12,000. With Italy’s hospitals completely overwhelmed, Germany has continued to receive Italian coronavirus patients.

Spain Records Highest COVID-19 Death Toll Yet, as Medical Workers Warn of “Inferno”
Spain has reported its highest daily coronavirus toll, with 849 new deaths over 24 hours. One nurse in Madrid, posting on social media, said the official number of confirmed COVID-19 cases — now over 100,000 — is far lower than the true toll.

Irene GS: “We are completely overflowed. Health workers are exhausted, physically and emotionally, because this is awful. This is an inferno. The numbers that I’m seeing on television are false. Why are they false? Because they are not testing people.”

Asylum Seeker Gets COVID-19 in Greece; Brazilians Continue to Protest from Home
In Greece, an asylum seeker tested positive for COVID-19 after a stay in a crowded refugee camp north of Athens that’s home to 2,500 people.

In Brazil, authorities have set up field hospitals for COVID-19 patients in some of the world’s most storied soccer stadiums. Residents of high-rise apartment buildings in cities like São Paulo and Rio de Janeiro continue to hold nightly protests from their windows and balconies, banging pots and pans and calling for the resignation of far-right President Jair Bolsonaro. Bolsonaro has repeatedly dismissed COVID-19 as a “little flu” and urged Brazilians to get back to work.

Ugandan Police Arrest Homeless LGBTQ Youth for Alleged Quarantine Violation
In Uganda, police arrested at least three Catholic priests after they celebrated Mass on Sunday in violation of a ban on religious gatherings during the pandemic. On the outskirts of the capital Kampala, police raided a shelter for homeless LGBTQ youths, arresting 20 people for allegedly violating quarantine. Those arrested were reportedly beaten and forced to take a “walk of shame” through the village. Uganda LGBTQ campaigners say they were targeted because of their sexual orientation.

Indonesian Drones Spray Clouds of Disinfectant, Raising Fears of Poisonings
Authorities in Indonesia’s second-largest city, Surabaya, have deployed drones to spray clouds of disinfectant in residential neighborhoods, even though health officials warn the chemicals are likely to cause irritation and respiratory problems.

CNN’s Chris Cuomo Tests Positive for COVID-19 as Fox News Fears Lawsuits over Coverage
In media news, Vanity Fair reports that executives at Fox News are worried they could face lawsuits from viewers over the far-right cable network’s misleading coverage of the coronavirus pandemic. For weeks, as the virus spread, Fox News hosts portrayed the pandemic as a hoax designed to damage President Trump’s reelection prospects.

Meanwhile, CNN’s primetime host Chris Cuomo has tested positive for COVID-19. On Tuesday, Cuomo broadcast from his home basement, where he says he’ll remain in isolation until he recovers. Chris Cuomo is the younger brother of New York Governor Andrew Cuomo.

Federal Appeals Court Will Allow Texas Abortion Ban to Remain in Effect for Now
Texas will be allowed to enforce its abortion ban during the coronavirus outbreak after an appeals court judge overturned the ruling of a federal judge who had put a temporary hold on the abortion ban just hours before. Texas’s abortion ban was put in place last week as part of the state’s plan to stem the spread of the coronavirus, claiming abortions are “non-essential” procedures.

Trump Finalizes Rollback of Mileage Standards, Gutting Efforts to Stem Climate Crisis
In environmental news, the Trump administration has finalized its rollback of Obama-era fuel efficiency standards for new U.S. vehicles, in a massive blow against efforts to mitigate the worst effects of the climate crisis. The rollbacks will allow U.S. vehicles to emit some 1 billion more tons of carbon dioxide than previously allowed — equivalent to at least a fifth of annual U.S. emissions.

Secretary of State Mike Pompeo: “Broadly speaking, it would put the elected members of the National Assembly, representing both sides — would create an acceptable council of state to serve as the transitional government until presidential and National Assembly elections could be held, we hope within six to 12 months.”

The proposal would require both President Maduro and Venezuelan opposition leader Juan Guaidó to step aside. A similar strategy was used in 1989 ahead of the U.S. invasion of Panama. Venezuela’s foreign ministry called the proposal “an effort to win geopolitical advantage in the midst of a frightening global pandemic.” The move comes less than a week after the Trump administration indicted Maduro on charges of narcoterrorism and international cocaine trafficking. 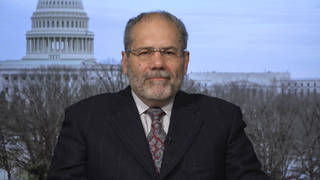