Some 265 million people are expected to face acute hunger as the coronavirus crisis could trigger a second pandemic of hunger. The crisis is projected to disproportionately affect Africa, where there is already widespread hunger. This comes as the World Health Organization estimates the number of COVID-19 cases in Africa could rise to 10 million in the next three to six months. Ten African countries don’t have a single ventilator. “This is an extremely terrifying and frightening moment for the people of Africa. … We were already facing a major food crisis — that was before the coronavirus hit,” says lifelong South African human rights and climate justice activist Kumi Naidoo, former secretary general of Amnesty International and former head of Greenpeace.

AMY GOODMAN: This is Democracy Now! The Quarantine Report. I’m Amy Goodman, with Juan González. Two hundred sixty-five million. That’s the number of people expected to face acute hunger as the coronavirus crisis could trigger a pandemic of hunger, this according to a new United Nations report. The study, released Tuesday, says the number of severely hungry people worldwide will nearly double by the end of this year due to the impact of the spread of COVID-19. On Tuesday, the head of the World Food Programme warned the world will see “multiple famines of biblical proportions” if swift action isn’t taken.

The crisis is projected to disproportionately affect Africa, where there’s already widespread hunger. In South Sudan, a food crisis affected more than 60% of the population last year. Now with the coronavirus, reports of growing desperation are laying bare rampant inequality across the continent. In South Africa, which is under strict lockdown as the African nation with the most reported COVID-19 cases, there’s reportedly a food crisis in Cape Town, as the ongoing lockdown has left informal workers who have lost their livelihoods with little relief. There are also reports of growing panic about hunger in Nigeria. This is a resident of Lagos, Nigeria’s largest city.

SHEHU ISAH DAIYANU: If this coronavirus did not kill people with disability, definitely this order of stay at home will kill people, because, let me tell you, most of my people, they don’t eat.

AMY GOODMAN: This comes as the World Health Organization estimates the number of COVID-19 cases in Africa could rise to 10 million in the next three to six months. The New York Times reports public hospitals in 41 countries across Africa have less than 2,000 ventilators; 10 African countries do not have a single ventilator.

For more, we’re going to London, where we’re joined by Kumi Naidoo, the former secretary general of Amnesty International, former head of Greenpeace. He is a lifelong South African human rights activist and climate justice activist, was the first African to head Greenpeace.

Kumi, welcome back to Democracy Now! As you hear those figures about Africa, and particularly what’s happening in your country of South Africa, where decades ago you were a very well-known anti-apartheid activist, as you started your activism right through to today, talk about what Africa faces.

KUMI NAIDOO: I think this is an extremely terrifying and frightening moment for the people of Africa. It’s important to note that that report that was released by the World Food Programme was already saying to the world that in 2020 we were already facing a major food crisis. That was before the coronavirus hit. Now we’re looking at a situation where the report says that we could be looking at about 300,000 deaths per day over a three-month period.

Now, the reality for Africa is that before even the coronavirus hits, this is what we are dealing with. We’re dealing with healthcare systems that are not strong. We’re dealing with a population that has high levels of vulnerability because of the high levels of HIV/AIDS and tuberculosis and malaria. And we’re looking at economies that are actually really struggling. So, right now I think we are in a very vulnerable state as the African continent, and we hope that international solidarity will be there to help our people get through this very bumpy ride ahead of us.

JUAN GONZÁLEZ: And, Kumi, I’m wondering if you could talk about the impact especially on the most populous nations in Africa — Egypt, Nigeria, Ethiopia and, of course, South Africa, where you are. The question of the increasing globalization and urbanization of the world has led to these giant megacities, even in Africa, where a virus like the coronavirus can spread much more rapidly. Amy mentioned South Sudan, a country of 11 million people. It’s got more vice presidents — five vice presidents — than it has ventilators. It only has four ventilators in the whole country. How can these especially large countries, with these huge urban populations, cope? And what lessons do they have, for instance, in Uganda, which Uganda has a massive public health program that’s already spreading out, trying to identify potential hot spots in their country?

KUMI NAIDOO: Well, I think that the positive news is that the extent of how fast the virus has moved through the African continent has not been as devastating as it was in Europe. So, when we look at the situation in South Africa, for example, the interventions that have been made by the South African government have really been to actually ensure, in the first instance, that we prevent deaths, but to actually buy time for when the pandemic peaks, so that during this time we ramp up on PPE, we ramp up on testing, field hospitals and so on. So that’s what’s been planned. Right now, as we stand, the level of loss of human life on the African continent, compared to Europe or the U.S., for example, is still painful, but, you know, like South Africa, for example, the number is still under a hundred deaths.

So, the preparedness, though, the preparedness of African countries, if we have a situation like what we had in New York in terms of ventilators, equipment, trained personnel and so on, is going to be pretty devastating. So, that’s why I think the efforts now that are being made by individual African countries, but also by the African Union, needs to be generously supported, because for many people in Africa right now, the choice is almost also between, if you want, a pandemic that’s a health pandemic or a hunger pandemic. And as many people are saying, you know, if we don’t get killed by COVID-19, we’ll get killed by hunger.

And so, balancing this is going to be a very tricky act of leadership. But what we hope is that we have a mentality, in terms of how we think, we need to build the continent forward, is not to build back exactly what we had, which shows all these vulnerabilities. We have to learn from this so that we are building in a way that we address the climate crisis, we address inequality, we address maldistribution of budgetary resources and so on.

AMY GOODMAN: And, Kumi Naidoo, the price of oil dropping below zero for the first time ever Monday, the historic collapse due to this historic lack of demand as many in the world are told to shelter at home, what are the implications of this? And we just have a minute or two.

KUMI NAIDOO: Well, the one sort of short-term positive, if you want, impact is that emissions have actually reduced drastically. And the fact that the scale of the impact has been so much and the fact that people have responded in most countries with such urgency and also ensuring that they’re taking the painful actions of being in lockdown — by the way, I’m not in South Africa; I’m locked down in London at the moment, waiting to try and get to South Africa. So, given the fact that people have taken all of these efforts shows that there is a greater capability within the people of our planet to take the big actions that we need to take to address the other challenges that have been with us for so long.

The major problem right now, we have to be conscious that, as we saw with the United States after 9/11 and the PATRIOT Act, that was a special reduction in civil liberties and so on, but we see that even though 9/11 is behind us, many of those elements still remain. One of the concerns we must have is that we want to be very clear that, as citizens, we are supporting what our governments are doing in this moment of crisis, but we also need to ensure that we do not have a situation where, immediately after this, most of those measures remain in place.

So, we have to understand the crisis that we’re in is a multifaceted crisis. It’s a crisis of poverty, hunger, human rights and, of course, climate and environment. And let’s be clear that if we don’t address environmental degradation, the situation that we have now with the spread of viruses, as health professionals have been warning us, will continue. Forests and other ecological assets help prevent the flow of viruses and so on. And right now humanity must take a hard look at ourselves about whether we want to build back after corona exactly what we had, or if we want to build back a more equitable, more just and a more sustainable world.

AMY GOODMAN: Kumi Naidoo, we want to thank you for being with us, former secretary general of Amnesty International, previously the head of Greenpeace, lifelong South African human rights and climate justice activist, on this 50th anniversary of Earth Day special in the midst of the pandemic.

NEXTGreta Thunberg: Climate Activists Have Not Lost Hope Amid Pandemic. We’re Changing How We Organize. 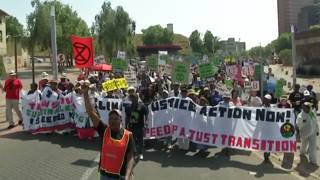