In Seattle, the fight to demilitarize and defund the police continues as the King County Labor Council voted to expel the Seattle police union Wednesday, following weeks of protest. Seattle police sparked outrage for responding to massive protests against police brutality by using pepper spray, tear gas and flashbangs on demonstrators and reporters. Activists then formed an autonomous zone in response to the police department’s abandonment of a precinct building. On Wednesday, President Trump threatened to send troops into Seattle to dismantle the community-run Capitol Hill Occupied Protest, which extends over several city blocks. Seattle socialist Councilmember Kshama Sawant calls the threat of military intervention “absolutely horrific” and says it “shows that Donald Trump is a coward and movements work.”

StoryMay 07, 2021Richard Wright’s Novel About Racist Police Violence Was Rejected in 1941; It Has Just Been Published

AMY GOODMAN: This is Democracy Now! I’m Amy Goodman, with Nermeen Shaikh, as we turn to the fight to demilitarize and defund the police in Seattle, where the King County Labor Council has just voted to expel the Seattle police union. And on Monday, Seattle’s City Council voted unanimously to ban police use of tear gas and chokeholds. This comes after weeks of protests in which Seattle police sparked outrage for using pepper spray, tear gas, flashbang grenades on demonstrators and reporters.

Police have now abandoned Seattle’s Capitol Hill precinct, which has been taken over by activists who set up the CHAZ. That’s the Capitol Hill Autonomous Zone. It’s now called the Capitol Hill Organized Protest, or the CHOP. On Fox News Wednesday night, President Trump responded by calling for a crackdown on Seattle.

PRESIDENT DONALD TRUMP: These people that are taking over this incredible piece of real estate are obviously very good at real estate, maybe better than I was, because they paid nothing. They just took it over. And the police are somehow told not to be there. I’m sure they’d do a good job, if they were told to do a good job. I assume they are properly trained. But we would go in there, if they want us in, and we will take it back very quickly. It should never be allowed to fester like it’s festering right now.

AMY GOODMAN: “We will go in there,” Trump says. And previously he’s talked about sending in the military.

For more, we go to Seattle to speak with the socialist City Councilmember Kshama Sawant, who’s calling for the Capitol Hill Autonomous Zone to remain permanently in community control.

Welcome back to Democracy Now! It’s great to have you with us. First, can you respond to President Trump threatening to call in the troops?

KSHAMA SAWANT: It’s absolutely horrific, the threats that Donald Trump is making to call in the troops, the military, on Seattle. And it’s no surprise to me, though, that he’s doing that, because the successes of the peaceful protest movement in Seattle, and hopefully followed by other cities, is threatening to the right-wing and reactionary regime of Donald Trump. And it also shows that Donald Trump is a coward, and movements work. And so, I think this is an example of how, when we build protest movements, when we build social movements, in unity within the working class, we can win, and we can actually become a real threat to the right wing, which absolutely is the job of our movements.

NERMEEN SHAIKH: And, Kshama, explain. You proposed the legislation to have tear gas and chokeholds banned in Seattle. What did it take to do that? And what kind of response have you received?

KSHAMA SAWANT: Absolutely. And, you know, this is what’s happened. This Monday is absolutely historic. Our movement was able to force a unanimous vote on the Seattle City Council, which is dominated by the Democratic Party establishment, to make Seattle the first city in the nation to win a comprehensive ban on the use and purchase of chemical weapons and other barbaric weapons used against protest movements, so tear gas, as you mentioned, mace and pepper spray, rubber bullets, flashbang grenades, water cannons, ultrasonic weapons. I mean, these are just horrific weapons that are being deployed against peaceful movements. And as you said, Nermeen, we also won a ban against the police use of chokeholds.

And what it took to win was an absolutely determined and united movement on the ground, because despite all the co-opting of the vocabulary of the movement by the Democratic Party establishment saying, “Black Lives Matter,” “We want to dismantle and reimagine the police” — despite all of that, there was a shameful attempt by the Democratic establishment to drive a truck-sized amendment into the bill, basically gutting the bill. And we were able to force them to back down because of the ferocity of the movement, where we said, “Absolutely not. This is the bare minimum you need to do. In fact, you need to pass this strong ban, make Seattle the first city, have other cities follow, make this a national trend, and defund the police by at least 50%.”

AMY GOODMAN: Police union, Kshama Sawant? What have you done about the police union in Seattle?

KSHAMA SAWANT: That’s a very important thing, Amy. I’m so glad you brought this up. This shows the momentum that the movement is having and the tremendous solidarity there is among the working class to fight unitedly against racism and police violence.

So, we won these important, historic bans against chemical weapons and chokeholds on Monday. And then, last night, on Wednesday night — and I speak as a rank-and-file member of the teachers’ union myself — the Martin Luther King County Labor Council, the rank-and-file and progressive unions won a vote to expel Seattle’s police from the Labor Council by saying that there is no place for a racist, anti-poor, anti-homeless police department in the Labor Council, because the labor movement itself was built on the understanding that an injury to one is an injury to all. You cannot build a working-class resistance against capitalism’s exploitation unless the working class comes together against all forms of oppression, like racism and sexual violence. And that is the only basis on which we can all unite against economic inequality, as well.

NERMEEN SHAIKH: Well, Kshama, you’re also calling for the imposition of a tax on Amazon. Could you talk about what you’re asking for and how you think that’s connected to these protests and support for Black Lives Matter?

KSHAMA SAWANT: I think that’s very important. I mean, as Black community members, as the movement itself, that has broken out in the wake of George Floyd’s brutal murder in Minneapolis, the movement is saying, you know, the police have the knee on the neck of the Black community, but the system itself has its knee on the neck of the Black community. And then, furthermore, vast majorities of marginalized communities and the working class, we face police violence, lack of affordable housing. If you look at the epidemic of evictions, economic evictions because of skyrocketing rents in Seattle and in the historically Black neighborhood that we live — that I live in right now, the community has been denuded of its Black population because of skyrocketing rent.

And so, it is crucial that alongside defunding the police by at least 50%, the movement is also demanding that the City Council pass a very strong Amazon tax — that is, tax on big businesses to the tune of at least $500 million every year, so that we can fund a massive expansion of publicly owned, permanently affordable social housing and public sector unionized jobs, because that will actually — that is putting real dollars on the table to address racist gentrification and racism in our city.

And just to give you a sense of how much solidarity there is, in the 15 days of the protests that have broken out in the city, we have collected 15,000 signatures for the tax Amazon ballot initiative, because people are making the link between the need to fight police violence —

AMY GOODMAN: Kshama Sawant, we only have 10 seconds, and we wanted to end with your call to keep the CHAZ permanently in community control. Does that mean the police precinct won’t return? And what does this mean? Fifteen seconds.

KSHAMA SAWANT: Well, I think the police and the establishment will make every attempt to bring the police back. But we are demanding that the East Precinct be taken permanently into community control and be converted to socially constructive purposes, not for the police to oppress people.

AMY GOODMAN: We want to thank you so much for being with us, Kshama Sawant, socialist city councilmember in Seattle. 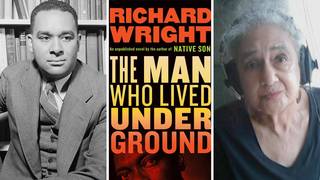