Outbreak at San Quentin: COVID Is Skyrocketing in CA Prisons. Why Haven’t More People Been Released?

As coronavirus rapidly spreads through California’s overcrowded prisons, 400 people have tested positive for the virus at San Quentin State Prison. Advocates and incarcerated people warn conditions behind bars make it nearly impossible to stop the virus once it enters. We speak with Adnan Khan, executive director of Re:Store Justice, an organization that advocates for policy and alternative responses to violence and life sentences. He links inhumane prison conditions to the mass uprising in the streets against systemic racism and state violence. “There are literally millions of people in prison based on the 'credible testimony' and written reports of the very police that we’re seeing brutalize protesters, brutalize and shoot at media and nurses during these peaceful protests,” he says.

AMY GOODMAN: We go now to California. California is the place where COVID-19 is rapidly spreading through the state’s overcrowded prisons. More than 400 people have tested positive at San Quentin State Prison, where the virus has reportedly spread to a number of cell blocks and even death row. The spread began when the California Department of Corrections and Rehabilitation transferred nearly 200 incarcerated people from a prison in Chino with a massive COVID outbreak to San Quentin and another prison. Outbreaks soon began at each prison where people had been transferred. At least 19 incarcerated people in California have now died from COVID-19. This follows months of calls for mass release, as advocates and incarcerated people warn conditions make it nearly impossible to stop the virus once it enters a prison. On Friday, a U.S. district judge in Oakland wiped tears from his face, calling the San Quentin outbreak a “significant failure of policy and planning.”

We welcome you to Democracy Now!, Adnan. I got to see you at San Quentin a few years ago when the Democracy Now! team went there. If you can talk about what’s happened? We had a show just a few months ago, at the beginning of the pandemic, where this was predicted, an outbreak at San Quentin. Explain how this happened.

ADNAN KHAN: It’s very simple. They moved — corrections staff moved a bunch of people from one of the deadliest outbreaks. Sixteen of the 19 deaths in California prisons are recorded in the Chino prison. And 120 people were transferred from that prison into San Quentin, which two weeks ago had zero cases. And that, today, in about a week and a half later, we are over 400 cases. So, when we say about preventable, I cannot say that COVID-19 could not have been prevented in San Quentin, but I do want to say that immediately after that transfer from the most deadliest prison outbreak that we’ve had in California, a huge outbreak occurred in our prison system here in — I’m sorry, specifically in San Quentin.

JUAN GONZÁLEZ: And, Adnan, many of the prisoners in San Quentin are elders. They’re lifers, with life sentences there. And they’re particularly at risk. Could you talk about the San Quentin population compared to other prisons in the California system, and what Governor Newsom, who’s in the news a lot about what he’s doing for the rest of California, doing about the prison situation?

When it comes to the population, the demographic in San Quentin, yes, there are a lot of people who are considered lifers, people who are sentenced to life in prison, and people who have been there for a very, very long time or have been in prison for a very, very long time. So we get this dichotomy a lot, and a lot of this deserving-versus-nondeserving conversation that we should only release nonviolent, low-level or drug offenders. I don’t like using that term, but for context here. And I think that we continue to push away people who actually and factually are the safest population to release, people who have been deemed, quote-unquote, “violent” for the rest of their life, and people who have been in prison since they were teenagers. I was sentenced to 25 years to life as an 18-year-old, and I was considered, by law, a violent person, but my actions proved otherwise.

So, there’s many people in our prison system, particularly San Quentin, that have an elderly population, who have been in prison for decades. And as we keep talking about — when we do talk about reducing the prison population, we only focus on the front door of prisons, but we never focus on the back door of prisons, where there are people who are just jam-packed. And as we talk about mass incarceration, I think it’s a very important topic to discuss static incarceration, where people are stuck in prison, not just the volume of people with mass, but there’s people stuck in prison who don’t have a release valve, don’t have a release date. We need to reorganize that and look at that again in our system.

JUAN GONZÁLEZ: And I wanted to ask you also about those people who do test positive in San Quentin. As I understand it, they’re moved to a place called the Adjustment Center, where typically that was used for solitary confinement. Explain to us more about this Adjustment Center.

ADNAN KHAN: So, the Adjustment Center has always been a place where it is solitary for those in solitary. So, for example, if someone on condemned row — and San Quentin, out of the 34, 35 prisons in California, is the only place that houses people that are sentenced to lethal injection. So, if somebody has a disciplinary infraction on condemned row, the Adjustment Center is the solitary confinement for them.

And so, what has happened is, as COVID had this flare-up in San Quentin over the past two weeks, they have filled the Adjustment Center with COVID patients. However, they only have about a hundred bed spaces there, and they have — they’re already 300 bodies over or 300 people over the amount that they can hold in the Adjustment Center. So, now I’m being told that chapel spaces, gyms and other locations are being used as COVID patient wards, as overflow. But as we’ve seen, within a matter of a week, week and a half, in San Quentin, that lies in the middle of the Bay Area, in Marin, the flare-up is at 400 within a week, and we can expect a flare-up to be even higher, you know, next coming days.

One thing I want to share is, a lot of people in society feel like that what happens inside our prison system will not affect them out here in the real world. And I think that is the biggest mistake that we continue to make. So, if we have, in California, close to 200-plus thousand people that are incarcerated in California and over 67,000 staff that come in and out of these facilities, essentially, every eight hours, it is very difficult for us to believe that COVID-19 and coronavirus will safely contain itself within prison walls. And that’s not the case.

AMY GOODMAN: Adnan, you tweeted earlier this week, “Adjustment Center (AC) in San Quentin is where revolutionary George Jackson’s historic incident took place. He was murdered by corr off right outside of the AC. Now, that is where 200+ #COVID19 outbreak cases are being sent. … [T]he AC [of course] … solitary within solitary confinement.” Can you comment on this, the significance of this?

ADNAN KHAN: You know, the Adjustment Center has always been — well, prisons, in general, have always been seen as the, you know, punishment on society, on Black and Brown people, on people who have already been criminalized just based on the color of their skin. When you go — when you bring that into prison, which we’re talking about systemic oppression, I want to make sure that everyone knows that there’s a tie to what’s happening out here in the world with the uprising and the connection to the prison system.

Really quickly, I want to say that there are literally millions of people in prison based on the, quote-unquote, like, “credible testimony” and written reports of the very police that we’re seeing brutalize protesters, brutalize and shoot at media and nurses during these peaceful protests. And worse, they’re the same officers who are responsible for murders of like George Floyd, Breonna Taylor, Rayshard Brooks and many, many more. And so, there are lots of people in prison based on that.

So, as we’re having these uprisings out here and we follow what happened in history —

ADNAN KHAN: — in history, with the uprising in the '60s or civil rights movement, George Jackson was a revolutionary that — you know, we can — it's hard to describe in a few seconds, but the incident took place in the very Adjustment Center now we’re using —

AMY GOODMAN: We’re going to have to leave it there. Adnan Khan, I want to thank you for being with us, executive director of Re:Store Justice, recently released from San Quentin.

And that does it for our broadcast. A very Happy Birthday to Karen Ranucci! I’m Amy Goodman, with Juan González. Thanks so much for joining us. And stay safe. 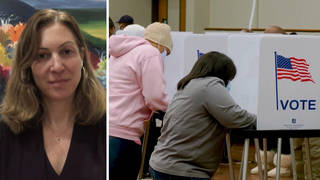