In Racial Justice Victory, Johnson & Johnson to Pay $2B to Women in Asbestos-Laced Baby Powder Suit

Johnson & Johnson has been ordered to pay $2.1 billion to a group of women who developed ovarian cancer after using talcum powder contaminated with asbestos. Johnson & Johnson heavily marketed the powder to African American women despite warnings that the products could cause cancer. Six of the plaintiffs in the Johnson & Johnson case died before the trial started. Five more of the women have died since 2018. We get response from M. Isabelle Chaudry, senior policy manager at the National Women’s Health Network, who says the company must ban the products globally and do more to address the harm it has caused, particularly to communities of color. “They have a history of engaging in racist practices,” she says.

StoryApr 05, 2022A Poor People’s Pandemic: Report Reveals Poor Died from COVID at Twice the Rate of Wealthy in U.S.

AMY GOODMAN: This is Democracy Now! I’m Amy Goodman. This week, a federal court ordered Johnson & Johnson to pay more than $2 billion to a group of women who developed ovarian cancer after using talcum powder contaminated with asbestos. In its ruling, the Eastern District Missouri Court of Appeals said Johnson & Johnson, quote, engaged in conduct that was “outrageous because of evil motive and reckless indifference,” unquote. The appeals court reduced the original verdict amount from 2018, which had been $4.7 billion. But Johnson & Johnson still faces thousands more lawsuits. It recently stopped selling its brand of talcum powder in the United States and Canada, but it continues to sell the products overseas. The lawyer for the plaintiffs told consumers they should throw away any baby powder in their homes.

According to internal memos, Johnson & Johnson knew that asbestos may be in its talc products for at least half a century, 50 years. But as concern grew, Johnson & Johnson targeted its ad campaigns at Black, Latinx and overweight women. In 2007, the year after the International Agency for Research on Cancer determined talc was, quote, “possibly carcinogenic,” Johnson & Johnson planned to market the product to African Americans in, quote, “Under developed geographical areas with hot weather and higher AA population,” unquote.

This is Marvin Salter, the son of Jacqueline Salter-Fox, who sued Johnson & Johnson after being diagnosed with late-stage ovarian cancer in 2013. She didn’t live to see the trial. Her family was awarded $72 million in 2016, a decision which was later overturned. Marvin Salter testified in 2019 before the House Oversight Committee.

MARVIN SALTER: I sincerely believe that Johnson & Johnson took my mother’s life. We believed in the company, and the product specifically. My mother was a true fan. It was a staple in our house and a necessary part of our hygienic routine. It was as natural for her as her brushing her teeth every single day. …

She was diagnosed with the late stage of ovarian cancer in April of 2013. It was a rough time for us, but my mother was the type of woman who never let bad news overtake her joy. She was confident she would beat this disease. … Her spirit was never broken, despite what was happening to her body. She smiled through it all. …

Johnson & Johnson has yet to take ownership for what they have done, and they have yet to take one step to make amends to all of us whose lives have been turned upside down because we trusted in this company and they said their product was safe.

Welcome to Democracy Now!, Isabelle. So, lay out the significance of this more than $2 billion verdict against Johnson & Johnson.

M. ISABELLE CHAUDRY: Thank you for having me, Amy.

So, this case is really significant. The court found that the plaintiffs proved, with convincing clarity, that defendants engaged in outrageous conduct because of an — I quote — “evil motive or reckless indifference.” And so, the court ended up reversing some of the jury’s award, and ultimately the punitive damages to Johnson & Johnson was $715.9 million, and then also $900 million to its subsidiary, Johnson & Johnson Consumer Companies. So this is very significant for consumers who have been fighting against Johnson & Johnson and alleging that their product caused their ovarian cancer.

As well, just last month — yes, in May — the company put out a statement saying that they were going to discontinue selling their baby powder product, their talc-based baby powder product, in the U.S. but continue to sell those same products abroad, which will impact countries like Africa and Brazil.

AMY GOODMAN: So, whole continents, Africa and Brazil. Explain this. And also, I mean, people may be listening, some people, and saying, “Baby powder? So, why is it mainly women who are the victims of this?”

M. ISABELLE CHAUDRY: Well, Johnson & Johnson had engaged, as you mentioned, in practices that specifically targeted women, and they specifically targeted African American women, Latinx women, overweight women. And we know, and Johnson & Johnson knew and studied cultural norms of certain communities and knew that as part of their self-care practices, certain women use their baby powder products.

AMY GOODMAN: For dealing with chafing, also, especially in hot countries, dealing with moisture. So, if you can explain how the asbestos gets into the baby powder, the talcum powder, that Johnson & Johnson has marketed for so long?

M. ISABELLE CHAUDRY: Yes. So, the way that talc is mined, it sometimes is commingled with asbestos. And asbestos is a known carcinogen. The American Cancer Society has said so. There is no safe level of asbestos. And so, when there’s any trace of asbestos in talc, the talc is then dangerous. It can cause cancer. And Johnson & Johnson knew of this for years, going back to the late 1950s. And this is publicly recorded, so we can see through their public documents during litigation that they knew that there were trace amounts of asbestos in those products.

M. ISABELLE CHAUDRY: Yes. So, the company contracted with a North Carolina marketing firm called Segmented Marketing Services, Inc., which specialized in promotions to ethnic consumers. And they distributed $100,000 — 100,000 gift bags containing baby powder and other Johnson & Johnson baby products in African American and Hispanic neighborhoods in Chicago. They also launched a 300,000 radio advertising campaign in half a dozen markets, aiming to reach, as you stated, “curvy Southern women 18 to 49” of age.

AMY GOODMAN: So, if you can talk about the women who brought the lawsuit? Did any survive it? Did they all die?

M. ISABELLE CHAUDRY: OK. So, there were over — upwards of 20ish women. I think it was 22 women and their families brought lawsuits against Johnson & Johnson. And as you stated before, they have thousands of lawsuits against them. Through this process, families have lost loved ones. Women have died of ovarian cancer. And so, this has been a very serious issue that has impacted families, has impacted women, and is going to continue impacting these people if the products are still being sold and marketed, especially abroad. And I understand that their current inventory will still be sold throughout the U.S..

AMY GOODMAN: Throughout the U.S., the current inventory, before they won’t make it again, but they are continuing to make it for other countries? I wanted to ask you about Johnson & Johnson CEO Alex Gorsky issuing a statement in support of Black Lives Matter in response to the global uprising after the police killed George Floyd, Ahmaud Arbery, Breonna Taylor. Can you talk about this statement? He said, “As the CEO of the world’s largest healthcare [company], I must state unequivocally that racism in any form is unacceptable, and that black lives matter.” He went on to pledge to focus on inequity in medical care for communities of color. Your response, Isabelle?

M. ISABELLE CHAUDRY: My response is that the work of equity and justice needs to go beyond mere statements. So, Johnson & Johnson joined a chorus of many companies who have pledged to address racism and, you know, stating Black lives matter, and especially after the recent events, that has led to the uprisings and protests.

And so, based on their own practices, their historic practices of targeting Black and Brown communities, historically marginalized communities, this statement is just not enough. They are a manufacturer that markets and sells products to consumers. These are products that we use on our skin. These are products that impact our health. And so, to specifically target and double down on marketing efforts to historically marginalized communities and to continue to engage in those practices and now continue abroad to places like Africa, as I mentioned, they have —

AMY GOODMAN: Ghana and Kenya in particular, among other places?

M. ISABELLE CHAUDRY: Yeah, Ghana, South Africa, Kenya, and also Brazil holds all three segments of its company. And so, it’s just not enough to put out statements. Their actions need to match the statements, and they have a history of engaging in racist practices.

AMY GOODMAN: So, what are your demands right now? You’re saying that if you go to a store in the United States, you could possibly find this contaminated baby powder. They’re saying they’re discontinuing it after the current inventory is out? And then, in Africa, in Asia, in hot countries in particular, and particularly communities of color?

AMY GOODMAN: How many more lawsuits does Johnson & Johnson face?

M. ISABELLE CHAUDRY: Well, I know, since March, they have had upwards of, I think, 19,000 lawsuits. So, they have a lot of lawsuits against them.

AMY GOODMAN: Well, we will continue to cover them. I want to thank you so much, Isabelle Chaudry, for joining us, senior policy manager for the National Women’s Health Network. 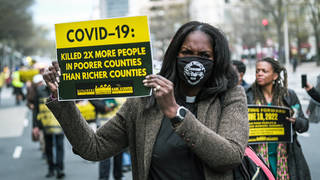