The newly released “Poor People’s Pandemic Report” shows poor people died from COVID at twice the rate of wealthy Americans and that people of color were more likely to die than white populations. “Our country has gotten used to unnecessary death, especially when it’s the death of poor people,” says Rev. Liz Theoharis, co-chair of the Poor People’s Campaign.

As the United States nears 1 million deaths from COVID-19, those living in poor and low-income communities suffer twice as many deaths as wealthier counties. That’s the finding of a new report by the Poor People’s Campaign and economists at the U.N. Sustainable Development Solutions Network.

This is Dr. Sharrelle Barber, director at the Ubuntu Center at Drexel University School of Public Health, announcing the report Monday at the National Press Club in Washington, D.C. Yes, she’s the daughter of the Poor People’s Campaign founder, Bishop William Barber.

SHARRELLE BARBER: This poverty and pandemic report is painful. An invisible airborne virus has proven to us that we are caught up in an inescapable network of mutuality, and has shown us, with vivid detail, the deadly consequences of systemic poverty and systemic racism in our nation. But even more troubling is our inhumane acceptance of mass death.

AMY GOODMAN: The “Poor People’s Pandemic Report” draws on testimony from members of the Poor People’s Campaign. This is Tyrone Gardner and Fred Womack in Mississippi, followed by Jessica Jimenez, a single mother of three who lives with both her parents in the Bronx.

TYRONE GARDNER: I do have a health concern. I have sarcoidosis, which is an autoimmune disease. And so, I was stricken with COVID. My wife, she has lupus. She was also — contracted COVID. And because I don’t have money, it was 17 days before they even told me I had COVID.

FRED WOMACK: Coronavirus hit our family real hard here in Mississippi, especially in the Jackson central area. You know, we went through periods where we lost three or four family members at a time, you know, having four funerals in one day, you know.

JESSICA JIMENEZ: Not being able to pay my rent and bills on time was one of my biggest worries. You know, I was scared not being able to have a home for my children, not having a rent-control apartment, not getting any help to pay bills. And it was either paying my bills or having to spend that money on food and things that were necessary for my children.

AMY GOODMAN: For more, we’re joined by the Reverend Dr. Liz Theoharis, co-chair of the Poor People’s Campaign. She’s joining us from Martinsburg, West Virginia, where they’re launching a protest against Senator Joe Manchin, which we’ll talk about in minute.

Reverend Theoharis, welcome back to Democracy Now! Can you lay out the findings of the “Poor People’s Pandemic Report,” which was released on the 54th anniversary of Dr. Martin Luther King’s assassination in Memphis, Tennessee, where he was fighting for the rights of low-wage sanitation workers?

REV. LIZ THEOHARIS: Well, good morning, Amy, and thanks for having us on today.

We’re not celebrating this report. We’re deeply mourning the fact that — the extent of loss, the gravity of how much death, and how much of it was completely necessary. But indeed, what is shown in this “Poor People’s Pandemic Report” is that, overall in the pandemic, twice the number of poor people from poor counties died from COVID — and in various waves of the pandemic, up to five times the number of people in poor counties — than in richer counties died.

And so, the report is — there’s an interactive map. There’s a storyboard. I really encourage folks to go to PoorPeoplesCampaign.org and check out. There’s many, many findings, but it kind of overlays COVID deaths county by county, looking at about 3,200 counties across the country, and looks at income levels in those counties, look at healthcare coverage in those counties, looks at racial demographics and other demographics in those counties, and clearly shows that after that first wave of when COVID hit in early of 2020, really the mass death and loss has been amongst poor people.

JUAN GONZÁLEZ: And, Reverend Theoharis, why choose West Virginia as the place for this Poor People’s Campaign march, the 23 miles from Harpers Ferry to Martinsburg?

REV. LIZ THEOHARIS: Yes, indeed. So, we’re here. You know, we launched this report yesterday showing how our country has gotten used to unnecessary death, especially when it’s the death of poor people, low-income people. And here in West Virginia, where I am currently, you know, it’s one of the poorest states. There are 710,000 people in the state who are poor and low-income. And yet you have senators in the state who have refused to expand healthcare, expand — you know, raise wages, pass any kind of Build Back Better and extend the child tax credit. And that doesn’t just hurt folks in West Virginia, but it hurts people across the country.

And so, leaders of the West Virginia Poor People’s Campaign and other community leaders decided to organize a march. It’s a moral march on Senator Manchin. We will be marching from Harpers Ferry, from Storer College, where the second meeting of the Niagara Movement and, you know, Du Bois and so many powerful leaders, freedom fighters in our country’s history, met and figured out how do we keep a struggle going. And we’ll march to Martinsburg to Senator Manchin’s offices there. There will be demonstrations at various places, including the coal waste plant where Manchin makes his money off of coal, and, you know, really highlighting the connection between the evils, the interlocking injustices that the Poor People’s Campaign has taken up — you know, poverty and racism and ecological devastation and militarism and this distorted, this false narrative of religious nationalism that kind of covers up these wide and deep injustices that just do not have to be.

You know, people here in West Virginia deeply need and want to lift the load of poverty and to address these issues, and see the connections between environmental issues and health issues, as well as poverty and labor and racism. And yet, the elected officials here are not putting forward the kinds of programs, on a state level or on a national level, to actually address these injustices and make life better for the people.

JUAN GONZÁLEZ: And you and Bishop Barber and other members of the Poor People’s Campaign have called on President Biden to meet at the White House with a delegation of poor and low-wealth people and religious leaders. Certainly at the Democratic convention, when Biden was nominated, a lot of attention was paid to the issues of the poor, but has there been any response from the president about this?

REV. LIZ THEOHARIS: Well, it does seem that the president’s handlers are kind of holding this up. We have gotten every indication that President Biden is interested in meeting. You know, when he addressed the Poor People’s Campaign in the election and after the inauguration, he said that ending poverty would be not just an aspiration but a theory of change.

And so, what the report that we launched yesterday shows is just one more kind of exclamation point on the fact that we need this meeting between poor and low-income people, folks that have been — who have lost loved ones in this pandemic and who are losing loved ones to poverty and racism and the destruction of our environment and militarism, you know, even before, and made worse during this pandemic. And so, indeed, it’s impossible to be able to really hear the pain and come up with the solutions that are at hand, that we do have, without such a meeting. And so we’re calling for that meeting.

And then we’re also organizing for a massive poor people and low-wage workers’ assembly, a moral march on Washington and to the polls, this coming June 18th, where thousands upon thousands of poor and low-income people from all across the country will be in Washington, D.C., making sure that our voices are heard and our agenda is clear, that we can’t keep on letting people die and have lives diminished because of this injustice and because of poverty. In this, the richest country in human history, how is it that we can have half of the U.S. population experiencing some form of poverty, when it just doesn’t have to be?

AMY GOODMAN: Reverend Dr. Liz Theoharis, I want to thank you so much for being with us, joining us from West Virginia, co-chair of the Poor People’s Campaign, also executive director of the Kairos Center at Union Theological Seminary here in New York. We will link to your “Poor People’s Pandemic Report.”

That does it for our show. Democracy Now! is currently accepting for applications for a news producer. Check it out at democracynow.org. I’m Amy Goodman, with Juan González. Stay safe. 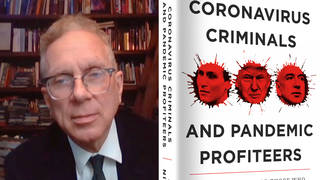