The Supreme Court handed the Trump administration a major victory Thursday when it ruled the government can fast-track deportations of asylum seekers without first allowing them to fight for their cases in front of a judge. The ACLU’s Lee Gelernt argued the case in court on behalf of Tamil asylum seeker Vijayakumar Thuraissigiam. “It’s a very serious decision and will adversely affect many, many asylum seekers,” says Gelernt. “We’re likely to see more people fail their hearings, and now they don’t have a backstop in the federal courts.”

StoryNov 15, 2019“This Is My Home”: Meet the Lead Plaintiff in the Supreme Court Case to Save DACA

AMY GOODMAN: In a major victory for the Trump administration, the Supreme Court ruled Thursday the U.S. government can fast-track deportations of asylum seekers without first allowing them to fight for their case in front of a judge. The 7-to-2 ruling affects the thousands of asylum seekers whose initial credible fear claims are denied by immigration officers in bare-bone proceedings without a lawyer present. The American Civil Liberties Union said the Supreme Court’s ruling, quote, “fails to live up to the Constitution’s bedrock principle that everyone gets their day in court.”

For more, we’re joined by Lee Gelernt, deputy director of the ACLU Immigrants’ Rights Project, attorney for the Sri Lanka asylum seeker who was at the center of the case before the Supreme Court.

We welcome you back, Lee Gelernt, to Democracy Now! First, explain his case, and then what you argued before the Supreme Court and the significance of its ruling.

LEE GELERNT: Yeah. So, he is, as you said, a Sri Lankan asylum seeker. He was — he is Tamil, an ethnic minority in Sri Lanka, historically persecuted. He was abducted by men, blindfolded, brought in a van and beaten senseless. He finally escaped Sri Lanka, got to the U.S. and had what’s called these fast-track or expedited hearings, without an attorney, a very short hearing, where he explained his story.

And the asylum officer believed him but said, “I’m not still going to grant you asylum, because I don’t think you’re legally entitled to it.” And that was notwithstanding him — and the reason the asylum officer said, “I’m not going to grant you asylum,” is, “Well, how can I be sure that it was government forces who beat you?” And that’s what it takes to get asylum. But yet, he had told them he thought he was arrested — used the word “arrested” — which, of course, implies that it’s government officials. He didn’t know exactly who beat him, of course, and he doesn’t have an attorney and didn’t investigate.

But the other thing he pointed out is that he was abducted in a van. And every report you look at about Sri Lanka shows this thing called the white van phenomena, where Tamils are abducted in a white van by government officials. So it was a well-known phenomena. And the asylum officer was charged by law with knowing what happens in each country. And once he heard that this man was abducted in a van, he should have understood that was a prima facie case of asylum. Nonetheless, he said, “I’m not going to grant you asylum.”

So we did what most people would do in that situation, and try and get a judge, a neutral judge, because the asylum officer ultimately is part of the executive branch, to say, “Let me review this.” The administration said, “No, you can’t go to a federal court,” based on a law that was passed, unfortunately, in 1996. We believe the law was unconstitutional, and everyone is supposed have their day in court by virtue of what’s called habeas corpus, which simply means you have your day in court where your liberty is going to be taken away. We prevailed in the court of appeals.

We went to the Supreme Court, and we argued that the denial of your day in court where your liberty is at stake is unconstitutional, and the framers of the Constitution wanted a judicial check on the executive branch and on Congress where someone’s liberty was at stake. Unfortunately, the Supreme Court ruled against us and for the government.

As a practical matter, it’s a very serious decision and will adversely affect many, many asylum seekers, particularly now. I mean, judicial review is always important, but particularly now, where the Trump administration has eviscerated so many of the protections and the asylum hearing itself, that it’s that much more critical to have a backstop of a federal court.

AMY GOODMAN: Lee Gelernt, can you talk about the significance of the justices who voted either way, the 7-to-2 ruling? Elena Kagan and Sonia Sotomayor voted against. Ruth Bader Ginsburg voted with the majority.

LEE GELERNT: Yeah, Ruth Bader Ginsburg, Justice Ginsburg, and Justice Breyer concurred, but on extremely narrow grounds, and said, taking all the specifics of this case, they would — they joined the majority. The majority’s opinion was unfortunately broader.

AMY GOODMAN: And very quickly, this issue of expedited removal was actually not very frequent until the dramatic increase in Central American asylum seekers arriving at the border. So, more specifically, how you are fearing it will affect them?

AMY GOODMAN: And even, of course, though your client was Tamil from Sri Lanka.

LEE GELERNT: Right. And so, I think there is going to be a sort of double whammy here, because judicial review was always going to be important for those cases that failed at the initial stage, but I think what we’re likely to see are more people failing at the initial stage, because as truncated as the hearings were to begin with, the administration has now for three-and-a-half years been trying to take away procedural rights, and even in that initial hearing with the asylum officer, and making it more difficult to get asylum based on things like gender discrimination. And so, we’re likely to see more people fail their hearings, and now they don’t have a backstop in the federal courts. So I think we’re likely to see many more people in fast-track deportations removed.

AMY GOODMAN: Can you also comment quickly on the ACLU lawsuit that you recently brought against the Trump administration ordering — against their order that restricts immigration at the border based on the unprecedented invocation of the Public Health Services Act? You filed on behalf of a 16-year-old Honduran boy?

So I think the stakes are enormous in this case, because if that expulsion order stands and the president is reelected, I suspect that he’s going to end asylum for the whole second term, based on the pretext that it’s too dangerous to allow children asylum seekers in the country.

AMY GOODMAN: And finally, Lee, we often had you on talking about separated children, and I was just wondering if you can give us an update.

AMY GOODMAN: In the midst of this horrific pandemic, how many children do you still believe are separated from their families in the United States?

LEE GELERNT: So, that’s a great question. And unfortunately, the government had only given us part of the names in the beginning. They gave us another 1,500 children late, and only because it was exposed by internal government reports. We are unfortunately still looking for the bulk of those children. And we were going door to door in Central America with our partners looking for those children. And now because of COVID, we can’t do that. So we still do not know how many children are separated. We have yet to find hundreds of those children, many of them under 5 years old.

AMY GOODMAN: And finally, the fate of asylum law in the United States under almost four years of President Trump?

LEE GELERNT: I think it hangs in the balance. I think we are really at that turning point where if our legal challenges don’t succeed and the president is elected, there really won’t be asylum next term. And I think everyone — you know, the border is sort of out of sight, out of mind. People need to look back on history, think about what happened with their ancestors. A lot of people in this country benefited from the United States’ commitment to provide protection after World War II. This would be an unfortunate thing in the United States if all of a sudden we turned our back on the group that needs asylum now, because, sooner or later, different groups need asylum. We really cannot end asylum. But that’s what’s happening if the Trump administration gets its way.

AMY GOODMAN: Lee Gelernt, we want to thank you for being with us, deputy director of the ACLU Immigrants’ Rights Project.

Next up, we look at the growing controversy over the police use of facial recognition technology, as a man in Michigan reveals he was falsely arrested thanks to the flawed technology. Stay with us. 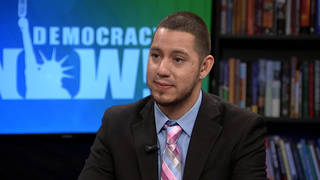 “This Is My Home”: Meet the Lead Plaintiff in the Supreme Court Case to Save DACA