Two environmental activists with the Louisiana Bucket Brigade face up to 15 years in prison for leaving a box of plastic pellets, found on the Texas coast, at the home of an oil and gas lobbyist in December. Advocates say the “terrorizing” felony charges reflect longtime attempts to criminalize environmental activists in Louisiana and come amid a campaign to block Formosa Plastics from building a new plant in St. James Parish, an area known as Cancer Alley. We speak with Anne Rolfes, director of the group Louisiana Bucket Brigade and one of those facing felony charges, and Gregory Manning, activist and pastor of Broadmoor Community Church, who was charged with inciting a riot as he led a peaceful protest along Cancer Alley in October of 2019.

AMY GOODMAN: This is Democracy Now! I’m Amy Goodman, as we head to Louisiana, where two environmental activists face up to 15 years in prison for leaving a box of plastic pollution, found on the Texas coast, at the home of an oil and gas lobbyist in December. Anne Rolfes and Kate McIntosh, members of the Louisiana Bucket Brigade, turned themselves in to the Baton Rouge Police Department Thursday, facing, quote, “terrorizing” felony charges for the action, which was part of a campaign to raise awareness about plastic pollution. They both made $5,000 bail later in the day and were released.

The complaint against the activists claims they meant to cause fear when they left a box filled with plastic pellets, known as nurdles, outside the home of lobbyist Greg Bowser along with a note that read, in part, quote, “These are just some of the billions of nurdles that Formosa Plastics dumped into the coastal waters of the state of Texas,” unquote. The action was part of a campaign to halt plans by Formosa Plastics to build a new plant in St. James Parish in an area known as Cancer Alley. Pam Spees, a lawyer with the Center for Constitutional Rights, who is representing Rolfes and McIntosh, says the charges are meritless and meant to intimidate protesters.

For more on this case and the criminalization of activism in Cancer Alley, we go to New Orleans, where we’re joined by two guests. Anne Rolfes is with us, director of the group Louisiana Bucket Brigade, one of the activists facing the felony charges, and Gregory Manning, pastor of Broadmoor Community Church, part of the Coalition Against Death Alley and the Greater New Orleans Interfaith Climate Coalition. Reverend Manning was charged with inciting a riot as he led a peaceful protest along Cancer Alley in October of 2019.

We welcome you both to Democracy Now! Anne, you just turned yourself in. Explain what you’re being charged with right now, and what it is that you left. What were these plastic pellets?

ANNE ROLFES: Well, the community of St. James, Louisiana, which is a historic Black community, is under threat of destruction by Formosa Plastics. And last December, as our Department of Environmental Quality was considering the permit, at the very same moment, in Texas, a judge found Formosa Plastics guilty of violating the Clean Water Act, and the company settled the largest Clean Water Act fine in U.S. history — $50 million.

So, what we did is we brought the evidence from that case to Louisiana. It certainly seemed relevant. We really couldn’t believe that our state would even contemplate having this facility come into our state, given what had just happened in Texas. And so we thought it was really timely and really urgent to provide this evidence, not only to our state, but also to some of the lobbyists who are gearing up to destroy, again, the Black community of St. James Parish with what would be the largest plastics plant in North America.

AMY GOODMAN: So, what are these plastic pellets, and where did you leave them?

ANNE ROLFES: They’re just little, tiny plastic pieces that they melt into all sorts of useless things like throwaway cutlery and plastic bags that none of us need. And so, we visited the homes of some of the oil and gas and chemical lobbyists and brought them the evidence from Texas. Again, the state was considering, at that very moment, letting this same serial polluter into our state, and we felt that the lobbyists ought to reckon with the fact that they are destroying Black communities, a historic Black community, here in Louisiana. And all for what? For plastics that nobody needs.

AMY GOODMAN: These are felony charges of terrorizing. What do you face?

ANNE ROLFES: Fifteen years in prison. I was put in shackles. My colleague, Gregory Manning, who is on the show today, was pinned to the ground late last year when he protested against the oil and gas and chemical industry. And Sharon Lavigne, who is the president of RISE St. James, the group that’s leading the charge to stop Formosa Plastics, she has been visited repeatedly by sheriff’s deputies. So it’s a long chain of intimidation because of our very successful campaign to stop Formosa. It’s clear that this is nothing more than retaliation.

AMY GOODMAN: Pastor Gregory Manning, you’ve been arrested as you lead protests. They say you’re inciting a riot. Can you talk about St. James Parish and why you’re so deeply concerned, why it’s been called Cancer Alley?

PASTOR GREGORY MANNING: Thank you, Amy. You know, we not only call it Cancer Alley, as it’s been called historically, but we have given it a new name, and that’s Death Alley, because not only is it — has the most — highest rates of cancer than anywhere in the nation, it has the highest rates of all sorts of other diseases, such as autoimmune disease and asthma and respiratory issues.

And these are people who I want to say are the African descendants of slaves. And so, we’re standing with them to say that these folks are being poisoned. They’re literally saying that “We cannot breathe.” They’re crying out for people to notice that these petrochemical industries have moved into this land — over a hundred of these — and that have consistently terrorized them and poisoned them on a daily basis. I’m talking men, women and children. And so, I believe that as clergy, as a pastor, that I cannot sit idly by and watch these people be poisoned and killed ruthlessly by these petrochemical industries and oil and gas industries.

AMY GOODMAN: Pastor Manning, can you talk about Formosa Plastics in the context of environmental racism and the vast racial disparities that your parishioners and people all over the country in Black and Brown communities are facing when it comes to COVID, and how this all comes together now?

PASTOR GREGORY MANNING: I believe that people must understand that this area of St. John and St. James Parish are also experiencing the highest rates of death by coronavirus than anywhere else in the nation. When we look at that, it’s just astonishing that while we see that these chemical industries are continuing to have production, that they’re considered by our legislators to be essential operation.

And Anne and I ask ourselves: Why are these businesses not considered nonessential? Why is it essential to produce plastics and wetsuits and all of these in these predominantly African American communities, where we have the African descendants of slaves? Why are their lives considered unnecessary? When we talk about the Black Lives Matter movement, we have to look, and we have to ask ourselves: Do these Black lives matter? Do these Black lives that are located in St. James Parish — do they matter?

And I have to say, as a clergy, as a pastor, that they not only matter to me, they matter to God. And what we want is for people to take notice that these folks are literally being poisoned each and every day, and they are being told that, “No, your lives don’t matter,” for the sake of profit, for the sake of gain, for the sake of these petrochemical industries. And we hear them crying out.

AMY GOODMAN: There is a cemetery of formerly enslaved people on the proposed building site, Pastor?

PASTOR GREGORY MANNING: Yes, absolutely. This Formosa plastic company has known — they’ve literally been informed — that there is an ancestral burial ground of our enslaved ancestors that they have discovered, and they literally and absolutely don’t care. They are willing to desecrate this cemetery, move the resting place of these enslaved ancestors of ours, to build this Formosa Plastics company that will further ravage the land. And on the day that the warrant was issued for Kate and Anne, we just got done with a wonderful, magnificent celebration of Juneteenth remembering these enslaved ancestors.

That does it for our show. Happy Birthday to Jon Randolph! Please stay safe and wear a mask. I’m Amy Goodman. Thanks so much for joining us. 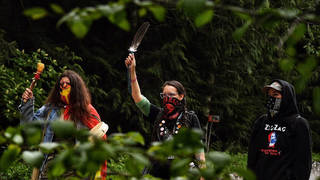