The Protests Made a Huge Difference: All Four Minneapolis Cops Charged in Killing of George Floyd

After more than a week of nationwide protests, all four Minneapolis police officers involved in the killing of George Floyd have been charged with murder or aiding and abetting murder in a case that triggered historic protests across the country. “If you look at the video … the pressure from all three officers on Mr. Floyd’s body contributed to his death,” says activist and civil rights attorney Nekima Levy Armstrong, former president of the Minneapolis chapter of the NAACP. “They heard the man pleading, saying 'I can't breathe,’ and they had a callous disregard for his life.”

AMY GOODMAN: After more than a week of widespread protest across the country, Minnesota Attorney General Keith Ellison has filed charges against all four Minneapolis police officers involved in last week’s killing of African American George Floyd. A second-degree murder charge was added against white police officer Derek Chauvin, who was already charged with third-degree murder for kneeling on Floyd’s neck for eight minutes and 46 seconds while Floyd pleaded for his life, saying repeatedly, “I can’t breathe.” The other three officers — Thomas Lane, Alexander Kueng and Tou Thao — have now been charged with aiding and abetting the murder. Chauvin was arrested last week; the other three officers are also now in custody.

ATTORNEY GENERAL KEITH ELLISON: Today I filed an amended complaint that charges former Minneapolis police officer Derek Chauvin with murder in the second degree for the death of George Floyd. I believe the evidence available to us now supports the stronger charge of second-degree murder. We’ve consulted with each other, and we agree.

ATTORNEY GENERAL KEITH ELLISON: Let me be honest here. I mean, our country has had — has underprosecuted these matters, in Minnesota and throughout the country. And so I think the trust is a result of historically not holding people who are public guardians accountable for their behavior in situations where we should have. So, that, I think, is the origin of the trust problem. But we can’t — we can’t control the past. All we can do is take the case that we have in front of us right now and do our good-faith best to bring justice to this situation. And we will.

AMY GOODMAN: Well, for more, we go directly to Minneapolis, where we’re joined by Nekima Levy Armstrong, civil rights attorney, activist, founder of the Racial Justice Network, former president of the Minneapolis chapter of the NAACP.

It’s great to have you back with us, Nekima. Can you lay out these charges, what exactly they mean, the upgrading of the charge from third-degree murder, which remains, to second-degree murder for Chauvin, and then what it means that these three other officers were also arrested and are in custody for aiding and abetting that murder?

NEKIMA LEVY ARMSTRONG: Well, as you may recall, after the third-degree murder charges came out, several of us in Minneapolis, and specifically attorneys, came against those charges. We raised concerns about the fact that third-degree murder charges were setting Chauvin up for a dismissal and/or ultimately an acquittal, because third-degree charges are similar to someone firing in a crowd and randomly hitting a person and leading to their death. So, under Minnesota law, it is not usually possible to have a conviction in a situation where a specific person is being targeted, as in the case of Chauvin putting his knee on the back of the neck of George Floyd.

And so we believe that second-degree murder charges are much more appropriate in this situation because of the intentionality surrounding Derek Chauvin’s actions in snuffing out the life of George Floyd. And the aiding and abetting charges are also appropriate for the other three former officers involved in killing George Floyd. And that means that they would be held just as culpable as Derek Chauvin for their role in the situation.

NERMEEN SHAIKH: Well, Nekima, the attorney general, Keith Ellison, has said — even though he’s charged these three additional officers, he has warned — I mean, as you’re saying, as well — of the difficulties of actually prosecuting police officers. In fact, one of the three whom he’s now charged already faced a lawsuit for allegedly assaulting an African American man, leaving him with broken teeth and with bruises. This was Mr. Tou Thao, one of the three who was charged. So what is your sense of what is likely to come of this case?

NEKIMA LEVY ARMSTRONG: Well, the hope is that, for once, in the state of Minnesota, an officer who kills an African American person will be convicted. That has not happened yet, partly because most of the time no one is ever charged for killing African American people. And officers typically are not even fired in those situations. So, the public in Minnesota — we know Minnesota is 85% white. And so the public typically supports officer word in a given situation. They typically believe that officers feared for their safety. And as African Americans and other people of color were constantly saying, that is not our reality.

But the flipside of everything is that, you know, we don’t know yet about the composition of the jury. Given that Minnesota is 85% white, it’s very likely that the majority of the jury will be white people. Some may be misinformed. Some may have a good perspective, a positive perspective about the police, making it difficult to actually secure a conviction. But at this moment in time, given the worldwide attention to what happened to Mr. Floyd, my hope is that there is a paradigm shift in terms of public perception and that that translates over to how the jury [inaudible] —

AMY GOODMAN: And, Nekima Levy Armstrong, when you talk about the composition of Minnesota, I mean, it could be that one of the first actions is to challenge the venue of this state murder case. And if it were to go outside of the Twin Cities, that would mean that the jury would be even more white. Is that true? I also wanted to ask you about the significance of what Ben Crump said, the family attorney for the Floyds, saying that he thought that second officer, kneeling on the back of George Floyd, right next to Chauvin, who was kneeling on his neck, was also key in cutting off the air supply for him. The significance of the three of them on top of this man, not just present, as well as what looked like the fourth officer, Thao, the one who’s had a lawsuit against him, looking like a lookout, protecting them from bystanders pleading with the officers to get off Floyd?

NEKIMA LEVY ARMSTRONG: Absolutely. So, yes, if the venue is switched to another place outside of Hennepin County, it will definitely be much more white, which I don’t think will be helpful to securing convictions in this particular case.

Beyond that, yes, if you look at the video, at least from what we can tell, the pressure from all three officers on Mr. Floyd’s body contributed to his death. They heard the man pleading, saying “I can’t breathe,” and they had a callous disregard for his life.

AMY GOODMAN: Finally, the power of the protests in upping the charges to second-degree murder against Chauvin and bringing charges against the other three? This certainly wasn’t the case last week.

NEKIMA LEVY ARMSTRONG: Absolutely. People in the city of Minneapolis, the Twin Cities, folks across the nation and the world all contributed to those charges finally being brought against the other three officers involved in Mr. Floyd’s death, as well as the increase in charges for Chauvin based on his role. We know that those protests made a huge difference and brought worldwide attention to a significant injustice. And now, finally, we can say that first leg of the race has been won. And now we need to move on to the other phases, until there’s a conviction of all four officers involved.

AMY GOODMAN: One last question about Amy Klobuchar. She leaked that the charges were going to be brought yesterday, the senator from Minnesota. And I was wondering if you can talk about the significance of her calling for charges to be brought, but her history, since she is clearly a significant possibility as a vice-presidential candidate along with Joe Biden.

NEKIMA LEVY ARMSTRONG: Well, you know, as we’ve said many times before, Amy Klobuchar’s record as a prosecutor and her failure to hold killer cops accountable should disqualify her from becoming the next vice president of the United States. Many of us feel that Amy Klobuchar’s call for charges is disingenuous, in light of the fact that she never brought charges against killer cops when she was a prosecutor. So, right now it looks like it’s something she’s calling for to benefit herself politically, and we’re not going for it. Amy Klobuchar needs to do right by the African American community and be a champion for criminal justice even when she’s not being considered for one of the highest offices in the land.

AMY GOODMAN: Nekima Levy Armstrong, I want to thank you for being with us, civil rights attorney, activist, founder of the Racial Justice Network, former president of the Minneapolis chapter of the NAACP, as you get ready to head off to the memorial that’s being held in Minneapolis for George Floyd today.

This is Democracy Now! When we come back, Tamika Mallory is our guest. Stay with us. 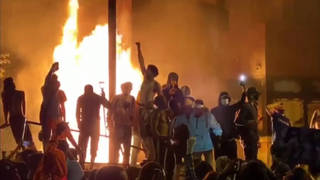 “It Was Murder”: Minneapolis Demands Charges in Police Killing of George Floyd, Calls to Defund Cops