“Get Your Knee Off Our Necks”: At Memorial for George Floyd, Mourners Condemn 400 Years of Racism

In Minneapolis, members of George Floyd’s family, loved ones and supporters gathered for a tribute to his life. During the memorial service, people stood in silence for eight minutes and 46 seconds — the amount of time police officer Derek Chauvin kneeled on Floyd’s neck as he pleaded for his life. We hear the voices of Floyd’s brother Philonise and Reverend Al Sharpton, who urged those gathered “to stand up in George’s name and say, 'Get your knee off our necks!'”

AMY GOODMAN: Thursday marked the first of many memorials for George Floyd. In Minneapolis, members of his family, loved ones and supporters gathered for a tribute. Floyd’s golden casket was covered in red roses. A picture projected on the wall above it showed the mural of Floyd that’s been painted at the street corner where he died. The mural reads, “I can breathe now.”

During the tribute, people stood in silence for eight minutes and 46 seconds, the amount of time police officer Derek Chauvin kneeled on Floyd’s neck as he pleaded for his life. Almost three of those minutes, Floyd was unresponsive.

This is one of George Floyd’s younger brothers, Philonise Floyd.

PHILONISE FLOYD: It was just amazing, everywhere you go and see people, how they cling to him. They wanted to be around him. You know, George, he was like a general. Every day he walks outside, it’d be a line of people, like just like when we came here, wanted to greet him and wanted to have fun with him. Guys that was doing drugs, like smokers and homeless people, you couldn’t tell, because when you spoke to George, they felt like they was the president, because that’s how he made you feel. He was powerful, man. He had a way with words. He could always make you ready to jump and go, all the time.

PHILONISE FLOYD: I’m just — man, it’s crazy, man. All these people came to see my brother, and that’s amazing to me, that he touched so many people’s hearts, you know, because he’s been touching our hearts, you know? You come to Third Ward, where we’re from, people are crying right now. That’s how much they loved him. You know, I’m just staying strong as I can, because I need to get it out. I need to get it out. Everybody wants justice. We want justice for George. He’s going to get it. He’s going to get it.

AMY GOODMAN: That’s George Floyd’s younger brother Philonise Floyd, speaking during the tribute Thursday in Minneapolis, where Reverend Al Sharpton announced he’s joining with the families of people killed by police to organize a march on Washington on August 28th, the 57th anniversary of the historic demonstration for civil rights led by Reverend Martin Luther King Jr. It’s also the day in 1955 Emmett Till was lynched. Reverend Sharpton urged those gathered Thursday to stand up in George’s name and say, “Get your knee off our necks.”

AMY GOODMAN: That’s the Reverend Al Sharpton speaking at the tribute to George Floyd Thursday in Minneapolis, attended by thousands, inside and out.

When we come back, we look at a hearing in the case of Ahmaud Arbery, the 25-year-old African American man who was shot dead after being chased and ambushed by a group of white men in Georgia. We’ll go to Georgia to speak with professor Carol Anderson. Stay with us.

AMY GOODMAN: That’s music from the memorial service for George Floyd in Minneapolis.

Our System Is Corroded: Carol Anderson on Rampant Police Violence and Assault on Voting Rights 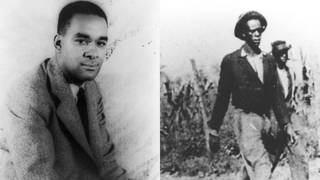