The lead writer for President Trump’s favorite Fox News TV show, “Tucker Carlson Tonight” — the most popular cable show in history — has resigned for posting disturbing racist and misogynist messages to an online forum under a pseudonym. Now Tucker Carlson says he’s going on vacation, and his advertisement blocks “are a wasteland,” says Matt Gertz, senior fellow at Media Matters, where he documents the relationship between Fox News and the Trump administration.

StoryDec 30, 2020“The Truth in Black and White”: The Kansas City Star Apologizes for History of Racist Coverage

AMY GOODMAN: This is Democracy Now! I’m Amy Goodman, with Juan González. We turn now to a scandal at President Trump’s favorite TV channel, Fox News, where the lead writer for Tucker Carlson Tonight — the most popular cable news show in history — has resigned for posting disturbing racist and misogynist messages to an online forum under a pseudonym for years.

Blake Neff stepped down Friday after CNN broke the story that he had posted multiple racist messages on the website AutoAdmit, mocking and degrading African Americans, Asian Americans and women, contributing to threads that used the N-word.

On his show Monday night, Tucker Carlson announced he, too — well, he is going on vacation for the rest of the week, after he addressed the controversy.

TUCKER CARLSON: Blake fell short of that standard, and he has paid a very heavy price for it. But we should also point out, to the ghouls now beating their chests in triumph of the destruction of a young man, that self-righteousness also has its costs. We are all human.

AMY GOODMAN: For more, we go to Matt Gertz. He is senior fellow at Media Matters, where he focuses on the relationship between Fox News and the Trump administration.

Matt, welcome to Democracy Now! Talk about the significance of the chief writer for Tucker Carlson — again, the most popular cable show in U.S. history — him being forced to resign.

I think that this is a big problem for Fox News. It’s incredibly damaging to its advertisers, certainly, to be associated with a program like Carlson’s.

AMY GOODMAN: We can hear you, Juan. Juan?

MATT GERTZ: Fox News has a business model problem. There are two ways Fox makes money. One is off of its viewers. They get a big audience, and then they can sell advertising against that audience. The way that they attract the audience is with bigoted commentary. It’s with red-meat Republican talking points. It’s by creating a space for the hard-right movement in this country.

But advertisers don’t really like that, because, inevitably, it leads to blowups like this. It gets them in trouble, and then they start fleeing. Tucker Carlson’s show at this point, its advertiser blocks are a wasteland. It’s promos for other Fox content and then advertisements for MyPillow, which is a product run by a Republican businessman. And so, Fox is leaving a lot of money on the table because of this. And I think, in the long run, it’s going to be quite damaging to them. They don’t really have a way out of this. They keep getting caught in this cycle of one scandal after another. And the reasons for this —

MATT GERTZ: Yeah. Tucker Carlson is now one of the most powerful media figures in America, and that’s because President Trump is part of his audience. Trump watches a ton of Fox News. He frequently live-tweets the segments that he takes a shine to. He also gets advice from Fox hosts directly. And more often than not, recently, that’s been Tucker Carlson. From strikes against Iran to the coronavirus to, more recently, his attacks on Black Lives Matter and protests, Tucker Carlson’s commentary is shaping the president’s responses to the events that are happening around us. It’s very dangerous.

AMY GOODMAN: I want to thank you, Matt Gertz, for being with us. Now Tucker Carlson says he’s gone trout fishing. Matt Gertz is senior fellow at Media Matters. We’ll link to your latest piece, “Tucker Carlson has said enough.” I’m Amy Goodman, with Juan González. Thanks so much for joining us. Stay safe. 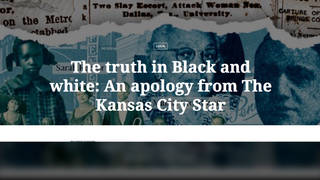