We Are Not Your Mascots: Washington NFL Team Removes Racist Name After Years of Indigenous Protests

The Washington NFL team, whose name and mascot have been a slur against Native Americans for nearly 90 years, announced Monday it will change its racist name, facing mounting pressure from corporate sponsors. The decision is a hard-fought victory for Indigenous activists who for years have demanded the team remove the R-word from its name. It also comes as the Black Lives Matter movement has forced a reckoning about monuments and tributes to racism around the country. We get response from Amanda Blackhorse, a Navajo activist who has led the fight to change the name and logo of the Washington R-dsk-ns football team.

AMY GOODMAN: This is Democracy Now! The Quarantine Report. I’m Amy Goodman, with Juan González. The Washington NFL team, whose name and mascot have been a slur against Native Americans for nearly 90 years, announced Monday it’s changing its racist name, facing mounting pressure from corporate sponsors. The decision is a hard-fought victory for Indigenous activists, who for years have demanded the team remove the R-word from its name. It also comes as the Black Lives Matter movement has forced a reckoning about monuments and tributes to racism around the country.

Earlier this month, FedEx threatened to remove its branding from the team’s stadium if it didn’t change its name — a demand team owner Daniel Snyder has resisted for decades. The move comes after Washington, D.C., removed statues of racist former NFL owner George Preston Marshall, who named the Washington team and was the last owner in the league to sign a Black player. He did so only under federal pressure. The team hasn’t yet decided on a new mascot but says it will include the military in its new name.

Indigenous campaigners are now calling for the Kansas City NFL franchise to follow suit. In a letter to NFL Commissioner Roger Goodell, Native American leaders and organizations have asked that the league, quote, “Ban [all] use of Native imagery, names, slur names, redface, appropriation of Native culture and spiritually as well as violence toward Native Peoples from the League.”

For more, we’re joined by Navajo activist Amanda Blackhorse, who led the fight to change the name and logo of the Washington NFL team.

AMANDA BLACKHORSE: Yes. And good morning, and thank you for having me.

So, recently, what has happened, I think, is a response to the groundswell, especially with the push with the Black Lives Matter movement. You know, this country seems to finally understand what racism is. And as we watched the unrest in this country completely supporting Black Lives Matter, and what happened in Minneapolis in the murder of George Floyd, you know, this issue — there was a resurgence of this issue again. And it seemed to just happen organically as people began to topple statues of colonialism, and, you know, looking towards symbols and epithets, racial epithets, and the Washington team was one of those things.

You know, in 2014, we won our case against the Washington team in a trademark, in trademark law. Since then, we lost our case in 2017 in an indirect ruling in the Supreme Court. And so, since 2017, our case has kind of been dormant. It’s just been there. You know, nothing has really happened as far as this movement goes. Of course, we’ve always put pressure on the team, but what’s been happening in this country really brought this up and brought up this new resurgence of it. And I will say it’s unfortunate that it happened — that it had to happen because of the murder of George Floyd, but, you know, as we’re having the larger discussion of racism and systemic racism in this country, this sort of happened.

And it’s wonderful to see, because I just never thought that this moment would ever happen. Indigenous people, we’ve always been ignored. We’ve always been pushed aside. The more that we have fought, the more that we have protested, it seems like Dan Snyder of the Washington team dug his heels in even further and got more aggressive with us, sued us in court, made that statement that he will never change the name. “You can put that in all caps,” is what he said. And, you know, that’s how we’ve always been treated. And we’ve been fighting this for decades and decades. And so, what we have here now —

AMANDA BLACKHORSE: — is, finally, the owner finally fell to the pressure of his investors.

JUAN GONZÁLEZ: And, Amanda, in terms of the influence of these companies, like FedEx threatening to remove its name from the stadium, because these branding deals by corporations often come with huge, annual, multimillion-dollar payouts, so Snyder was actually facing not only the wrath of the public, but potential huge financial distress. Could you talk about this impact of these corporations finally deciding that because of the Black Lives Matter movement, that they had to make public stances?

AMANDA BLACKHORSE: Yes. So, the investors pushing Dan Snyder, I think, is what really sort of tipped the — you know, pushed him over the edge, really. But what a lot of people don’t know is that that investor push had been going on for many, many years. Indigenous people, Native people have been fighting and have been demanding that the investors — that they divest from racism. You know, FedEx has been one that has been pushed for a very long time, Bank of America, as well. And it came from an initiative from the Investors and Indigenous Peoples Working Group. So, this is not just something that FedEx decided all of a sudden they had a change of heart and wanted to push Dan Snyder to do this; Indigenous people have been pushing them for many, many years. Suzan Harjo can attest to that, as well.

And so, but I think that’s what pushed him eventually to make that change. And I think that just shows you how much money — how powerful money is in this industry. It’s all about money. Like I said, you know, we’ve done everything. We protested. We’ve gone to court. We’ve done all of these things. And it was, at the end of the day, you know, the movement in this country and money that eventually made him do his thorough review.

But we’re not out of — you know, he’s not done. We’re not done with this, because Dan Snyder has talked about how he wants to rebrand, and the coach of the team, as well, has talked about rebranding, to something that honors Native Americans and the military. So, that’s very problematic to me. And in their statement yesterday, they did not make it clear that they are going to rebrand without any Native imagery. All they stated was that they were going to retire their name and their logo.

AMY GOODMAN: I wanted to ask you, quickly, Amanda, about the Kansas City Chiefs, the Cleveland Indians — you’re also asking them to change their names — and the use of the word, what you call the R-word, how the media uses it. You don’t want even people to say it, like the N-word.

But I do want to — you know, when we do talk about the Kansas City team, we’re talking about the Atlanta team, the Chicago team and the Cleveland team, you know, their names — well, the Braves is — it’s a slur. The Chiefs, it’s a slur, as well. Indians? You know, we say American Indian. But it’s the way that it’s used. The terms, you know, they can — the “Indian” word may not necessarily be a racial slur, but it depends on the context of it. And so, that’s why, as I was saying earlier, with Dan Snyder, we’re hoping that they would rebrand without any sort of Native imagery. If he called his team the Warriors, you know, they will still attach Native American imagery onto that, and it will still be harmful to Native people. It won’t be a win at all. It’s just perpetuating the cultural appropriation and stereotypes of Native people.

AMY GOODMAN: Well, Amanda Blackhorse, we want to thank you so much for being with us, Navajo activist who has led the fight to change the name and logo of the Washington R-word. And all the best on the birth of your child. We wish you the very, very best.

AMY GOODMAN: When we come back, we look at President Trump’s favorite Fox News TV show, Tucker Carlson Tonight, how its lead writer has just resigned for posting racist and misogynist messages online. Stay with us.

AMY GOODMAN: “The Rain” by the legendary jazz trumpeter Eddie Gale. He died last week at the age of 78. 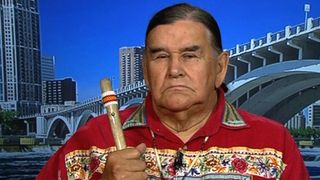