Did the Army Ignore a Soldier’s Murder? Questions Mount over Vanessa Guillén Disappearance

The U.S. Army says it has a suspect in custody in connection with the disappearance of Vanessa Guillén, a missing 20-year-old Fort Hood soldier whose family says her remains were likely found in a shallow grave near the Texas Army base. A second suspect in the case — a soldier who the Guillén family lawyer named as Aaron Robinson — killed himself in Killeen, Texas, as officers approached. The news comes after months of anguish for Vanessa Guillén’s family, who say she was sexually harassed by a higher-up prior to her disappearance and that the military was slow to investigate when she went missing. We get an update from the family’s attorney, Natalie Khawam.

AMY GOODMAN: This is Democracy Now!, democracynow.org, The Quarantine Report. I’m Amy Goodman, as we turn now to the devastating story of Vanessa Guillén, the missing 20-year-old Fort Hood soldier, whose family said Wednesday her remains were likely found in a shallow grave near the Texas Army base Tuesday, ending a painful search that began months earlier when Guillén first went missing April 22nd.

The Army said Wednesday one suspect is in custody in connection with her disappearance, describing her as the estranged wife of a former soldier at Fort Hood, that suspect. A second suspect in the case, a soldier who has not yet been named, took his own life in Killeen, Texas, as officers approached him Tuesday.

This news comes after months of anguish for Vanessa Guillén’s family, who say she was sexually harassed by a higher-up prior to her disappearance and that the military was slow to investigate when she went missing.

Family members gathered in Washington, D.C., Wednesday to demand justice for Vanessa and to ask Congress to launch an independent investigation into the young soldier’s death. Vanessa’s sister Lupe addressed the crowd.

LUPE GUILLÉN: My sister, Vanessa Guillén, was sexually harassed. … They didn’t keep my sister safe. They always try to cover up for each other. Why? My sister’s a human, too. She deserves respect. She deserves to be heard. Because if this can happen to my sister, it can happen to anyone else. … How can this happen on a military base? How can this happen while she was on duty? … They don’t care about us. My sister is an example of it. My sister did not deserve to suffer. My sister did not deserve this.

AMY GOODMAN: Mayra Guillén, Vanessa Guillén’s older sister, also addressed reporters, saying she had met the suspect that reportedly died by suicide Tuesday when she first visited the military base after her sister’s disappearance.

MAYRA GUILLÉN: I really can’t speak on what my family feels at the moment. My mom, she couldn’t make it. She is feeling really ill. … They lied to us since day one. When I first went up to that base, that subject, I met him. Not knowing that he had something to do with it, I felt — something was telling me that he did something. And I wasn’t wrong, apparently. He still had the nerve, that same day, to laugh in my face.

AMY GOODMAN: And this is Vanessa Guillén’s mother Gloria speaking at an emotional news conference last week outside Fort Hood Army base in Killeen, Texas.

We welcome you to Democracy Now! An incredibly emotional news conference yesterday, the family driving from Texas to Washington, D.C. And it’s only there that they learn, after months of demands, that the Army says they found remains. Can you talk about what you understand happened to Vanessa, Natalie Khawam?

NATALIE KHAWAM: Khawam. Sure. Thank you. Yes, we understand that Vanessa was murdered by Aaron Robinson, and he took her body over to that shallow gravesite, where he buried her. And unfortunately, they just found her remains a couple days ago. They are going to confirm this in the next 48 to 72 hours. However, witness statements, and the accomplice to this murder has discussed how it was done, and they believe that this is her remains, because they also have her hair.

NATALIE KHAWAM: Sure. The person that was harassing her, this Aaron Robinson, this was her sergeant. And he had — she was taking a shower one time, and she was in the women’s locker room, and he walked in and sat down and watched her while she was showering. She saw him, and she said, “Please leave. This makes me very uncomfortable.”

You know, she didn’t know how to report it. She did report it to her family. She reported it to her friends. She even reported it to the soldiers on base. When they asked, “Why don’t you report it to, you know, your commander or sergeants and stuff?” and she just said that it wouldn’t work. She was afraid to report it, because she was afraid to lose her job. They would demote her. And she knew of other instances where they did not take those reports seriously, and that would make her life more difficult on the base.

AMY GOODMAN: And he’s the one who took his own life on Tuesday when they approached him?

NATALIE KHAWAM: That’s correct. They had him on the base. They told him not to leave. And he ran on foot. I understand — yesterday, we learned more information. I sat with the CID and the general last night, ’til 8 p.m. last night, and learned a lot of the details as to what occurred. But we understand it was two hours later, after he took off, that they were able to find him in the parking lot, and he took his life.

AMY GOODMAN: And who is in custody then?

NATALIE KHAWAM: This is his accomplice.

AMY GOODMAN: And who is she?

AMY GOODMAN: So, why did it take this long? You hear the emotional news conference of her mother outside Fort Hood — of course, Fort Hood named for a Confederate general, but a massive base in Texas. You’ve been pushing for answers now for months. Was it the cry of the family to say, “We want an independent congressional investigation,” and actually coming to Washington, D.C., that forced the base to actually look for these remains, ultimately finding them, most likely?

And we did what we had to do. I told the family, “Get here to D.C.” They drove over. And unfortunately, right when we got to D.C. — when they got to D.C., they found out that they found Vanessa’s body. And last night, they told us a lot more information.

And at this point now, you know, we are demanding a congressional investigation. This should not happen. Families who let their loved ones go and join the military, they let them to go join the military because they want to serve the country. They don’t go there to get sexually harassed or sexually assaulted.

AMY GOODMAN: This is Hawaii —

NATALIE KHAWAM: They surely don’t go there to go missing.

REP. TULSI GABBARD: We stand here for Vanessa, stand here for justice, and we stand here for every other servicemember who has experienced sexual harassment or assault and did not feel safe reporting it, out of fear of retaliation. … I know and understand how critical it is for our young troops, our young soldiers, to have trust in and faith in their chain of command, which is why these acts of abuse and harassment coming from within that chain of command are so destructive and have such a devastating impact on a young soldier.

AMY GOODMAN: That was Tulsi Gabbard. Natalie Khawam, if you can talk about something you also mentioned yesterday at the news conference, talking about the scores of people who have died at Fort Hood? In fact, as they were looking for the remains of Natalie [sic], they found other bones?

NATALIE KHAWAM: The remains of Vanessa? Yes. They found —

NATALIE KHAWAM: No problem. I get it a lot.

They found Gregory Morales, who was another soldier that went missing last year. I tell you, within the last couple years, there have been several incidences of soldiers killed on the base, missing on the base. There is major human trafficking going on at that base. There’s sex — I mean, there is a ring of sex prostitution rings.

I mean, I’m reading and learning, and I get phone calls. My original area of law is whistleblowing law. And, you know, thank God for all the people; I have eyes and ears everywhere. But when I took on this case, I learned so much about Fort Hood, and people contacting me and giving me hints, information, examples, videos, and saying, “I want you to see what goes on on this base.” And, you know, it’s devastating. It’s devastating to know that our soldiers are on that base and they’re so unsafe.

Yesterday, when I was meeting with a general and I asked him about cameras, they said they didn’t have any cameras. I said, “You’re going to tell me that this base, that got shot up a few years ago, has no cameras?” He said, “That’s correct.” And I said, “Really? Because I’m going to tell you, one of my insiders took the FaceTime and took me through the base and showed me cameras.” And he said that they were not operational. I almost fell over. I said, “So, we now have fake cameras as security?” Fake cameras.

I don’t know what to say other than that base needs to be looked into. They need a congressional investigation. This young woman, who signed up to serve our country, should not have gone missing. You can’t tell me that there’s no cameras, that we couldn’t see what had happened, how he murdered her, because there’s no cameras. Unacceptable.

AMY GOODMAN: Lupe, her younger sister, called for the base to be shut down. If you can talk about the protests outside Killeen right now, and also the whole issue of the family finding out about the bones, you said, from the media, not from the military? She’s a soldier.

I immediately call Tim Miller, who is part of EquuSearch, and I said, “Do you know anything about this bones?” “Oh, yeah, her body. We were walking on her body the whole entire time.” I almost fell over.

AMY GOODMAN: Natalie Khawam, I want to thank you for being with us, the attorney for the family of Vanessa Guillén, the missing Fort Hood soldier whose remains, they believe, have been found in a shallow grave near the Army installation in Texas.

That does it for our show. I thank you so much for joining us. Have a safe holiday. Tomorrow, a Democracy Now! special with Cornel West and Angela Davis. Remember, stay safe and wear that mask. I’m Amy Goodman. Thanks for joining us. 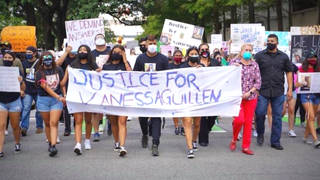