As COVID-19 cases rise and hospitalizations are soaring, hospitals in Florida, Texas, Arizona and California are running out of ICU beds. On Tuesday, Texas set a grim new record of 10,000 new cases in a single day. “It’s been astonishing,” says Pulitzer Prize-winning New York Times correspondent Dr. Sheri Fink, who has been reporting from Houston’s largest hospital. “They’ve been adding unit after unit after unit just to care for coronavirus patients.”

AMY GOODMAN: This is Democracy Now! I’m Amy Goodman, with Juan González. This is The Quarantine Report. More than 60,000 new coronavirus cases were reported in the U.S. Tuesday, a record shattering the previous high. Nearly 3 million people have now tested positive for the virus, and the death toll has topped 131,000, though that number is expected to be far higher. As cases rise, hospitalizations are soaring. Health facilities in Florida, Texas, Arizona and California are running out of ICU beds.

On Tuesday, Texas set a grim new record of 10,000 new cases in a single day. Despite this, the Texas Republican Party still plans to hold its in-person state convention in Houston next week. Mayor Sylvester Turner went on CNN Tuesday, pleaded for the Republicans to reconsider.

MAYOR SYLVESTER TURNER: Bringing 6,000 people together indoors over a two-to-three-day event is not good on any level, not in the midst of a pandemic. And so, I just would hope and pray that they will take into account the employees who would have to service that convention, the employees’ families, the delegates themselves, the people in this city, and the people in the cities and the towns and cities that they are coming from. So, I will continue to believe that wiser heads will prevail and that people will recognize that this is a pandemic and people are dying and people are getting infected, and that the numbers in the state are going up and not going down.

AMY GOODMAN: The New York Times has been reporting extensively from inside Houston’s hard-hit hospitals. In a moment, we’ll be joined by Pulitzer Prize-winning journalist Dr. Sheri Fink, who’s featured in this new video by The New York Times.

DR. SHERI FINK: We are here at Houston Methodist Hospital, which is the largest hospital in Houston. And right at this moment the number of coronavirus cases is really rising dramatically in the city.

How does it feel similar or different to March?

DR. ARIC BAKSHY: This is the surge.

DR. SHERI FINK: Although they had a moderate peak in April, now they’re more than double the peak that they ever reached at that time, and the numbers look like they’re going to just keep rising.

DR. ARIC BAKSHY: Since March, we’ve had a trickle of patients. Everyone was — everyone stayed at home. People were not really getting sick in numbers that would overburden the system.

In fact, some of us cut our shifts down because there weren’t enough patients to see. Since probably Memorial Day, it’s been a lot busier. Every patient who comes into the hospital now, we’re testing for COVID.

Dr. Sheri Fink, thanks so much for joining us. If you can talk first about Houston and what you’re finding there, you having come from the epicenter covering what had happened here in New York, as the epicenter switches and shifts to Houston?

DR. SHERI FINK: Yes, there are a lot of similarities, unfortunately, and some differences. We can talk about both. But the similarities are just the numbers. The numbers of new patients, they are stressing the hospitals here. The hospital that I’ve been embedded with, Houston Methodist Hospital, which is the largest hospital in Houston, as you heard, has just been — it’s been astonishing. They’ve been adding unit after unit after unit just to care for coronavirus patients. And they can do that. Meanwhile, there’s a safety net system, those hospitals who are there to treat people who tend to be disproportionately affected by coronavirus, and they are just completely full and transferring their patients out. So, this is very similar to New York in that way.

JUAN GONZÁLEZ: And, Dr. Fink, in terms of some of the differences, though, it would seem that, at least in the early days of the pandemic, especially on the East Coast, there were massive shortages of personal protective equipment, of the ability to test patients. How has those factors played out now in this, months later, in places like Texas?

DR. SHERI FINK: So, you would think, months later, we would have some of the systems in a better way. And certainly, personal protective gear, there does seem to be more of that, although there have been some backups in getting certain pieces of that protective gear.

But the testing is similarly a problem. This is a huge problem here. I think some of my colleagues did a really nice piece yesterday about this backup in testing. But I’m seeing it affecting the hospitals. So, first of all, it’s very hard to get a test here. You have to schedule it maybe some time in advance. And then, to get those results back is taking many days.

Now, in the hospitals, when they get backed up, that is a problem, because when a person comes into the hospital at this point, when coronavirus is quite widespread in the community, they need to know whether that person should go on a coronavirus ward or on a non-coronavirus ward, or just how to treat them. So, this is very, very important to get those test results back. And, you know, there are backups. We’re seeing that around the country. The labs are backed up.

AMY GOODMAN: I mean, this is absolutely astounding. As President Trump puts enormous pressure to open up the economy around the country, we are seeing this increasing lack of testing, the shortage of testing. We’re showing lines of people in Texas, cars that are waiting something like eight to 12 hours. In Arizona, the same thing, the lines are something like eight to 10 hours. Testing facilities are just shutting down. Sometimes after five minutes, they run out. If you could talk, Dr. Sheri Fink, about both the importance of, I mean, this lack of testing and the lack of masks, or President Trump not wearing a mask? Actually, the governor of Texas just recently saying masks must be worn, though it took a long time for Governor Abbott to get to this point, but why that’s so important?

DR. SHERI FINK: That’s right. In the piece that you talked about that ran over the weekend, it explored the differences and the similarities with New York. And the head of Houston Methodist system, medical system, he said that one of the things that is really striking him, and that if he could have one thing back from March, that awful time that we had in New York — but the one thing was that there was unity in terms of the measures needed to stop that spread. So, you remember there was a national shutdown for a while, a pause, and at least you had the federal and the state and the local officials on the same page for that brief period of time.

The problem now, as you said, is that because there’s been such a division amongst officials who are giving messages to the public, the public is confused. And so, there are people getting the coronavirus, and the doctors are saying, you know, “Who can blame them?” They don’t know — you know, with such mixed messages, it’s very hard for a person in the public to really know who to trust. And maybe you trust that official who you voted for.

So, yes, now it does seem that there is this focus, this importance of the masks. And there is some hope in the medical community that the universal masking, if everybody is wearing a mask, that that will start to drive down some of these numbers, and maybe is starting to have a little bit of an effect.

But I don’t go out much here, but when I’ve — you know, going back and forth to the hospital, I do see young people not masking. And that is — you know, the public health officials here and the medical folks are very concerned about that, because you have — the other big difference is you have a younger patient population, which means that they generally are a little bit healthier. There are definitely critically ill people, and I’m watching some of the people I met the first day, who were young, going through getting sicker, some in the ICU. But generally, they’re healthier.

The problem is: Do those young people then infect older people who may be more vulnerable, or people with underlying conditions who are doing their best to stay safe? I’ve seen it over and over again. I’ve met very few patients who were the ones out partying. It’s the ones who caught it from a family member who had an essential job — that’s what I’m seeing — or a small family gathering that they thought was safe, that included some younger members of the family. Those are the people who are ending up in the ICUs here, just by random selection who I’m tending to meet.

AMY GOODMAN: Dr. Sheri Fink, we have to break, but we’re going to come back to you. Dr. Fink is a New York Times correspondent, Pulitzer Prize-winning journalist and writer. She is executive producer of the Netflix docuseries Pandemic: How to Prevent an Outbreak and author of the widely acclaimed book on the aftermath of Hurricane Katrina titled Five Days at Memorial: Life and Death in a Storm-Ravaged Hospital. She’s reporting from the hospitals most hard hit by COVID-19, from New York to Houston. Stay with us. 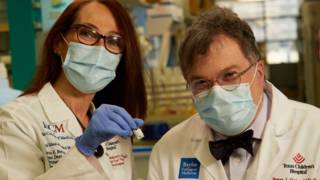