President Trump’s latest executive orders to extend unemployment benefits and defer payroll taxes may be unconstitutional. Democrats had hoped to extend a program to give unemployed workers an additional $600 in weekly benefits and to extend a federal moratorium protecting some renters from evictions, but failed to overcome opposition from Republican lawmakers. Under Trump’s order, unemployed workers would continue receiving an additional $400 a week, but only once states put up a quarter of the money and set up a new system to distribute the payments — a process that could take months. Trump also signed an executive order on evictions that does not extend the federal moratorium on evictions, and ordered a deferral of payroll taxes that will still need to be paid back next year, after the election. Trump’s executive orders amount to “political theater,” says David Dayen, executive editor of The American Prospect, but could “set a really dangerous precedent” for the separation of powers in the future.

President Trump signed four executive orders Saturday, including measures to extend unemployment benefits and defer payroll taxes, after Congress failed to agree on a new coronavirus bill. But it does not look like those unemployment benefits will necessarily be seen by people who are unemployed. A number of Republican lawmakers joined Democrats slamming Trump’s actions as unconstitutional.

Democrats had hoped to extend a program to give unemployed workers an additional $600 in weekly benefits and to extend a federal moratorium protecting some renters from evictions. Under Trump’s order, unemployed workers would continue receiving an additional $400 a week, but only once states put up a quarter of that money and set up a new system to distribute the payments, a process that could take months, if they can afford it at all.

Trump also signed an executive order on evictions, but it won’t stop any evictions from happening. It simply instructs the Treasury Department and the Department of Housing and Urban Development to consider taking action.

Trump also ordered the deferral of payroll tax collections for workers earning under $100,000, but the taxes will still need to be paid back next year, after the election. And Trump vowed to pursue the permanent elimination of the payroll tax, which is used to fund Social Security and Medicare, if he’s reelected.

SPEAKER NANCY PELOSI: While it has the illusion of saying we’re going to have a moratorium on evictions, it says, “I’m going to ask the folks in charge to study if that’s feasible.” When he says he’s going to do the payroll tax, what he’s doing is undermining Social Security and Medicare.

AMY GOODMAN: Still with us, David Dayen, executive editor of The American Prospect, where he writes a daily update on the coronavirus pandemic called “Unsanitized.” His book is just out; it’s titled Monopolized: Life in the Age of Corporate Power.

So, David, talk about what happened this weekend. Talk about these executive orders, these executive actions, and what they mean. Start with unemployment, such a severe crisis in this country right now.

DAVID DAYEN: Yeah. So, talks between Democrats and the White House broke off, and as a result, Trump decided to go forward with these executive orders. And as you mentioned, there’s a lot less than meets the eye here.

On unemployment, as you say, it’s $400 a week, which is much less, of course, than the $600-a-week boost that had been given. States are supposed to supply a quarter of that. States are obviously very cash-strapped right now. It’s supposed to come from a budget that has already been given to the states, but a lot of that money is already spoken for. As for the $300 that the federal government is supposed to supply, that comes from a fund for disaster relief, FEMA disaster relief. And so, as you say, it’s done under a different program that has to be now put into the state unemployment systems, which are very rickety. Some of them use programming code that is decades and decades old. And the last time, when the $600 boost came in, that took weeks in some states to actually get done. And the amount of money that’s being appropriated for this purpose would only last maybe five weeks tops, even though it’s supposed to extend until December.

DAVID DAYEN: I’m not sure that that is true, but the problem is that you have to get the system to actually work correctly. And each state, there’s no sort of each state getting that $300. Each state has to do it, and it’s first come, first served. And if the money is drained, it’s drained. There’s only $44 billion appropriated. So, you know, you could see the faster states getting up to speed, and states that might take months to get this done getting just locked out at the door, and their unemployed residents end up getting no benefit whatsoever. Even a state that is, quote-unquote, “fast” about this, residents are probably not seeing any unemployment extended benefits until at least September.

AMY GOODMAN: So, Trump walked out of his announcements this weekend — by the way, he’s holding these news conferences and announcements at his private golf club in New Jersey —

DAVID DAYEN: Yeah, in front of —

AMY GOODMAN: — with the people around him — describe the scene.

DAVID DAYEN: Yeah, in front of country club — yeah, in front of country club members, who pay to be there and were pretty vocal, I think, during a couple of these press conferences. That is where he, in fact, signed these. And, you know, it’s very much just sort of political theater. The question is, while I do believe that these are unconstitutional — Congress has the power of the purse, he’s reprogramming funds — who is exactly going to sue over this and deny workers even a meager amount of unemployment benefits? I think that this is going to set a really dangerous precedent that executives have much more power in the fiscal realm than previously thought.

AMY GOODMAN: As the government is giving billions to companies, for example, around viruses, some that have never — around vaccines, that have never even made vaccines. I mean billions and billions of dollars. What about the moratorium on evictions?

DAVID DAYEN: I mean, it’s an non-proposal. It’s an order that says, “Hey, HUD and Treasury, come up with something. Help us out. Maybe don’t allow people to be evicted or foreclosed upon.” It is not an extension of the moratorium in any way, either on evictions or on foreclosures. It’s completely unknown what steps will be taken by Treasury or the Department of Housing and Urban Development in exchange. And it protects really nobody. The only protections that are in place are at the state level, and many of those are expiring. And, of course, when you take away that $600-a-week support from unemployment, a lot of these unemployed residents are going to be — many of whom are renters — are going to have trouble making that next rent payment. The Census Bureau put together a thing called the Household Pulse Survey, and it shows about one-quarter of Americans who are renting fear that they’re not going to be able to make that next payment.

AMY GOODMAN: And talk about the payroll tax, Trump basically saying — what this means for Social Security?

DAVID DAYEN: Yeah. It’s a deferral, so it’s — you know, you’re eventually going to have to pay that. I suspect a lot of businesses will just put that money in escrow, so that they’re not told later down the road, “Oh, you have to pay all that,” and then garnishing their employees’ checks to the tune of entire checks’ worth. So, I suspect this will have almost no stimulative effect. If Trump succeeds in making this permanent, of course, he would need Congress to do that. But that would be a complete undermining of the system of funding for Social Security and Medicare. And Democrats obviously jumped right on that, you know, after the announcement was made.

AMY GOODMAN: Well, we have to leave it there. I want to thank you for being with us, David Dayen, executive editor at The American Prospect, where he writes a daily update on the coronavirus pandemic called “Unsanitized.”

And that does it for our show. Democracy Now! produced with Mike Burke, Renée Feltz, Deena Guzder, Libby Rainey, Nermeen Shaikh, María Taracena, Carla Wills, Tami Woronoff, Charina Nadura. I’m Amy Goodman. Thanks so much for joining us. Stay safe. 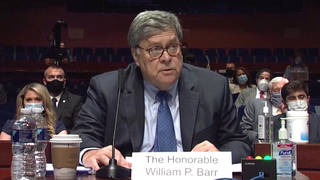