At the second night of the Republican National Convention in Charlotte, speakers largely ignored the devastating public health and economic crisis facing the country as the U.S. death toll from the coronavirus nears 180,000 and tens of millions of Americans are out of work and struggling to pay for food and housing. We feature excerpts from the night, which included praise for President Trump’s actions in the Middle East and more dire warnings about a Joe Biden presidency, as well as several speeches that appear to violate the Hatch Act, which prohibits federal employees from using their office for partisan political activity.

AMY GOODMAN: This is Democracy Now! We’re breaking with convention. I’m Amy Goodman, with Juan González, as we turn to day two of the Republican National Convention. For a second night in a row, speakers largely ignored the devastating public health and economic crisis facing the country as the U.S. death toll from the coronavirus nears 180,000 and tens of millions of Americans are out of work, struggling to pay for food and housing. One of President Trump’s top economic advisers, Larry Kudlow, spoke about the crisis in the past tense, even though the U.S. recorded over 1,100 deaths just yesterday.

LARRY KUDLOW: Then came a once-in-100-year pandemic. It was awful. Health and economic impacts were tragic. Hardship and heartbreak were everywhere. But presidential leadership came swiftly and effectively, with an extraordinary rescue for health and safety, to successfully fight the COVID virus. A great bipartisan rescue also saved the economy.

AMY GOODMAN: On the foreign policy front, Senator Rand Paul claimed Trump is the most antiwar president in a generation, despite Trump’s escalation of the air war in Afghanistan and other countries.

AMY GOODMAN: Other speakers on Tuesday night included Nick Sandmann, a Catholic high school student from Kentucky, who was filmed smirking as he and other students surrounded a Native American elder in Washington, D.C., last year, after the students mocked participants in the Indigenous Peoples March.

NICK SANDMANN: Advancing their anti-Christian, anti-conservative, anti-Donald Trump narrative was all that mattered. And if advancing their narrative ruined the reputation and future of a teenager from Covington, Kentucky, well, so be it. That would teach him not to wear a MAGA hat.

PAM BONDI: As a career prosecutor and former attorney general of Florida, I fought corruption, and I know what it looks like, whether it’s done by people wearing pinstripe suits or orange jumpsuits. At the Democrats’ convention, we were told to look at Joe Biden as the model of integrity. But when you look at his 47-year career in politics, the people who benefited are his family members, not the American people.

AMY GOODMAN: While Bondi attacked Biden’s nepotism, she made no reference to how the Trump family has profited over the past four years. This comes as the Trump administration is facing accusations it’s broken the law by using the powers of the federal government to aid the president’s reelection campaign during the convention, part of it being held right at the White House. Two key parts of the RNC took place inside the White House. Trump pardoned a man who was convicted of bank robbery and went on to start a nonprofit to help formerly incarcerated people reenter society. Trump also held a naturalization ceremony for five immigrants from Bolivia, Lebanon, India, Sudan and Ghana.

PRESIDENT DONALD TRUMP: You have earned the most prized, treasured, cherished and priceless possession anywhere in the world. It’s called American citizenship.

AMY GOODMAN: President Trump’s son Eric also spoke Tuesday night, just a day after New York Attorney General Letitia James moved to force him to testify as part of a probe into the Trump Organization’s corruption, inflation of assets in order to secure loans and other benefits. Eric Trump serves as executive vice president of the Trump Organization.

ERIC TRUMP: The Democrats want an America where your thoughts and opinions are censored when they do not align with their own. President Reagan said, “Freedom is never more than one generation away from extinction. It must be fought for, and it must be protected.” This is the fight that we are in right now, and it is a fight that only my father can win.

AMY GOODMAN: Kentucky’s first African American attorney general, Daniel Cameron, also spoke Tuesday night. He made only a passing reference to his most high-profile case: the police killing of Breonna Taylor, the African American 26-year-old EMT who was shot dead inside her own home in Louisville in March. Cameron has so far not charged any of the officers involved.

ATTORNEY GENERAL DANIEL CAMERON: It was General Dwight Eisenhower, a future Republican president, who said, “Democracy is a system that recognizes the equality of humans before the law.” Whether you are the family of Breonna Taylor or David Dorn, these are the ideals that will heal our nation’s wounds. Republicans will never turn a blind eye to unjust acts, but neither will we accept an all-out assault on Western civilization.

AMY GOODMAN: Secretary of State Mike Pompeo addressed the Republican National Convention from Jerusalem, where he’s on a work trip. House Democrats have accused him of violating the Hatch Act which prohibits federal employees from participating in political activities. Earlier this year, the State Department issued a memo stating, quote, “Senate-confirmed Presidential appointees may not even attend a political party convention or convention-related event,” unquote. During his remarks, Pompeo praised Trump’s actions in the Middle East.

SECRETARY OF STATE MIKE POMPEO: The president, too, moved the U.S. Embassy to this very city of God, Jerusalem, the rightful capital of the Jewish homeland. And just two weeks ago, the president brokered a historic peace deal between Israel and the United Arab Emirates. This is a deal that our grandchildren will read about in their history books.

AMY GOODMAN: The second night of the Republican National Convention ended in the White House garden with first lady Melania Trump, one of the first speakers of the convention to acknowledge the soaring U.S. death toll from the coronavirus.

MELANIA TRUMP: I want to acknowledge the fact that since March, our lives have changed drastically. The invisible enemy, COVID-19, swept across our beautiful country and impacted all of us. My deepest sympathy goes out to everyone who has lost a loved one. And my prayers are with those who are ill or suffering.

AMY GOODMAN: Melania Trump spoke in front of a live audience in the Rose Garden, where the vast majority of attendees, including President Trump and Vice President Mike Pence, did not wear masks. CNN reports many attendees were not tested for coronavirus prior to the event. When the reporters asked the White House what is the coronavirus policy at this convention at the White House, they said you’d have to ask the campaign, and the campaign said they’re relying on a coronavirus consultant, but didn’t go further than that. 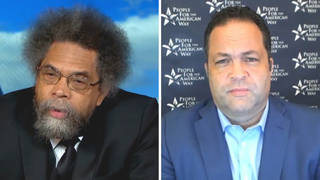