Vice President Mike Pence headlined the third night of the Republican National Convention, focusing largely on preserving law and order and attacking Joe Biden. We play excerpts of the comments made by Pence, who made no mention of police brutality or the recent police shootings that have sparked protests across the U.S. Pence also failed to mention the white gunman accused of killing two protesters in Kenosha, Wisconsin.

StoryJan 11, 2021Fascism Scholar: Strongman Trump Radicalized His Supporters; Turning This Back Will Be Very Hard

AMY GOODMAN: This is Democracy Now! We are breaking with convention. I’m Amy Goodman.

VICE PRESIDENT MIKE PENCE: President Trump and I will always support the right of Americans to peaceful protest. But rioting and looting is not peaceful protest. Tearing down statues is not free speech. And those who do so will be prosecuted to the fullest extent of the law.

Last week, Joe Biden didn’t say one word about the violence and chaos engulfing cities across this country. So let me be clear: The violence must stop, whether in Minneapolis, Portland or Kenosha. Too many heroes have died defending our freedom to see Americans strike each other down. We will have law and order on the streets of this country for every American of every race and creed and color.

President Trump and I know that the men and women that put on the uniform of law enforcement are the best of us. Every day, when they walk out that door, they consider our lives more important than their own — people like Dave Patrick Underwood, an officer in the Department of Homeland Security’s Federal Protective Service, who was shot and killed during the riots in Oakland, California. Dave’s heroism is emblematic of the heroes that serve in blue every day. And we’re privileged tonight to be joined by his sister Angela. Angela, we say to you, we grieve with your family, and America will never forget or fail to honor officer Dave Patrick Underwood.

AMY GOODMAN: While Vice President Pence focused on the killing of federal security officer David Patrick Underwood, he left out a key part of his murder. The man charged with Underwood’s death was not a Black Lives Matter protester, but an Air Force staff sergeant with ties to the far-right “boogaloo” movement, which has used protests against police brutality as a cover to carry out violence. Cassie Miller of the Southern Poverty Law Center recently spoke with Democracy Now! about Steven Carrillo, who was charged with Underwood’s murder.

CASSIE MILLER: We know that he is a staff sergeant in the military and that this was one of — sort of just one violent plot that we’ve seen from the “boogaloo” movement. Carrillo went to a federal courthouse and opened fire on two security officers, killing one of them. And then, when law enforcement tracked a van used in that attack to his residence, he ambushed those law enforcement officers and killed another. What we know is that he is connected to the “boogaloo” movement from his online footprint and from things that were found on the crime scene, like a “boogaloo” patch that was found in his van.

The “boogaloo” as a term is used to describe an upcoming civil war. Or in more extreme circles, it’s used to refer explicitly to a race war. So, the “boogaloo” movement doesn’t have, really, a singular ideology. It kind of runs the gamut of the far right. So the people who associate with it are everything from libertarians to people who are overtly racist. What we know is that all of them are united in this belief that the United States is tyrannical and that it needs to be overthrown in a second civil war. And that’s something that they are actively preparing for and that many believe are inevitable. And we have seen people like Carrillo, who are going out and trying to commit acts of violence alongside these protests to try and increase civil unrest, with the goal of pushing towards the second civil war. 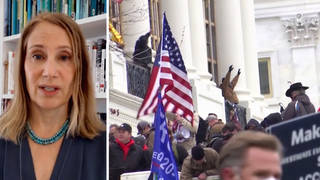 Fascism Scholar: Strongman Trump Radicalized His Supporters; Turning This Back Will Be Very Hard