In a bombshell report a month before November’s presidential election, The New York Times reveals Donald Trump paid no federal income taxes in 10 of the last 15 years, and just $750 in federal income taxes in both 2016 and 2017. “We don’t have to just take his word for the fact that he paid lots of taxes. We can see in the documents that he didn’t,” says Elie Mystal, justice correspondent for The Nation who has written about the legal fight over Trump’s tax returns. “If those documents are wrong, Donald Trump can release his taxes and show us what he claims is the real truth.”

StorySep 29, 2020David Cay Johnston: Trump Deserves to Be Jailed, But System Is Set Up to Let Rich Avoid Paying Taxes

AMY GOODMAN: We begin today’s show looking at the bombshell report in The New York Times that reveals Donald Trump paid no federal income taxes in 10 of the last 15 years, and he paid just $750 in federal income taxes in both 2016 and 2017. The Times published the report after obtaining more than two decades of Trump’s tax return data. On Sunday, Trump called the report “fake news,” but he continues to refuse to release his tax returns.

The reporting paints a picture of Trump as either an inept entrepreneur or a criminal tax cheat. For years he has reported massive losses in some of his key business projects, including more than $300 million on his golf courses and $55 million on his hotel in Washington, D.C. He’s used the losses to offset his taxable income in other areas.

The New York Times also reveals the president has been locked in a battle over taxes with the IRS over a $73 million tax refund he claimed after his casino business in Atlantic City collapsed. Trump could be forced to pay over $100 million if he loses that fight. In addition, the Times reports Trump has more than $300 million in loans he personally guaranteed that will soon come due. The Trump family also reduced its tax bill by paying nearly $750,000 in so-called consulting fees to Ivanka Trump while she was an employee of the Trump Organization.

Former Department of Justice Inspector General Michael Bromwich responded to the report by writing on Twitter, quote, “Trump knew something we didn’t when he started balking at the peaceful transfer of power. If he loses the election, he faces federal and state prosecution for bank fraud, tax fraud, wire fraud, and mail fraud, as does his entire family. No OLC memo will spare him,” he said.

We begin today’s show with Elie Mystal, The Nation's justice correspondent, author of the magazine's new monthly column, “Objection!” He has reported on the legal fight over Trump’s tax returns.

Welcome back to Democracy Now!, Elie. Can you talk about the significance of this bombshell report in The New York Times?

ELIE MYSTAL: Yeah, it’s a doozy! Look, I go back on this to Michael Cohen, Trump’s former lawyer and fixer’s testimony before Congress. Michael Cohen told us all what the game is. He said that Trump inflates his assets when it helps him — for instance, to get on the Forbes richest people in the world list — and he deflates his assets when it helps him — for instance, to hide his income on his tax returns. Michael Cohen testified to this in front of Congress. Now, the tax documents that were leaked to The New York Times and they reported on do not prove Michael Cohen’s story. But if Michael Cohen was talking the truth, this is what the tax documents would look like.

AMY GOODMAN: So, you tweeted last night, “the thing about the tax leak is that while tax avoidance is legal, tax evasion is not.” Explain.

ELIE MYSTAL: So, I mean, look, at certain high levels — and this is a thing that we fight about a lot politically — but at certain levels of the economy, there are all sorts of tricks wealthy people can do to avoid paying taxes. It’s one of the reasons why tax lawyers are so smart and well paid, right? There are tricks. There are things that you can do. Decreasing your taxable income with losses from one side of the ledger to offset huge gains on another side of the ledger is commonplace. There are various tax avoidance schemes that are legal, that are perfectly legal. We can argue about whether or not they should be legal, but it is clear that they are legal, right?

To make it work, you kind of just have to be really bad at something. Trump happens to be really bad at business, according to these documents, and that is how he is able to fritter away something along the lines of $434 million he earned from The Apprentice and other licensing deals. That’s tax avoidance 101, if what he’s saying in the documents is absolutely true.

ELIE MYSTAL: However — I’m saying, however, there’s also the possibility that the tax documents are fraudulent. And if they’re fraudulent, there is a lot a suggestion here that what we could be looking at is not tax avoidance, it could be the Michael Cohen allegation of tax evasion, which is in fact a crime.

AMY GOODMAN: So, on Sunday night, President Trump held a news conference right as The New York Times was dropping their bombshell report.

AMY GOODMAN: So, Elie Mystal, you tweeted last night there’s something he could do to prove this.

ELIE MYSTAL: He could just release his tax returns, which has promised to do multiple times throughout the course of his presidency. This audit excuse is now — is now known to everybody, right? We know what the audit is about. It’s the $95 million he paid in taxes to the IRS that he then got a $72.9 million refund on later. That’s what the audit’s about. Everybody knows that now. Great, we’re done. So now he can just release his taxes, right? Like, he can just go to his file cabinet, you know, open the drawer and send out his 2019 tax returns, if he is so — if he is calling this fake news.

Like, we can’t just accept anymore this blanket “fake news” story. What exactly is fake, President Trump? Is it fake that you paid your daughter $750,000 while she was an employee, potentially to lower your tax bill? Is it fake that you called your Westchester property in Bedford, New York, a business and wrote off $2.2 million in property taxes as business expenses? Is that fake, or did you actually do that? Because those are the questions now. We don’t have to just take his word for the fact that he paid lots of taxes. We can see in the documents that he didn’t. And if those documents are wrong, Donald Trump can release his taxes and show us what he claims is the real truth. Super simple.

AMY GOODMAN: The New York Times says, “This time around, he is personally responsible for loans and other debts totaling $421 million, with most of it coming due within four years. Should he win re-election, his lenders could be placed in the unprecedented position of weighing whether to foreclose on a sitting president.” He owes $421 million, Elie Mystal.

ELIE MYSTAL: And we don’t know to who. Like, that is the thing, like, of all of the stories here. Some of it is just kind of hilarious incompetence on Trump’s part. Some of it is perhaps criminal tax evasion. The loan, the outstanding loans, is a threat to American sovereignty. And I am not being hyperbolic when I say that.

One of the reasons why we find large amounts of outstanding debt disqualifying for many positions in the federal government is that it’s a hook into corruption, right? Like, the people who you owe money to might have leverage over you as you execute your duties. The fact that he owes this much money, the fact that we don’t even know who he owes the money to, and the fact that he, apparently, according to his taxes, has no legitimate way of paying the money, all makes him a compromised person. And for a compromised person to be running the American government is a kind of textbook bad egg, that counterterrorism experts and the like have warned us about from the beginning with this man. So, from a governmental kind of integrity of government perspective, the outstanding loan money is actually the biggest story for people to focus on.

AMY GOODMAN: And The New York Times is promising to publish more stories, and the first debate between him and Joe Biden is Tuesday night. Elie Mystal, stay with us, because we’re going to move to another top story this weekend, and that is President Trump’s nomination of Amy Coney Barrett to be justice on the Supreme Court. Stay with us. 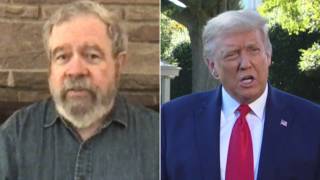