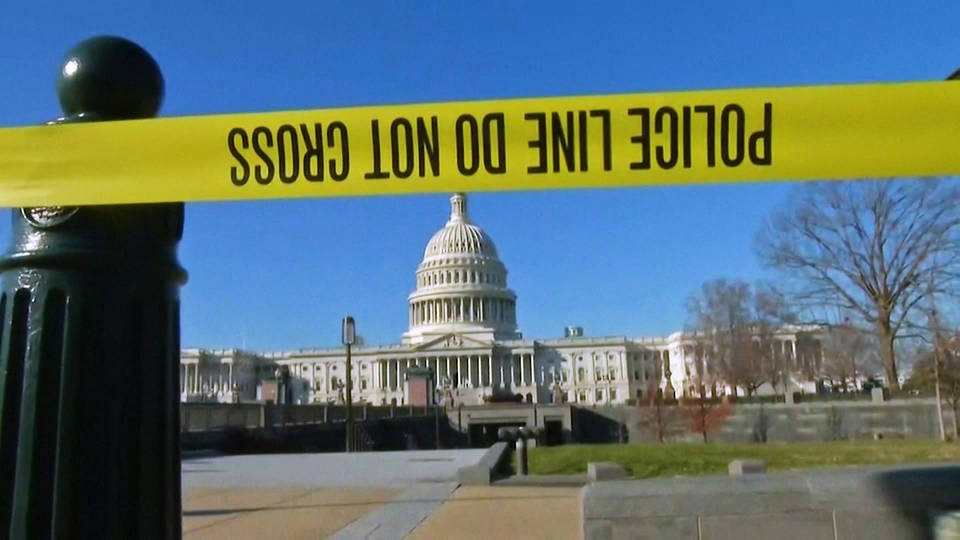 Momentum is building to remove President Trump from office following the violent attempted coup last Wednesday that saw an angry mob of Trump-backed insurrectionists storm the Capitol, resulting in five deaths. House Democrats are introducing a resolution formally calling on Vice President Mike Pence to invoke the 25th Amendment. House Speaker Nancy Pelosi says if Pence does not move to do so, the House will proceed with impeachment — for the second time in Trump’s single term. Pence has reportedly not ruled out using the 25th Amendment. California Congressmember Ted Lieu said an article of impeachment with at least 210 co-sponsors in the House will be introduced today. The draft resolution cites “incitement of insurrection.”

Sen. Pat Toomey: “I think the best way for our country, Chuck, is for the president to resign and go away as soon as possible. … The president spiraled down into a kind of madness that was different.”

Republican Senators Ted Cruz and Josh Hawley are also facing increasing pressure to resign over their obstruction of the certification of electoral votes. Over 5,000 lawyers and law students have signed a petition urging their disbarment.

As fear grows of an increasingly unhinged Trump, House Speaker Nancy Pelosi told her caucus Friday she had spoken to General Mark Milley, chair of the Joint Chiefs of Staff, about safeguards that are in place should Trump seek to initiate a nuclear attack. 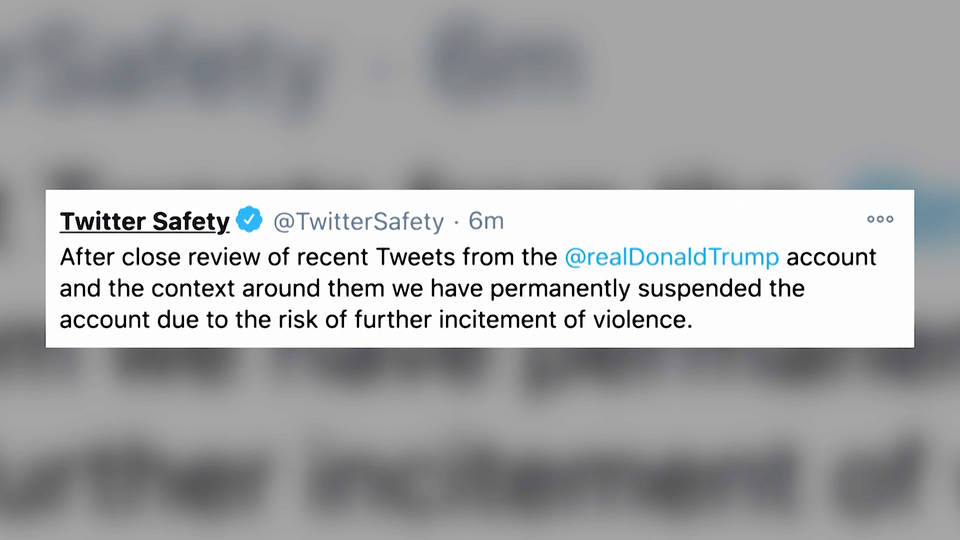 Twitter permanently removed President Donald Trump from its platform Friday, citing repeated violations of Twitter’s terms of service and the risk he would further incite violence ahead of Joe Biden’s inauguration on January 20. The ban came a day after Trump posted this video message to his Twitter feed.

President Donald Trump: “To all of my wonderful supporters: I know you are disappointed, but I also want you to know that our incredible journey is only just beginning.”

Meanwhile, Apple, Google and Amazon Web Services ended their support for the social media network Parler over the weekend, which bills itself as Twitter without rules. The companies say Parler’s managers have consistently failed to halt threats of violence and calls for armed insurrection on the site. Parler was co-founded by Republican donor and Trump supporter Rebekah Mercer, daughter of hedge fund billionaire Robert Mercer.

And in another move from Big Tech, the payment processing company Stripe cut ties with the Trump campaign, which has continued to fundraise, saying it violated its policies against encouraging violence. More information is emerging about the domestic terrorists behind the January 6 insurrection at the Capitol. Over the weekend, authorities arrested Eric Munchel and Larry Brock, who were photographed in the Senate chambers wearing tactical gear and carrying plastic handcuffs. Munchel carried a pistol on his hip.

Others arrested include Cleveland Grover Meredith Jr., who threatened to shoot House Speaker Nancy Pelosi in the head on live TV; Arkansas pro-gun activist Richard Barnett, who boasted of looting mail from Pelosi’s office; and West Virginia state lawmaker Derrick Evans, who live-streamed himself storming the Capitol. Rioter Robert Keith Packer of Virginia was arrested after he was filmed wearing a shirt emblazoned with the words “Camp Auschwitz” and “Work Makes You Free” — a reference to the Nazi death camp.

Also arrested was Doug Jensen, who was filmed chasing a Black police officer up the stairs of the Capitol, and Trump-supporting QAnon conspiracy theorist Jacob Anthony Chansley, also known as Jake Angeli, who posed for photos on the Senate dais carrying a spear and wearing a headdress made of coyote skin and buffalo horns.

Details have emerged about the death of Rosanne Boyland, a 34-year-old QAnon and Trump supporter from Georgia who was trampled by the mob as it stormed the Capitol. Boyland was photographed Wednesday carrying a Gadsden flag — a Revolutionary War-era emblem of a rattlesnake with the caption “Don’t Tread on Me.”

The Southern Poverty Law Center is demanding an investigation into the Republican Attorney Generals Association, which set up robocalls urging Trump supporters to join the January 6 insurrection in Washington, D.C. The group is headed by Alabama Attorney General Steve Marshall. On Sunday, hundreds of police officers lined the streets of Washington, D.C., in a funeral procession for Brian Sicknick, the Capitol Police officer killed when marauding Trump domestic terrorists hit him in the head with a fire extinguisher. Sicknick was a military veteran who later became an opponent of the Iraq War and George W. Bush, and was an outspoken supporter of President Trump.

Meanwhile, the Capitol’s attending physician is warning members of Congress they may have come in contact with someone infected with coronavirus as they spent hours sheltering in a protective isolation room as Trump supporters rampaged through the Capitol. Video shows several Republican lawmakers refusing to wear face masks inside the cramped space. The United States reported over 300,000 new COVID-19 cases for the first time Friday, as the death toll is nearing 375,000. Daily new cases are on the rise in almost every state. As frustration mounts over the slow rollout of the coronavirus vaccine, President-elect Joe Biden said he will release all available vaccines when he comes into office. But some health experts warn the strategy could backfire if authorities fail to administer second doses in a timely manner.

New York has loosened rules in recent days around who is eligible for vaccines, after reports of medical providers throwing out doses because they could not find patients who matched the state’s strict vaccination guidelines. Teachers, pharmacy workers who interact with the public, and New Yorkers 75 years and older are now able to get vaccinated. The Javits Center is set to become a mass vaccination center in New York City. Around the world, global coronavirus cases have topped 90 million, with deaths approaching 2 million.
In Britain, cases topped 3 million with over 81,000 deaths. London Mayor Sadiq Khan says the city is at a “crisis point,” and has declared a “major incident” as hospitals risk becoming overwhelmed.

Japan said it found a new variant of the coronavirus in four passengers who recently arrived from Brazil. Authorities say it has similarities to those identified in Britain and South Africa, but are still looking into whether it causes more severe illness.

China has sealed off two cities south of Beijing as officials rush to contain its biggest outbreak in six months.

Iran’s Supreme Leader Ayatollah Ali Khamenei announced he is banning coronavirus vaccines from the U.S. and the U.K. Cuba said Friday it had signed a deal with Iran to transfer the technology for its COVID-19 vaccine candidate and will carry out trials in Iran. 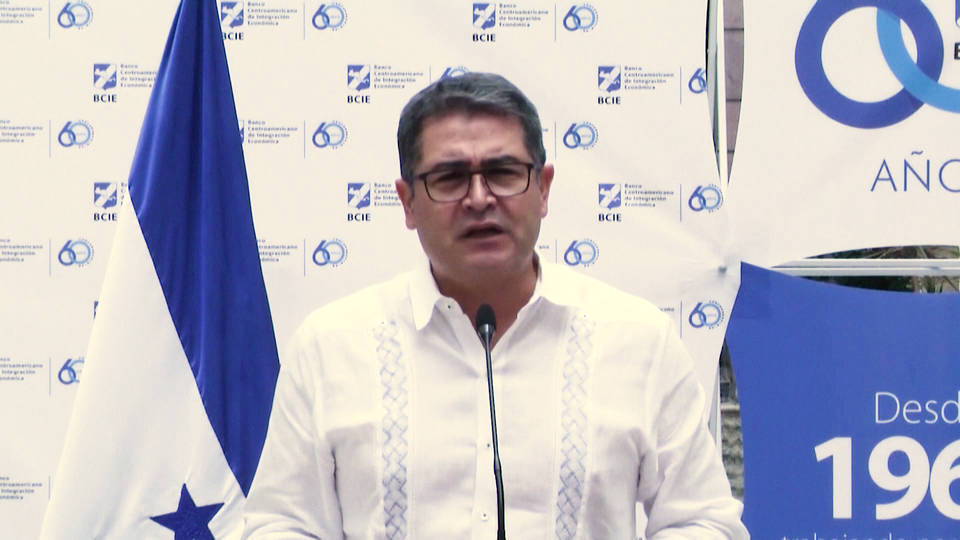 Federal prosecutors are accusing Honduran President Juan Orlando Hernández of taking bribes from drug traffickers and ordering local armed forces to protect cocaine labs and shipments. A motion filed in New York Friday quotes Hernández saying he wanted to “shove the drugs right up the noses of the gringos by flooding the United States with cocaine.” Hernández has been a loyal ally to the U.S., receiving the support of the Obama and Trump administrations despite long-standing accusations of human rights violations and involvement with drug cartels. In Indonesia, search and rescue operations continue after a Boeing 737-500 aircraft carrying over 60 passengers crashed into the Java Sea Saturday, just minutes after taking off from the capital Jakarta. Authorities on Sunday said they had found parts of the plane and its black boxes, with no sign of survivors. Among those on board were three babies and seven children. It’s still unclear what triggered the crash. Secretary of State Mike Pompeo said the U.S. will designate Yemen’s Houthi rebels as a terrorist group. Aid groups warn the designation will only deepen the world’s worst humanitarian crisis by deterring outside actors from engaging with the group and carrying out essential transactions. The move could also hinder efforts of the incoming Biden administration to reestablish diplomatic links with Iran, which has ties to the Houthis.

Sadyr Japarov Wins Kyrgyz Election, Months After He Was Sprung Free from Jail In Kyrgyzstan, Sadyr Japarov declared victory in a snap presidential election that was called after protests toppled the government in the fall. Japarov was serving a jail sentence for kidnapping a provincial governor — a charge he denied — before protesters sprung him free in September and he was installed as both prime minister and president. Preliminary results show Japarov receiving around 80% of votes in Sunday’s election, with a turnout of around 40%

Women Accounted for All of 140,000 Net Jobs Shed by U.S. Economy in December 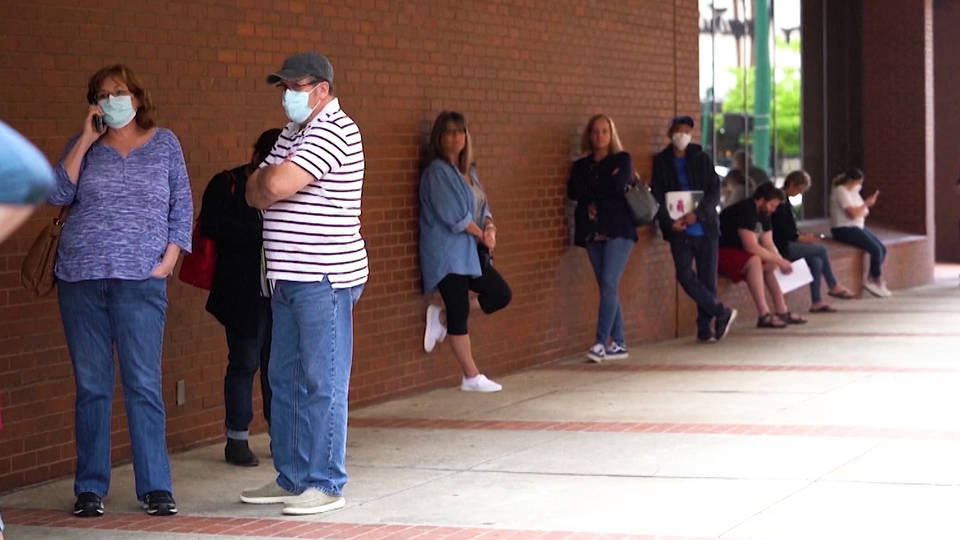 In economic news, the U.S. lost 140,000 jobs in December. Jobs held by women, mostly Latina and Black women, account for the net loss, with restaurant and bar workers suffering the highest numbers.

This comes as The Guardian reports nearly every state has failed to meet federal requirements to distribute enhanced unemployment benefits within three weeks to most recipients. Benefits for some 14 million people expired on or before December 26 — a day before President Trump signed the latest stimulus bill into law, leading to lapses.

Joe Biden is unveiling his proposal this week to provide trillions of dollars in pandemic relief funds, which includes plans to increase direct relief to $2,000 per person. Biden spoke Friday as he formally introduced the newest members of his economic team.

President-elect Joe Biden: “We need more direct relief flowing to families, small businesses, including finishing the job of getting people the $2,000 in relief, direct payment. Six hundred is simply not enough when you have to choose between paying rent, putting food on the table, keeping the lights on.” In Cabinet news, Joe Biden will nominate former career diplomat William Burns to head the CIA. Burns is president of the Carnegie Endowment for International Peace and served in the U.S. Foreign Service for over three decades. During President Obama’s administration, he was involved with talks that led to the landmark Iran nuclear deal, from which Trump later unilaterally withdrew. In an essay last year, Burns wrote about Trump and the elections, “If he loses, I doubt that he will suddenly embrace the traditional bipartisan commitment to effective transitions. … [A]t worst, he’ll seek to contest or undermine the result.” The Washington Post is reporting Trump pressured Georgia’s top elections investigator to “find the fraud” in another phone call he made to Georgia officials in an attempt to overturn election results. Experts say the call could constitute obstruction of justice or other criminal violations. Sister Helen Prejean, one of the world’s best-known anti-death-penalty activists, is asking Justice Department attorneys to “stand down” from the three remaining federal executions scheduled to take place this week in the last days of Trump’s time in office. “Stand down from these killings. Just walk away from them. Do your other work, but not this,” she writes, alongside the ACLU’s Denny LeBoeuf. Lisa Montgomery is scheduled to become the first woman to be executed by the federal government in nearly 70 years tomorrow, Tuesday.